"The public, quite rightly, is very concerned that the government is putting themselves above the law and making themselves untouchable." 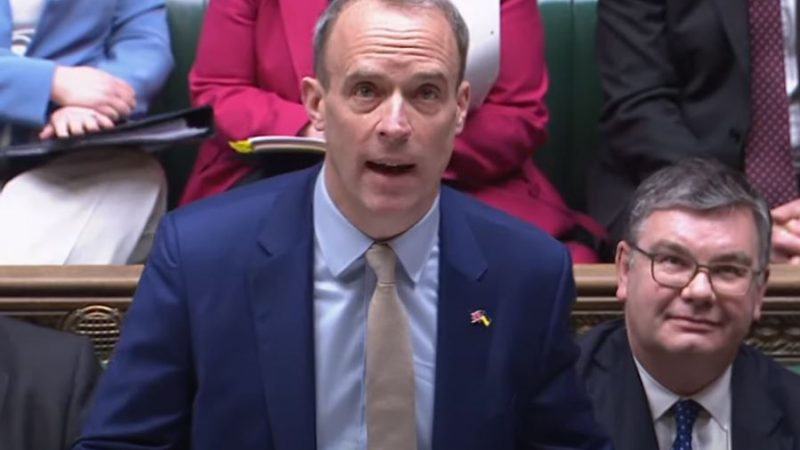 Just over a week ago, a last-minute intervention by the European Court of Human Rights (ECHR), forced the government to cancel its first deportation flight to Rwanda.

This week, justice secretary and deputy prime minister Dominic Raab, shared more information about legislation that seeks to prevent such future interventions, by ensuring ECHR case law “does not always need to be followed by UK courts.”

Known as the ‘Bill of Rights’, the legislation was introduced to Parliament on June 22, and is poised to rescind the 1998 Human Rights Act, which sets out the fundamental rights and freedoms everyone in Britain is entitled to. It also enshrines the rights set out in the ECHR into domestic British law.

Speaking in the House of Commons this week, Raab said: “Our Bill of Rights will strengthen our proud tradition of freedom, it will demarcate a clearer separation of powers, it will ensure greater respect for our democratic institutions, and it will better protect the public and restore a healthy dose of common sense to the justice system – which is essential for commanding public confidence.”

Not everyone however shares the justice minister’s faith in the Bill, with opposition parties, law professionals, and human rights organisations, condemning it as ‘disgraceful’ and ‘a con.’

‘Speak Up for Human Rights’

A ‘Speak Up for Human Rights’ petition aimed at stopping the justice secretary’s plan to “rip up our human rights act.,” has already garnered almost 75,000 signatures.

Launched by Liberty, an organisation dedicated to challenging injustice, defending freedom and campaigning to make sure everyone in the UK is treated fairly, the petition calls on Dominic Raab to abandon plans to ‘overhaul’ the Human Rights Act.

Describing the ‘disgraceful’ Bill as aiming to make the government ‘untouchable’, Liberty renamed the Bill of Rights as a ‘Rights Removal Bill.’

According to the human rights organisation, in creating a new ‘permission stage’ of proceedings, the government’s ‘scandalous’ plan would make it much more difficult to challenge abuse of someone’s right in court.

Taking a direct quote from the Bill, the group informs how the legislation will make it so public authorities no longer have to “actively protect someone’s human rights.” The Bill will mean the European Court of Human Rights cannot act in emergencies, to avert “a real risk of serious and irreversible harm,” which, according to Liberty would essentially give the government a licence to break the law irreversibly “like they tried to with the Rwanda flights.”

Talking about the petition to LFF, Charlie Whelton, policy and campaigns officer at Liberty, said:

“In a functioning democracy, we must be able to hold the powerful to account and have our voices heard. By scrapping the Human Rights Act, the government is making it far harder for us to access our human rights and to challenge public bodies when our rights are violated.

“More than 75,000 people have already signed our petition calling on Dominic Raab to abandon his plans to weaken our human rights. The public, quite rightly, is very concerned that the government is putting themselves above the law and making themselves untouchable. It is the Human Rights Act that protects us all from abuse by the state. The government must listen to the concerns of the people they represent and abandon these proposals. Our rights must be safeguarded, not discarded.”

On June 21, a letter was sent to the justice secretary coordinated by the same campaign group, calling for the Bill of Rights to be subjected to “robust consideration.” The letter says the proposals set out in the Bill are of “supreme constitutional significance and have the potential to impact on the rights of individuals for many years to come”.

‘A lurch backwards for British justice’

The human rights advocacy group is not alone in sharing contempt towards the government’s Bill of Rights. Law professionals have voiced similar dismay over the legislation.

Stephanie Boyce, president of the Law Society, an independent body that supports and represents solicitors, describes the Bill as a “lurch backwards for British justice.”

“The erosion of accountability trumpeted by the justice secretary signals a deepening of the government’s disregard for the checks and balances that underpin the rule of law.

“The Bill will create an acceptable class of human rights abuses in the United Kingdom – by introducing a bar on claims deemed not to cause ‘significant disadvantage’.

“It is a lurch backwards for British justice. Authorities may begin to consider some rights violations as acceptable, because these could no longer be challenged under the Bill of Rights despite being against the law.

“Overall, the Bill would grant the state greater unfettered power over the people, power which would then belong to all future governments, whatever their ideologies,” Boyce continued.

Responding to Raab’s statement on the Bill to MPs, shadow solicitor general Ellie Reeves MP described the legislation as a ‘con.’

“This is not a Bill of Rights, it’s a con… This Bill will take away a duty of the state to protect everyone from harm, by removing the positive obligations set out in the Human Rights Act.

“It will force victims of crime seeking justice to schlep to [the ECtHR in] Strasbourg, creating endless delays and red tape,” said Reeves.