‘This latest raft of measures is likely to have a chilling effect on the right to protest in England and Wales.’ 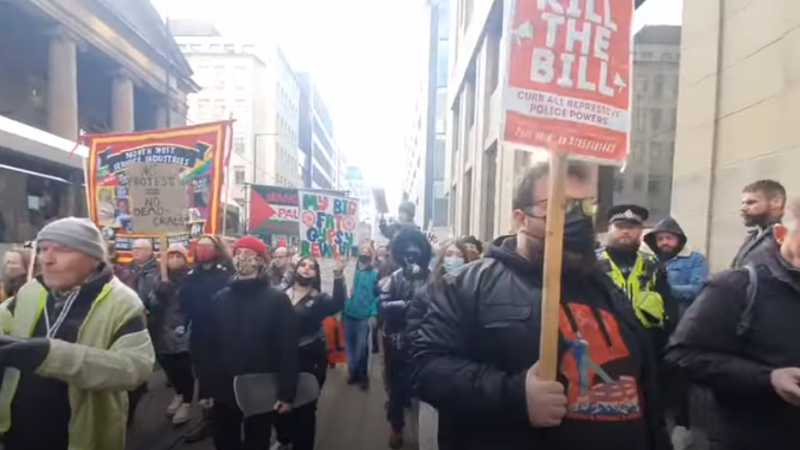 The committee, which is made up of MPs and peers to scrutinise matters relating to human rights, says new policing powers in the draft Public Order Bill threaten fundamental freedoms guaranteed in the European Convention on Human Rights.

The government has introduced the Bill to give police in England and Wales greater powers to deal with protests that are peaceful but disruptive. Amending the law on protest in the heavily criticised Police, Crime, Sentencing and Courts Act 2022, the Bill includes new criminal offences for ‘locking-on’, and disrupting transport works and national infrastructure. It will also give greater powers for stop and search.

In its Legislative Scrutiny: Public Order Bill, published today, the JCHR warns that parts of the draft Public Order Bill threaten fundamental freedoms guaranteed in the European Convention on Human Rights and is calling for key measures of the legislation to either be scrapped or watered down.

Definitions mapped out in the Bill are, according to the Committee, ‘broad and imprecise.’ ‘Locking-on’, for example, could include actions as simple as linking arms with another individual, yet could result in a prison sentence of up to 51 weeks, the Committee warns. It also notes of how obstructing major transport works “covers actions that do not and are not intended to cause significant disruption.”

New stop and search powers would, according to the Committee’s report, allow police to carry out searches without reasonable suspicion, leaving peaceful protestors at risk of ‘arbitrary, discriminatory and invasive treatment.’

Additionally, the Bill would create Serious Disruption Prevention Orders. The Committee says this would prevent people from being able to exercise their rights to protest, and represents a “disproportionate response” to the disruption which may result.

Joanna Cherry QC and SNP MP for Edinburgh South West, who is acting chair of the Joint Committee on Human Rights, said:

“The right to peaceful protest is a cornerstone of a healthy democracy, it should be protected. The law must strike a careful balance between the right to protest and the prevention of disruption to the wider population. This requires a nuanced approach, yet in reaction to what it perceives as overly disruptive protests the government has decided to take a blunderbuss to the problem.”

Cherry continued that everyone has the right to protest within reasonable limits. Noting how the police already have a range of powers to act against protests that are violent or excessively disruptive, the MP said the draft Bill would “tip the balance, putting peaceful protestors at risk of being criminalised, leaving people fearful of severe consequences for minor infractions.” She says it “lowers the bar for prosecution while significantly ramping up the penalties, putting protected rights at risk.”

“We have called on the government to revise the Bill to ensure that new offences are clearly and precisely defined so that they encompass only truly disruptive offences, and to take the burden of proving reasonable excuse away from the defendant. They must also remove the provisions that allow stop and search without reasonable suspicion and that introduce Serious Disruption Prevention Orders.

“The right to protest is too important to be chipped away at. The government must revisit this Bill and ensure it fully respects one of our key democratic principles,” the acting JCHR chair added.

In May, Priti Patel said of the Bill: “What we have seen in recent years is a rise in criminal, disruptive and self-defeating guerrilla tactics, carried out by a selfish few in the name of protest.

“This Bill backs the police to take proactive action and prevent such disruption happening in the first place. These measures stand up for the responsible majority and it is time that parliament got behind them,” the home secretary added.