Following exposure of 'repugnant' treatment of the lowest-paid staff at No 10, there has been an outpouring of solidarity towards cleaners and security staff across the UK. 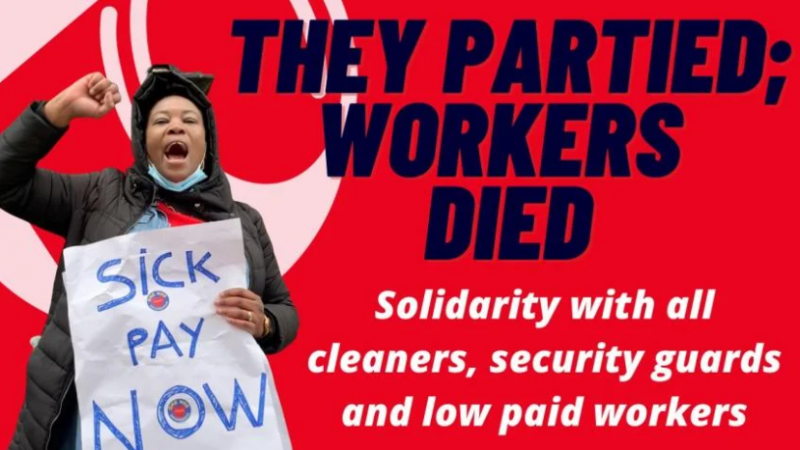 One of the most disconcerting findings of the Sue Gray report was the ‘contempt’ shown towards cleaners and other ‘frontline staff’ at No 10.

Gray said she learned of “multiple examples of a lack of respect and poor treatment of security and cleaning staff.”

“I found that some staff had witnessed or been subjected to behaviours at work which they had felt concerned about but at times felt unable to raise properly.

“I was made aware of multiple examples of a lack of respect and poor treatment of security and cleaning staff,” the civil servant wrote.

The report went on to describe a gathering on December 18, 2020, which was attended by 25 – 40 people, in which Secret Santa gifts were exchanged and alcohol was consumed.

“A cleaner who attended the room the next morning noted that there had been red wine spilled on one wall and on a number of boxes of photocopier paper,” it noted.

BBC Panorama exposed allegations that a security guard at Downing Street was mocked for attempting to break up one of the illegal gatherings.

Flood of support for low-paid workers

Following the publication of the report, there has been an outpouring of solidarity towards cleaners, security staff and other low-paid workers across the UK.

On May 27, security guards, cleaners and other service industry workers gathered in Downing Street in protest of Whitehall’s “culture of disrespect” towards low-paid workers.

The demonstration was organised by the United Voices of the World (UVW) union, a grassroots trade union for low paid, migrant and precarious workers, which represents cleaners and security guards in government buildings.

UVW is fighting for full sick pay and the London Living Wage for the cleaners and workers it represents.

Representing outsourced cleaners at the Ministry of Justice (MoJ), the protesters called for justice for Emanuel Gomes, a cleaner and UVW member, who tragically lost his life in April 2020 after experiencing Covid-19 symptoms. Unable to afford taking a sick day, Emanuel was forced to come into work when he was ill, and his death, according to UVW, could have been potentially avoided if he had had access to a sick pay scheme.

“We’re not in the least bit surprised by the revelations in the Sue Gray report. We have thousands of members who work as cleaners and security guards and these workers face disrespect and discrimination on a daily basis in offices and government buildings across London, not just in Downing Street.

“It is outrageous to have rowdy and illegal parties during the pandemic but to then expect cleaners to mop up after you and to pay them, as well as porters and security guards poverty wages, and deny them full sick pay is abhorrent.

“Most of the cleaners and security guards out there are ethnic minority workers, Black, brown and migrant people, who are disproportionately impacted by poor working conditions and racialised inequalities.”

People of diverse professions and backgrounds have been voicing their support of cleaners in the wake of the findings of the Sue Gray report.

“I remember my mum telling me, how people treat the cleaners in their workplace, tells you everything you need to know about who they are,” tweeted Dr Sonia Adesara.

“My parents would have my guts for garters if I wasn’t polite to cleaners, etc. A porter was taking me to the operating theatre, and I asked his name. He was surprised, no one even the doctors had asked his name. Fortunately for me their surgery was a lot better than their manners,” one Twitter user wrote.

Labour was quick to join the condemnation of the poor treatment of cleaners and security guards at Downing Street outlined in Gray’s report.

Labour MP Bell Ribeiro-Addy, said that the parties “exemplify the Tories’ total disrespect towards the very key workers who got our country through the worst phase of the pandemic.”

“The treatment and mockery doled out to cleaning and security staff that has now been exposed is beyond shameful.

Meanwhile, the Trade Union Congress referred to a comment George Osborne made about cleaners at Downing Street.

“One of the things I remember most about living in Downing Street was how amazingly friendly, generous and kind the team who keep the place going are – the clearers, custodians, front of house and the police. Working all hours, not very well-paid, but always there for us,” Osborne had tweeted.

The ‘not very well-paid’ part of the comment was what was leapt on, with the TUC noting that the former chancellor could have paid them more.

In April 2021, Clean for Good, the ethical cleaning company with a social purpose, called for all cleaners to be paid a real living wage.

“Low paid cleaners can’t afford to wait for the government to make the changes they need. It’s down to us. We must ensure all cleaners are paid a real Living Wage,” wrote Tim Thorlby, managing director of Clean for Good.

As proven in Sue Gray’s damning report, instead of providing them with the reverence and reward they deserve, the government has continued to treat these low-paid with disparagement and disrespect.