‘It is sad to see a government more obsessed with holding on to their own power and influence, rather than using that power to support the very many people who face what seem like unsurmountable obstacles, just to get by.’ 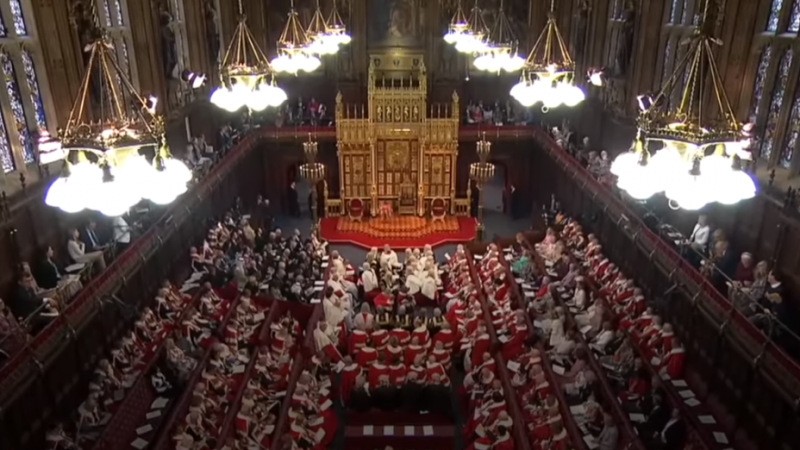 What The Telegraph describes as “the glorious pomp and ceremony of the Queen’s Speech” has been widely criticised for doing nothing to help people struggling through the worse drop in living standards since the 1950s.

The speech was delivered by the Prince of Wales, who careered through 38 different legislative bills which will now be considered by the houses of Commons and Lords.

The speech was written by the government and is used to formally outline its proposed policy and legislation priorities for the coming 2022 – 2023 Parliamentary session.

A ‘brief mention’ of the cost of living

The May 10 speech has been condemned for failing to put forward specifics to ease the cost-of-living crisis or expressing any urgency, while choosing to prioritise plans to tear up the Human Rights Act and privatise Channel 4.

“There was a brief mention that the government would prioritise helping to ease the cost of living for families, but then no actual bills announced outlining how.

The Energy Bill that did get a mention was the government’s plan for the transition to green energy. The Bill will purportedly outline how the UK plans to end unabated fossil-fuelled energy generation by 2035.

However, concerns that the Bill won’t go far enough in tackling the energy and cost-of-living crisis have been raised, with many pointing to its flaws.

Among those expressing scepticism is Green Party MP Caroline Lucas, who said: “An Energy Security Bill is to be welcomed, but it rings hollow if it fails to provide a retrofit revolution – a mass programme of heat pumps and home insulation, designed to slash household energy bills, reduce energy demand, and cut emissions while we’re at it.

“We desperately needed the government to tackle the root cause of our energy and climate security problem, and adopt a fossil fuel treaty to keep fossil fuels in the ground,” Lucas added.

Gap between government rhetoric and action becoming a ‘chasm’

Kate White, executive director of advocacy and campaigns at the World Wide Fund for Nature (WWF), shared similar concerns, warning of the growing gap between rhetoric and action.

“To level up the UK  while levelling down energy bills, we cannot afford for the environment to be an afterthought, but today the UK government has failed to set out the transformative changes that are needed to address the food and fuel crises, build long-term resilience, deliver on net-zero and restore nature,” said White.

“The gap between this government’s rhetoric and action is becoming a chasm. Failure to put sustainability at the heart of the new legislative agenda is a betrayal of the promises made just months ago at COP 26, like aligning the UK financial sector with net-zero, undermining our resilience at the very moment when we need to be shoring it up,” she continued.

The Labour leader Keir Starmer said the speech showed the government had no guiding principle, while accusing Johnson of delivering a “pathetic” response to the cost-of-living crisis.

Talking to the House of Commons, Starmer said: ““The first great challenge our country faces is the cost-of-living crisis.

“This government’s failure to grow the economy over a decade combined with its inertia in the face of spiralling bills means that we are staring down the barrel of something we haven’t seen in decades, a stagflation crisis,” he continued.

‘We can do better’

Away from the Commons, other politicians took to social media to share disappointment over the Queen’s Speech.

In a Facebook post, Ruth George, Labour councillor of Whaley Bridge and former MP for the High Peak, shared her discontent on the proposed policy and legislation priorities for the coming Parliamentary session laid out in the Queen’s Speech.

“As we see the effects everywhere of our cost-of-living crisis, the climate change crisis and a developing housing crisis, we all rely on our government to tackle the big issues and support ordinary people.”

“Today’s Queen’s Speech may be full of sound and fury, but it signifies almost nothing – no Employment Bill, no cost-of-living support, nothing to tackle climate change. Its main bills are about shoring up political support for the Conservatives – privatising Channel 4, clamping down on protests, creating more layers of government as with the proposal for mayor for Derbyshire and Nottinghamshire.

“It is sad to see a government more obsessed with holding on to their own power and influence, rather than using that power to support the very many people who face what seem like unsurmountable obstacles, just to get by.

“We can do better,” said George.