'While people were staying at home to protect the NHS, the Prime Minister was engaging in drinking and debauchery that makes a mockery of the gut-wrenching sacrifices each and every person made.' 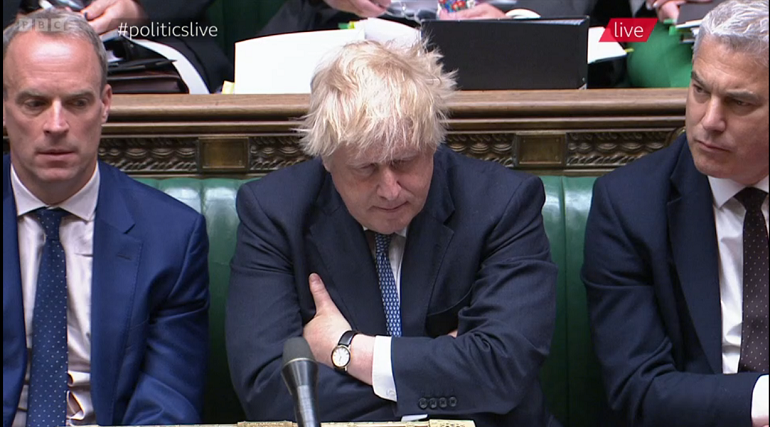 Inevitably, the Sue Gray report featured heavily in this week’s Prime Minister’s Questions. While Sir Keir Starmer and other MPs focused their questions on the cost of living crisis, the SNP’s leader in the House of Commons Ian Blackford savaged the Johnson on the ‘partygate’ scandal.

Speaking on the report, which was released minutes before PMQs, Blackford accused Johnson of ‘engaging in drinking and debauchery’. He went on to call for the Prime Minister’s resignation. Blackford said, “The reports [of] the Prime Minister and Downing Street’s lawbreaking have been damning. Empty bottles littering offices, rooms so crowded that people were sitting on each other’s laps. And security forced to intervene because the parties were so outrageous. At the centre was the Prime Minister orchestrating it, grabbing a glass for himself in order to toast the party goers.

“For eight months, we’ve heard every excuse under the sun. But now we’ve all seen the damning photo evidence. While people were staying at home to protect the NHS, the Prime Minister was engaging in drinking and debauchery that makes a mockery of the gut-wrenching sacrifices each and every person made. Will the Prime Minister now take the opportunity and resign?”

“The reality is no apology will ever be enough for the families of people who lost loved ones, for the families who followed the rules, who stayed at home whilst their nearest and dearest to them were dying, and are now forced to look at photographs of the Prime Minister surrounded by drink, toasting to a party in the middle of a lockdown. If the Prime Minister will not accept that he must resign, then the Tory benches must act. This Prime Minister who has broken the law and shown a cavalier attitude to the truth cannot be allowed to remain in office. Prime Minister, time is up, resign before this house is forced to remove him.”

This week’s PMQs was followed by a statement by the Prime Minister on the Sue Gray report, in which he said “I take full responsibility for everything that took place on my watch.”