An attempt by Boris Johnson to join in the TikTok craze and appeal to youngsters spectacularly backfired, as Gen Z’ers seized the chance to say what they think about the way the country is being run, while poking plenty of fun. 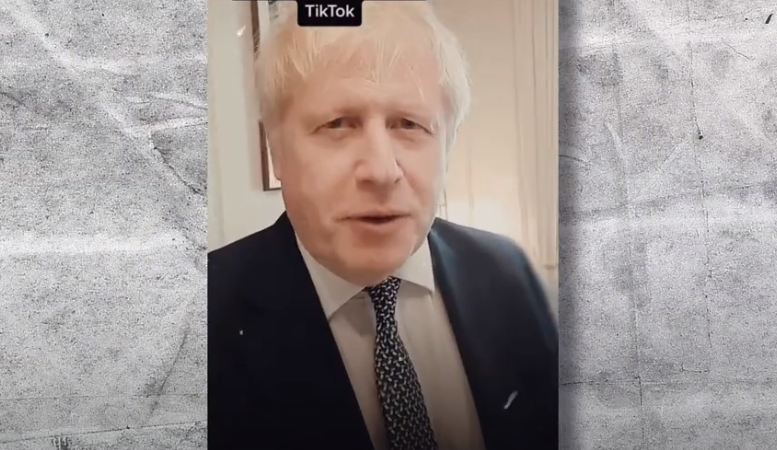 With Michael Gove’s bizarre Scouse-impersonating interview on BBC Breakfast, and Boris Johnson posting his debut video on TikTok, those running the country have had an odd week.

In a move to seemingly connect with younger voters, Johnson launched a No 10 TikTok page to bring ‘behind-the-scenes’ activity by the government to the popular video-focused social networking channel.

Urging viewers to “tune in to No 10 TikTok,” the PM attempted to make a joke, saying “you won’t necessarily catch me dancing on here, but we will have all sorts of stuff about what we’re doing to deliver on our priorities, deliver for you on our agenda on uniting and levelling up our country.

“This is intended to be a place where we can put out messages and behind the scenes insight into what we are getting done,” said Johnson in the debut video.

The account quickly garnered a barrage of followers, and the video racked up millions of views in no time.

However, the flurry of reaction wasn’t complimentary, as Gen Z’ers seized their chance to say what they think about the prime minister and the way the country is being run, while poking plenty of fun.

Calls for the PM to resign

Calls were made for Johnson to resign, with one user saying: “Boris, if you want to help, step down and resign.”

Another suggested he should do a “packing video for when you move out.”

Others took a more serious stance, raising questions about the cost-of-living crisis.

“Country going into recession, so the government made a TikTok to help us,” one user said.

“Can you do a TikTok on how people on low income can manage with the higher cost in living?? I’d love to see you cope on minimum wage for the month!” another wrote.

Naturally, Partygate was brought up, with mocking comments asking for advice on how to host discreet house parties. As was ‘Wallpapergate”, with users asking for a tour of the PM’s newly furbished flat.

A second video featuring Johnson and Sunak titled, “Your priorities are our priorities” was significantly less watched and commented on than the first, suggesting youngsters have had enough of No 10’s TikTok endeavours already.

Young people’s disaffection with the prime minister is repeatedly evidenced, and the largely negative and ridiculing response to the TikTok launch is further testimony of the lack of support Johnson has among younger generations.

A poll conducted in early 2022 following news that he had hosted a party during lockdown, showed that 91% of youngers believe Johnson should resign.

Even young people who support the Tory Party have voiced objection to the PM. Marcin Pisanski, a final year student at the University of Oxford told The Tab that while he is a Conservative voter, he feels passionately that Boris must resign.

“Boris Johnson became an antithesis of the values the Conservative Party used to traditionally stand for. His leadership turned the Tories into a party standing for nothing more than whatever he needed to make the country forget about the latest crisis he himself created,” he said.

Prior to the 2019 general election, Britain’s youngsters didn’t hold back in sharing their dislike of Boris Johnson. Citing abhorrence at the Brexit crisis and values that are ‘entirely opposed’ to their own, Johnson was labelled as the ‘last person young Britons would vote for.’

Johnson’s landslide victory in the 2019 general election had nothing to do with young people. A YouGov poll shows that age was a clear dividing line in the 2019 election, with an overwhelming majority of young people backing Jeremy Corbyn’s Labour. 38% of 18 – 24-year-olds backed Labour, 18% Lib Dems, 16% Conservative and 15% Green Party, the poll shows.

In the immediate aftermath of the landslide election, young people were quick to voice their discontent, promising to channel their anger into activism.

Over two years later, with repeated calls for a PM who is just about clinging onto office to resign, aversion towards Johnson among young people remains, as seen by the hounding he got on TikTok.