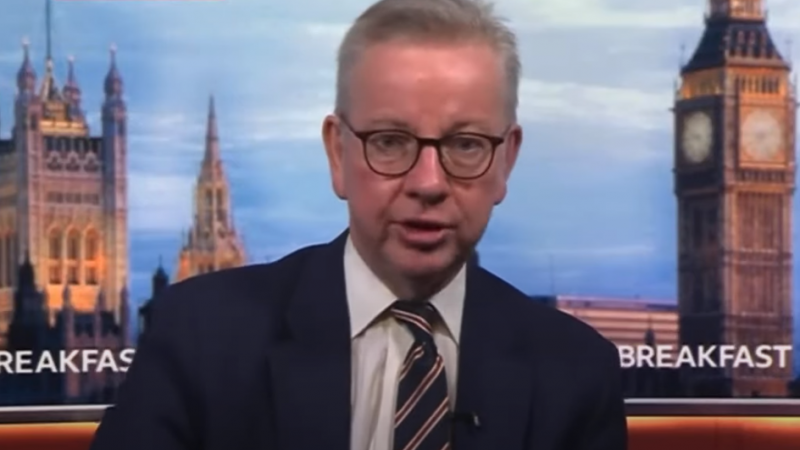 In yet another painful interview with a senior Tory, Michael Gove is being slammed for what has been described as a ‘bizarre’ interview on BBC Breakfast, in which he insisted there would be no emergency budget this summer.

Appearing to mock journalists, Gove attempted to put on a Liverpudlian accent to suggest that people “calm down” over the lack of financial support to help families that are struggling with the cost-of-living crisis.

The secretary for housing and levelling up also mimicked an American accent as he seemingly downplayed the seriousness of the questions he was asked.

Confusion about support to tackle the crisis

The interview follows confusion about the support being promised to people, with Johnson pledging more help would be revealed in the “days to come”, as the Treasury rules out additional short-term financial support.

Asked to explain the conflicting statements from No 10 and No 11 about the immediate solutions to the crisis, Gove embraced a sarcastic tone, saying:

“The prime minister was making the point we are constantly looking at ideas to relieve the pressure on people facing incredibly tough times – but that doesn’t amount to an emergency budget.

“It’s example of some commentators trying to take a statement that is commonsensical, turning it into – capital letters – a big news story, when the Treasury quite rightly say, ‘Calm down’,” Gove told BBC Breakfast.

Proceeding to vent his irritation at the Lib Dem leader, Gove said that Ed Davey had stirred the confusion into a “media whirlpool,” adding that Davey “doesn’t have a scooby.”

The strange interview was immediately leapt on, with commentators sharing their disgust at the sarcastic, flippant tone.

“Michael Gove doing his absolute best to confirm that he could not care less about the cost of living crisis, tweeted SNP MP Stephen Flynn.

Labour’s Lisa Nandy vented similar exasperation, tweeting: “What is he doing!? Making jokes and using silly voices while families across the country are struggling to survive.

“This isn’t a game (or an Oxford Union debate!). People are having to choose between heating and eating.

“Take it seriously. Do your job.”

“Is the cost of living crisis just a joke to them? This is not a serious government. We need an emergency budget right now,” Rayner tweeted.

The Scouse accent jibe didn’t go down well with the people of Liverpool.