TalkTV launched this week, with a heavy concentration on culture war issues from presenters like Piers Morgan. 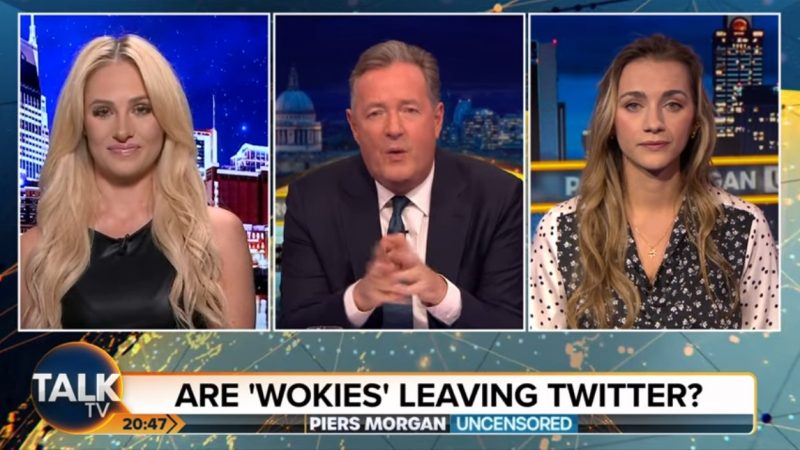 Rupert Murdoch’s new TV channel TalkTV launched this week, with presenters like Piers Morgan and Jeremy Kyle concentrating heavily on culture war issues, even as one of its other presenters insisted it was not a right wing channel.

Former Sun journalist Tom Newton Dunn, who presents one of the channel’s main news programmes, told Press Gazette that TalkTV was “not a right wing network”. The channel has announced that Scottish Labour leader Anas Sarwar and Tribune journalist Grace Blakeley will appear on different shows.

According to PressGazette, “Newton Dunn pledges to be “the straight guy” and present the news “in an utterly straight and unbiased way with zero political ideology”.”

Yet the channel heavily relies on a discourse of moral panic around identity politics, which has drawn comparisons to the other right wing news channel that has launched in the UK in the past year, GB News.

GB News’ chairman Alan McCormick said it was flattering that TalkTV was aiming to copy its style and tone: “If imitation is the sincerest form of flattery, though, we should feel sincerely flattered. Almost daily, I see examples of establishment broadcasters following GB News’ lead in their style, tone, and programming. Indeed, a whole new channel has come into existence because of us”, he said.

In their review of the TalkTV’s launch, Press Gazette voiced concerns that after a strong start (Piers Morgan’s first show had an average of 317,000 viewers, more than GB News’ first Andrew Neil show at 260,000 viewers), “the real test of the show will come when it settles into a more normal rhythm after the first two Trump interview special episodes. Will Piers find enough wokery to rage against every day?”

It seems unlikely that the channel will be able to regularly attract guests from the political Left or marginalised communities. Trans activist Felix Fern complained that after appearing on TalkTV’s predecessor TalkRadio in February, they still had not been paid, and that “being on their shows results in serious harassment and death threats” for people from marginalised groups.

The concentration by Piers Morgan and other presenters on attacking ‘woke culture’ and on culture war issues in general is an effective way of making viewers angry and engaged by suggesting that minority and other marginalised groups are trying to police language or cancel people for having un-PC views.

In the advert for Piers Morgan’s ‘Uncancelled’ programme, he is seen arguing with a producer who tries to temper Morgan’s language, saying “Sorry, Piers, some people don’t identify as people.” The effect of this kind of language is to suggest that trans people are just sensitive snowflakes without a genuine reason for their activism.

One of TalkTV’s panellists was also criticised by trans presenter India Willoughby, who tweeted a screenshot of a now deleted tweet in which Esther Krakue called her an “Angry bloke in a wig”. Krakue’s pinned tweet also says that “Nobody ACTUALLY thinks transwomen are women. We are just being respectful”, and her location is listed as ‘Terfistan’.

One of the ironies of TalkTV’s obsession with ‘cancel culture’ is that the channel is encouraging the very emotive and angry discourse which they also describe as ‘cancel culture’ when asked to give examples.

Piers Morgan called trans activists “trans Trojans” in the monologue on his show, suggesting that trans people were angry at women who “dare to say things like ‘women exist’”. This clearly misrepresents the concerns of trans activists, contrasting and pitting them against ‘women’.

What do the words ‘trans trojans’ imply? That trans people are like the horse used to destroy the city of Troy in Homer’s Iliad? Or are they like the Trojans themselves, whose city was destroyed? The precise meaning is unclear, but comes across as an insult.

A common aspect of the attitude of mainstream right wing journalists like Morgan is an inability to empathise or see things from the perspective of marginalised groups of people. It cannot be that trans people have legitimate reasons for being angry or fearful at their treatment by the state or media, they must be ‘trans Trojans’ seeking to undermine women’s rights.

The question remains for both GB News and TalkTV as to whether there is a big enough audience for this kind of anti-woke conservative culture war content for them both to succeed, or whether TalkTV will simply cannibalise GB News’ audience.

GB News’ presenter Nigel Farage certainly seems concerned about his new rival, apparently sending Donald Trump a dossier of negative things Piers Morgan had said about him in an effort to derail his interview with Piers Morgan. Farage has been having a Twitter spat with Morgan over his exclusive interview, saying that unlike Morgan, he had supported Trump since 2016.

If the GB News dream doesn’t last, however, Nigel can always fall back on his financial life coaching website, Fortune and Freedom, and has been recently posting videos about cryptocurrency investment. So good luck to Nigel in whatever future grift he chooses.