Thousands of people are coming together today, demanding the redistribution of wealth and power, decent wages for all, and justice for the sacked P&O workers. 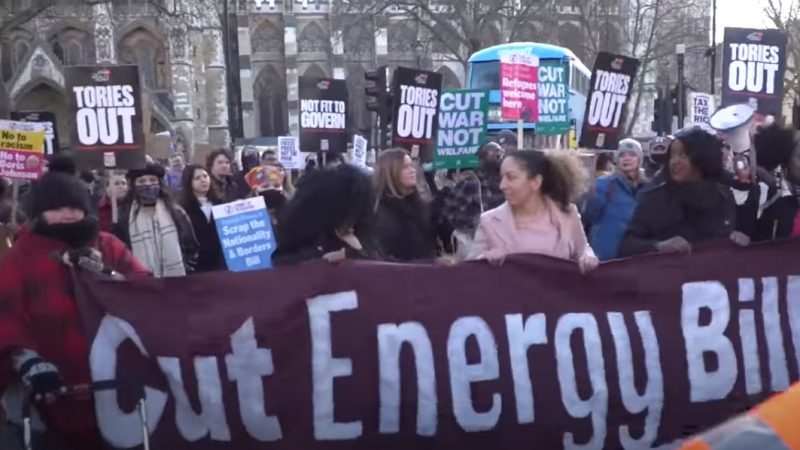 As Britain battles a cost-of-living crisis, with everything from energy bills to food skyrocketing, public outrage is mounting, with people are taking to the streets today to build a collective resistance.

Organised by the People’s Assembly Against Austerity, an organisation dedicated to ensuring the government faces a movement of opposition against cuts, austerity and privatisation, protests are taking place up and down the country under the banner ‘Cost of Living Crisis – We Can’t Pay.’

Today’s demonstrations are also in solidarity with the 800 P&O Ferries’ workers who were cruelly sacked for cheaper foreign labour last month.

People refuse to pay for the government’s crisis

A principal aim of the day of action is to send a clear message to the government that the people refuse to pay for their crisis.

The protests come just a day after the energy price gap was lifted by a staggering 54%, creating what has been described as an “impossible choice for many” – to heat or eat. A spokesperson for the People’s Assembly said: “Public outrage over the cost of living crisis is growing fast, and our response is gaining momentum.”

In London, protests are taking place outside Downing Street, where former Labour leader Jeremy Corbyn is speaking. Commenting on the impact of the escalating crisis, Corbyn said: “With rising fuel, food and energy bills, the soaring cost of living is pushing millions into poverty, and the disgusting treatment of the sacked P&O workers needs urgent action from the government.”

Laura Pidcock, national secretary of the People’s Assembly, who is speaking at the protest in Liverpool, said: “What people are experiencing is intolerable. No matter how patiently we explain that government inaction over soaring energy and fuel costs and sharply rising food prices is deepening poverty, misery and hunger, it is met with at best indifference and at worse more of the same.”

“The truth is they are so wedded to the economic system we have, comfortable with a hands-off approach, that even when markets are obviously failing us, they continue with business as usual.

“We tell them about children going hungry and the government shrug, politically speaking. Our anger and frustration with them must be directed and organised to build pressure on them,” Pidcock continued.

The demonstrations follow Rishi Sunak’s spring statement which has been slammed by unions for doing nothing to allay fears about soaring energy bills and rising inflation. The statement did very little to help the poorest of households with the support they need as energy and food prices soar and was noted for its “complete disregard for the hardship facing millions of households.”

Instead of tackling the cost of living crisis, the chancellor has left the average family around £1,000 worse off than last year, equating to the biggest fall in living standards since records began.

Today’s protests, which come the day after what has been dubbed as ‘Bleak Friday’ and new estimates from the End Fuel Poverty Coalition warn 2.5 million households with children are in fuel poverty after the new energy price cap rise, are demanding “immediate relief” from the government.