Defender of Western values Douglas Murray is back with a new book which has been promoted across the Murdoch media network. 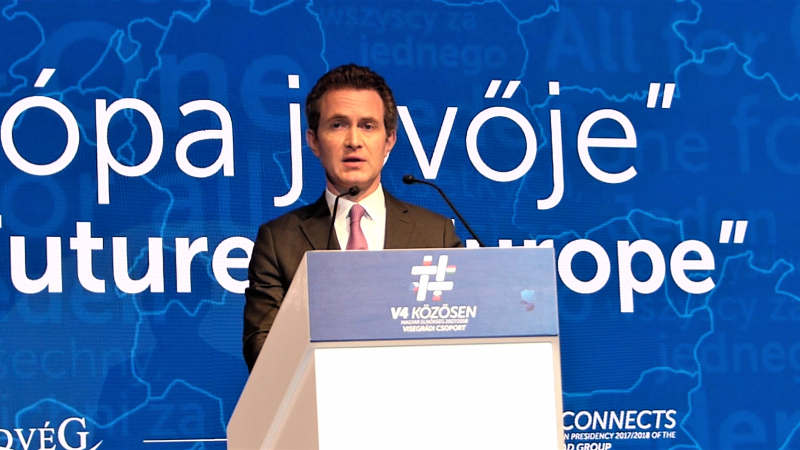 Douglas Murray, the associate editor of the Spectator, has a new book out, called The War on the West. The book is published by Harper Collins, a publishing house owned by Rupert Murdoch’s News Corp, and has been getting positive reviews from Murdoch owned publications like The Times.

For someone who is so critical of ‘identity politics’, Murray is very much concerned with Western identity, and particularly the part of it that concerns race. The Telegraph’s review of the book begins by saying “Don’t judge this book by its title. Douglas Murray’s introduction offers some remarks about the Western tradition and its achievements, but chapter one gets down to the real order of business: “Race”.”

Is The West synonymous with whiteness? Murray says “there’s only one permissible form of racism, and that permissible form is racism against white people about whom almost anything can be said”. It seems that to Murray, attacks on whiteness are attacks on the West in general.

Murray supports his claim that whiteness is under attack by reference to the way in which whiteness is discussed, rather than any material oppression. Indeed, Murray seems to be materially profiting from the promotion of this white victimhood narrative, somewhat undercutting the idea that white people are terribly oppressed.

Murray’s new book has been heavily promoted across Murdoch-owned media. He has been on Fox News, TalkTV, The Times, Sky News Australia, and has a regular column in the Sun. Few people have such a highly promoted public platform from which to complain about how under threat white people and ‘The West’ are. To me, it speaks of a lack of confidence in his own cultural attitudes. Have a bit more confidence, Dougie, I want to reassure him, the West is fine, it’s not going anywhere.

But of course it’s fashionable to catastrophise, to predict doom for your entire society, and has been so ever since Enoch Powell imagined ‘rivers of blood’ caused by immigration in 1968, and predicted that within 15 years, “the black man will have the whip hand over the white man”. This fear says much more about the insecurities of those voicing it than it does about Western societies generally.

For Murray, the reappraisal of colonialism is just masochism, the desire to look beyond the narratives about Western superiority is nothing more than self-flagellation. It’s a paranoid, distrustful mindset which refuses to engage with his opponents in good faith. We are being ‘disingenuous’ in our desire to understand colonialism, not in fact wanting justice, but simply ‘revenge’.

Murray told The Times that he was not so concerned with converting people to his views, saying “I suppose I was angry in part in my twenties because I thought there were things going on which I couldn’t believe people weren’t identifying. And now I have a certain peace with that.”

By talking largely to other white, male journalists, Murray is also spared the necessity of having to reflect on his own brand of white identity politics. For him, ‘identity politics’ is something that minority groups have, whereas he doesn’t even consider his identity to be an important factor in his political worldview – which it clearly is.

“I don’t walk around the day thinking of myself as a man or as white. To me these are boring and insignificant identifiers”, Murray told the WSJ podcast. This, I think, reveals a lack of awareness or curiosity about how power affects identity. One of the privileges of being white is not having to think about my identity, because my whiteness is almost never commented on, and I am never disadvantaged because of it.

Murray’s whiteness may be insignificant to him, but all too often the colour of someone’s skin is not insignificant, usually in negative ways. Reactionary attitudes like Murray’s white victimhood are a classic response from a member of a privileged elite to having his identity critiqued. Making whiteness an object of discourse feels like an attack on the very idea of whiteness itself.

Murray also has no good answer to the question of what ‘winning the culture wars’ would look like.

“A good outcome, he says, “would be for a country like Britain to have a reasonable attitude towards ourselves and our past. Neither sugar-coated nor acid-coated. It would be to be allowed to say and to celebrate things about ourselves that are good without being embarrassed about it.””

This is all very vague stuff. What are these things he wants to celebrate without being embarrassed? I’m not embarrassed about being British, and I agree that there are many things to celebrate in British culture and history. That’s why I’d like to see a government which would fund the arts and culture, rather than making it financially impossible for working class people to aspire to arts degrees.

There’s a debate to be had about how to promote British culture, history and the arts, but this isn’t a debate that Murray wants to have. His sense of identity is so fragile that it cannot handle critiques of British imperialism, yet he is blind to his own identity politics even as he rails against that of others.

I’ve always got the impression that when people like Murray talk about defending the West, they really mean defending the political status quo which benefits Western elites, but disenfranchises most ordinary people. When they say that the West is under attack, they mean that they are worried that people like them might have to give up some of their power.

Given that the political message contained in Murray’s writing is a defence of the status quo power relations in the West, it’s not that surprising that he is being so heavily promoted by Rupert Murdoch’s media network, which benefits heavily from this system.