The UK's response has been slammed as 'inhumane' 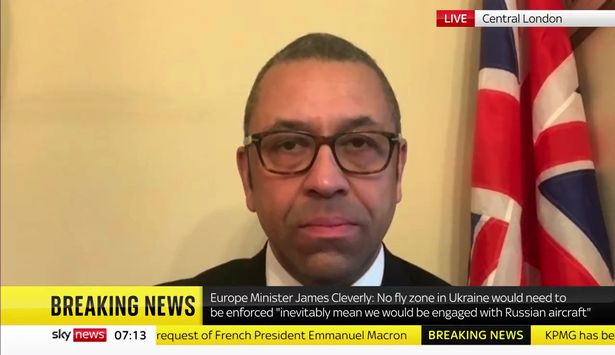 Tory minister James Cleverly has endured a humiliating round of interviews this morning, as he sought to defend why the UK has only offered visas for 50 Ukrainian refugees so far, while smaller countries elsewhere have accepted a far higher number.

Home Office sources have confirmed that around 50 visas had been granted under the Ukraine family scheme by 10am on Sunday, leading to disbelief and anger as well as criticism of Boris Johnson who had previously claimed that the UK ‘was way ahead’ on accepting refugees.

Only 1% of the 5,535 people who have applied since the government’s programme was launched to help refugees with family links in the UK have been accepted.

In stark contrast, Poland has accepted a million refugees at its borders, while Ireland has taken in 1,250 refugees.

Appearing on Sky News to defend what’s been slammed as the UK’s ‘inhumane record’, Cleverly insisted that the process had “only just started” after the UK faced criticism.

When confronted with a clip of a Brit and his family who had been turned back at Calais in a what turned out to be a disastrous interview on Sky News for Cleverly, he said that he did not know about individual cases but that ‘we will be supporting the refugees’.

Cleverly was unable to answer exactly why only 50 visas had been approved. Even some of his own Tory colleagues have been critical of the government’s response, with Tom Tughendhat telling LBC that the Home Office’s rate of awarding visas ‘certainly wasn’t a success’.

The revelation that only 50 visas have been approved has led to much criticism with Labour MP Bell Ribeiro-Addy tweeting: “1.5m+ people have been displaced by the Russian invasion of Ukraine so far.

“As of yesterday, the UK had approved only 50 visas. Pathetic.”

Adil Ray tweeted: “50!!! UK grants 50 Ukrainian refugee visas so far! 50! The application system is a huge barrier. This is an absolute insult.”