'Putin will suffer consequences enough, potentially costing his leadership. But for now, the priority must be ending the war as quickly and completely as possible.' 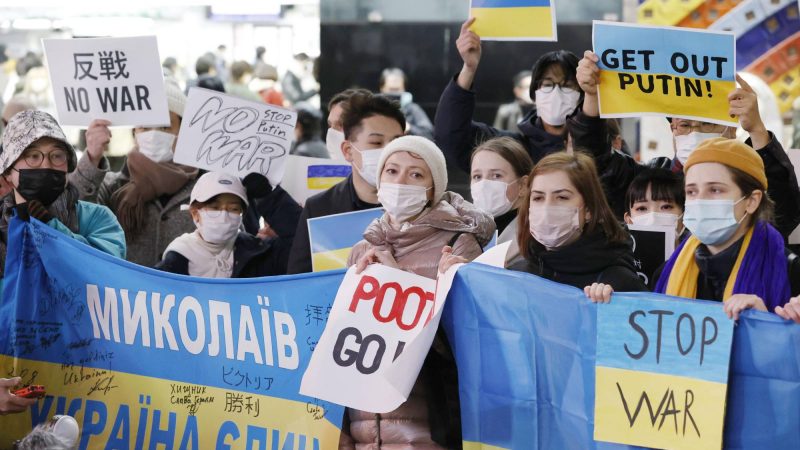 Three weeks into Russia’s invasion of Ukraine there is no sign of an end to the war or Putin’s willingness to continue unprovoked acts of aggression.

As the war continues, Russia’s willingness to resort to extreme measures is only increasing, as are its consequences. Recent days have seen an increase in air strikes on Ukrainian cities and repeated attacks on hospitals, including a children’s hospital in Mariupol.

The potential for the war to escalate further grows seemingly by the day. Western observers are concerned that Russia will resort to the use of chemical or even strategic nuclear weapons to achieve its goal of a complete takeover of Ukraine.

NATO and Western nations have made clear they will not join the war militarily, mindful of the huge risks involved in direct confrontation with Russia.

But the line between supporting Ukraine and entering the conflict is a narrow one. Putin views economic sanctions, which grow more stringent by the day, as an act of war.

It seems all but inevitable that, if fighting continues, Russian forces will eventually take Kyiv and overcome remaining resistance.

Yet Russian victory would not end the conflict. Putin “can’t capture and hold the whole of Ukraine, it’s a non-starter,” says BBC foreign correspondent Gabriel Gatehouse. Ukrainians would continue to resist even if Putin declared the war won.

Given the West’s refusal to enter the war the only way to end it is to reach a position where both sides have found an accommodation they can live with. “The reality,” says Gatehouse, is that “all conflicts end in some kind of negotiated solution. That eventually is going to happen.”

He believes that Russia may, even as its military tactics become more extreme, be positioning itself for a negotiated outcome, pointing to the fact that Dmitry Peskov, Putin’s spokesman, recently gave a list of demands for peace that were significantly less than Putin had been demanding before the invasion began.

Even militarily, Putin is not making moves expected were he aiming to occupy the whole of Ukraine. The Pentagon indicated this week that they see no movement of extra troops from Russia or Belarus towards Ukraine’s borders. “Perhaps [this] tells us the Russians are preparing to sue for peace,” says Gatehouse.

The big question is “whether the Ukrainians would accept any negotiated solution” that would satisfy even reduced ambition from Putin.

Putin has likely changed his calculation in light of events. He can no longer expect a pro-Russian government in Ukraine. The war has shown that even in Russian speaking parts of the country there is no support for Moscow that would make that possible.

“Putin insists Ukraine and Russia are the same country, the same people,” says journalist Vitaly Shevchenko, but “that’s not what Ukrainians think. Ukrainians have seen what Russian forces do to their cities. There’s very little love lost now.”

Putin indicated he accepts this when the Kremlin stated that it does not aim for regime change in Ukraine. The Kremlin stated at the same time that its demands were ‘neutrality’ as well as Ukraine formally giving up sovereignty of Donbas and Crimea.

The big question, says Gatehouse, is “whether the Ukrainians would accept any negotiated solution” that would satisfy Putin. “At a minimum he is likely to demand the sovereignty of Crimea and separatist regions.”

Ukraine may openly reject the idea of giving up Crimea and Donbas. Yet Zelensky must have known when he applied for Ukraine to be given EU candidate status that acceptance is impossible if Ukraine holds its claim to territories held by Russia.

Some observers believe this means Zelensky has made his choice; a path towards the EU for the majority of Ukraine at the expense of Crimea and Donbas.

The EU has not dismissed Zelensky’s application, which is supported by nine member states. EU leaders followed procedure by forwarding his application to the Commission. The only thing rejected by the EU Council was the idea of fast tracking the Ukrainian application, impossible to agree during the war.

It is unclear how Putin would react to Ukraine’s admission as an EU candidate country, but he should now recognise that Ukraine will face west to Brussels rather than east to Moscow; his brutal war has ensured that outcome.

Ukraine understands it does not have an open door to join NATO yet, said Zelensky:  “If we cannot enter through open doors we must cooperate with the associations with which we can, which will help us, protect us … and have separate guarantees.”

If granted EU candidate status Ukraine’s non-admission to NATO could be offset by an extension of the EU’s own security guarantee; Article 42.7 of the Lisbon Treaty would be applied to Ukraine as a candidate country.

Western observers may balk at the idea of an outcome which gives Putin any kind of victory. Yet the reality is that he already holds Crimea and Donbas. Ukraine does not have the power to remove him. The West refuses, for good reason, to do so. There is no available outcome which restores those territories to Kyiv’s control.

And in this outcome Putin does not escape. There is no return to the pre-war status quo. As part of any deal, sanctions may end formally but western companies may choose never to return. Russia will not be readmitted to the G7.

The EU is likely to retain sanctions against some Russian individuals and, scarred by the war, will follow through on its commitment to end dependence on Russian oil and gas. Given that almost two fifths of Russia’s federal budget comes from oil and gas exports to Europe this will mean a huge cost for Russia, and hence for Putin.

For now, this is conjecture. But Putin is running out of troops and out of time. One of Zelensky’s top aides said the war would be over by May or before as Russia had run out of fresh troops.

“We are at a fork in the road now,” Oleksiy Arestovich said. “I think that no later than in May, early May, we should have a peace agreement, maybe much earlier: we will see.”

Uncomfortable as it may seem, the best way to defeat Putin may be to allow him enough now to claim vindication in Moscow, while ending the conflict as swiftly as possible. Putin will suffer consequences enough, potentially costing his leadership. But for now, the priority must be ending the war as quickly and completely as possible.