As the government finally publishes the long-waited ‘levelling up’ white paper, the Manchester mayor blasts MPs for suggesting the city ‘should be grateful’ for scaled-back rail plans. 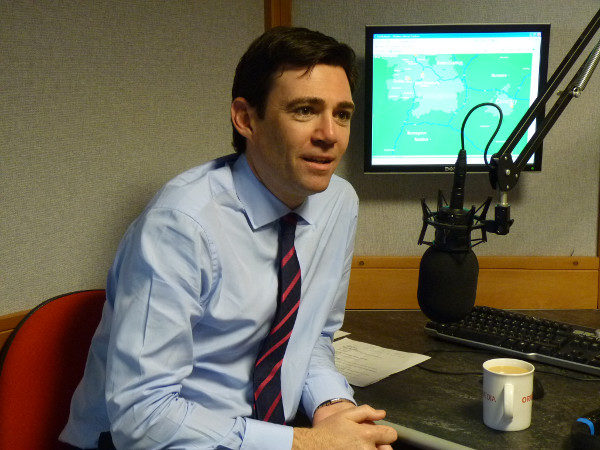 Andy Burnham has hit out at Conservative MPs over the U-turn of rail investment plans for the North and the suggestion that Manchester should “be grateful for what we are given.”

Following the mayor’s criticism of the scaled back integrated rail plan, Karl McCartney, Conservative MP for Lincoln, reportedly asked Burnham if he “understood the meaning of the phrase do not bite the hand that feeds you.”

‘Please sir, can I have some more?’

The MEN reports that Chris Loder, Tory MP for West Dorset, also chimed in, saying the amount was still “phenomenal” and that there were “other parts of the country that are lucky to get thousands.”

“Do you think that your strategy might be slightly schizophrenic? In private saying please, sir, can I have some more like Oliver, and then coming out in public and trying to beat the government up like The Incredible Hulk, do you think that’s delivering for you in the people of Manchester?” McCartney asked.

The Labour mayor responded angrily to the condescending remarks, stating:

“You are asserting that we should just be grateful for what we are given.

“But how about get what we were promised, because it’s actually your government that promised us all of that.”

In November 2021, the plug was pulled on the plans for HS2, which were meant to connect London with Birmingham, Manchester and Leeds city centres. Following transport secretary Grant Shapps’ confirmation that the eastern leg of HS2 has been scrapped and plans for the Northern Powerhouse Rail had been downgraded, the government was heavily criticised, accused of “selling perpetual sunlight” and delivering “moonlight for the people of the north.”

The Manchester mayor was among the critics of the move, hitting out that failing to deliver the rail plans in full would be a “severe blow.”

“If it is not a new line, it is not Northern Powerhouse Rail,” Burnham had told reporters at the time.

In response to the Tory MPs’ recent remarks on the foiled venture, Burnham continued that the rail plan was a “once in a 200-year decision”, warning that by getting second best now will mean the “North of England will have second best for 200 years or more.”

“If we accept second best again, it’s our great grandchildren and great, great grandchildren that have to continue to grow up in a North of England that has inferior transport connectivity, and a smaller economy than what it could otherwise have been,” Burnham added.

Maintaining their patronising tones, a Tory MP is said to have asserted that we won’t be talking about railways in 200 years’ time, while mockingly suggesting life will be analogous to the American cartoon, The Jetsons, with its flying cars and spaceships.

To which Andy Burnham coolly responded:

“We’re still using railways that were built 150 years ago.”