‘Mogg, early on the lookout for those myriad Brexit opportunities…’ 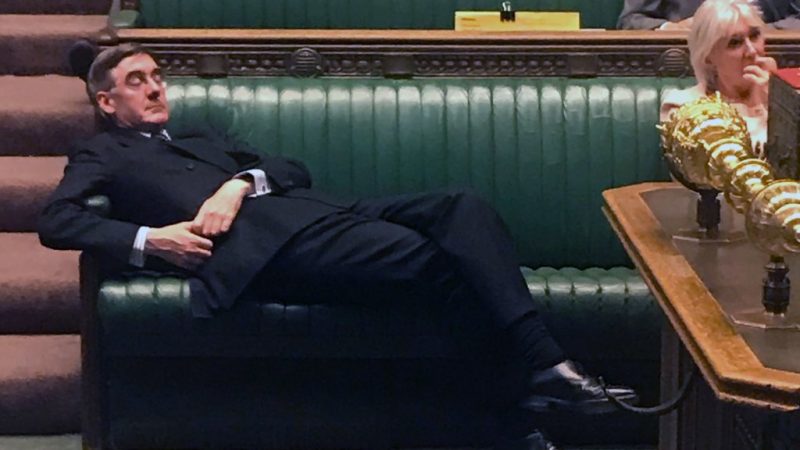 The most remarkable element of yesterday’s cabinet reshuffle was Jacob Rees-Mogg’s shift from leader of the House of Commons to the newly-created role of minister for Brexit opportunities.

The reshuffle comes as the prime minister faces growing pressure from opposition parties – and some within his own party – to quit. Following a spate of resignations, Johnson has promised to ensure there is more of a connection between backbenchers and the cabinet.

News that the Conservative MP for North East Somerset has moved to the cabinet office to the new role of Brexit opportunities minister – a job that includes “government efficiency” – has been the subject of abundant ridicule on social media.

Rees-Mogg was a prominent Leave campaigner during the 2016 EU referendum. The ardent Brexiteer and former chair of the European Research Group – a research support group of Eurosceptic Tory MPs – famously said it could take 50 years to reap the benefits of Brexit.

The comments were made in 2019, when Channel 4 News’ presenter Krishnan Guru-Murthy pressed the MP on whether he would quit if the “economy does take a hit next year” when Brexit happens.

“We won’t know the full economic consequences for a very long time,” said Rees-Mogg, adding: “The overwhelming opportunity for Brexit is over the next 50 years.”

The comments have come back to haunt the MP in the wake of his appointment as Brexit opportunities minister position – circulating as the butt of the joke.

“It may take 50 years to see the benefits of Jacob Rees-Mogg as Brexit Minister,” tweeted Henry Mance, writer for the Financial Times.

“Surrealism is tasking a man who said the benefits of Brexit wouldn’t be known for 50 years is to deliver them,” another posted.

Have I Got News For You jumped on the banter, tweeting:

“Jacob Rees-Mogg appointed ‘minister for Brexit opportunities’ on basis it won’t really add anything to his workload.”

Another, pointing to the infamous photo of the MP appearing to be snoozing in the House of Commons, wrote:

“Mogg, eagerly on the lookout for those myriad Brexit opportunities…”

The disclosure that a City firm the prominent Brexiteer had helped to found,  had established an investment fund in Ireland ahead of the UK leaving the European Union, has also been flagged up in the online mockery.

Rees-Mogg defended the move when he faced questions after it emerged that Somerset Capital Management (SCM) had launched a new investment vehicle in Dublin amid concerns about being cut off from European investors.

A prospectus for the new business listed Brexit as one of the risks, stating it could cause “great uncertainty.”

At the time, the disclosure was labelled as being “potentially embarrassing” for Rees-Mogg.

Though as we have seen time and time again, the current UK government seems immune to “embarrassment,” which could explain the audacity of appointing Jacob Rees-Mogg as Brexit opportunities minister.

The ardent Brexiteer’s implication with SCM were leapt on in the whirl of ridicule trending after the appointment was announced.

“This has to be a joke. This can’t be real. Jacob Rees-Mogg named Brexit opportunities minister. The very man who moved his business/investments to Ireland due to Brexit. No, this is actually incredibly comedic and terrifying,” Dr. Jennifer Cassidy tweeted.

The controversial appointment comes as reports emerge about how Brexit red tape has damaged Britain’s trade with the EU. Findings by the cross-party public accounts committee (PAC) found that Brexit is proving detrimental to trade between Britain and EU and warns the situation could worsen unless the government works with Brussels to reduce delays at UK ports.

He might cultivate the air of a pantomime toff, but in seeing Brexit as a way of avoiding EU regulations – as seen with the activities of his own investment vehicle, SCM – the appointment of the hardened Eurosceptic as Brexit opportunities minister, is perhaps more terrifying than comedic.