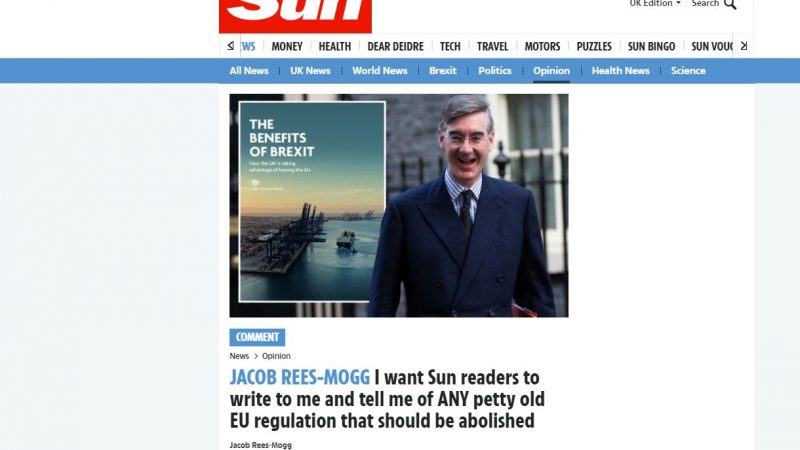 A week that has seen Jacob Rees-Mogg and his appointment to Brexit opportunities minister the subject of abundant online ridicule, has concluded with the MP appealing to readers of The Sun to write to him with ANY EU regulation they think should be abolished.

In the opinion column published in the tabloid newspaper on February 11, Rees-Mogg spoke of the “immense” opportunities ahead.

Referencing Boris Johnson’s comments when he sealed the Brexit deal in December 2020, that “we have taken back control laws and our destiny,” the prominent Brexiteer said “huge parts of our economy are no longer regulated by the EU.”

The North East Somerset MP said – pre-Brexit – his constituents would write to complaining how EU regulations would burden them daily.

“From farmers to electricians, on so many issues I had to tell them that even as an MP I could not help to solve their problems, as these rules were set by the EU, not the British Parliament.

“Thanks to Brexit, that has all changed. Sun readers can hold their MPs accountable, as the buck truly stops with them.

“You are the ones who know the red tape binds your hands, and to do my job I need your wisdom,” the column continued.

Quoting right-wing US president Ronald Reagan that the “nine most terrifying words in the English language are, ‘I’m from the government, and I’m here to help,” Rees-Mogg said such approach needs to be ‘turned on its head.’

“I implore you all to write to me with the regulations you want abolished — those which make life harder for small businesses, which shut out competition, or simply increase the cost of operating. Through thousands of small changes, we can enact real economic change — which means The Sun’s readers will feel a real Brexit bonus in their pockets and in their lives every day,” reads the patronising article.

As the hardened Brexiteer cites Ronald Reagan’s quote on the most ‘terrifying’ words in the English language, Rees-Mogg has himself been implicated with the word ‘terrifying’ this week.

For an MP who famously said it would take 50 years for Brexit benefits to show, Rees-Mogg’s transition from leader of the House of Commons to Brexit opportunities minister in Johnson’s cabinet reshuffle earlier in the week was roundly mocked on social media, branded both “comedic and terrifying.”

It seems the pro-Brexit tabloids are desperately attempting to cite Brexit benefits, as Rees-Mogg’s column came the day after the Express published a ‘Brexit win!’ article.

A hideously anti-EU-riddled article in the Express focuses on how, Brexit has ended “the unfair process of allowing EU nationals free university tuition fees in Scotland but not students from England, Wales or Northern Ireland.”

If course there was no mention of the challenges Brexit presents for universities, including the number of European Union students at UK universities forecast to slump by more than half, resulting in Britain’s education institutions expected to lose an estimated £62.5 million a year in tuition fees as a result of Brexit.