The activists say the sale of the site is a direct result of their sustained campaigning. 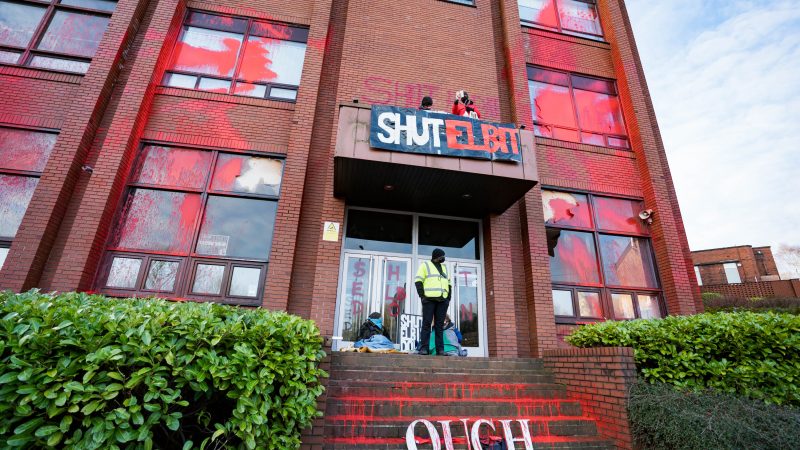 Palestine Action – the campaign network that demands an end to UK complicity with Israeli apartheid – is celebrating a campaign which, according to the group, resulted in the forced closure of an Israeli UK weapons plant.

The activists say its sustained 18-month campaign is the reason of the sale of the Elbit Ferranti factory in Oldham, Greater Manchester.

According to Campaign Against Arms Trade (CAAT), Elbit describes its drones as “the backbone of Israel’s drone fleet and they were extensively used by the Israeli military in the 2014 attack on Gaza.”

Elbit announces sale of the factory

The factory in Oldham is one of ten owned by Elbit in Britain. On January 10, Elbit Systems announced it had sold the Ferranti Technologies site to the British electronic firm TT Electronics for £9 million.

Elbit says the sale of the Oldham site is part of a restructuring strategy in the UK. In a statement about the sale, an Elbit Systems UK spokesperson said: The integration of most of the activities of Ferranti Technologies into our Aerospace and Simulation Business Unit and the sale of a separate part of Ferranti Technologies activity is part of the continued implementation of our UK growth strategy.

“Following a series of successful contract awards from the UK MOD, Elbit Systems UK is well established in the UK, and will continue to provide cutting-edge solutions, manufactured in the UK, to meet the needs of the British Armed Forces.”

The pro-Palestine activists say its sustained protests over the last 18 months is the real reason behind the sale.

The prolonged action involved the occupying of the entrance to the factory, the smashing of windows, activists chaining themselves to the premises, the spraying of blood red paint on the factory walls, and more – action that led to multiple arrests. The group says its repeated occupation of the site has cost Elbit “millions” and forced the “factory closure.”

Since the bombing of Gaza by Israel in May 2021, the Oldham premises has also been the target of other campaign groups, with regular protests being held there by Oldham Peace and Justice and Manchester Palestine Action.

According to Palestine Action, sustained pressure, through protests and an extended campaign of effective direct action, has “generated immense challenges for Elbit, who have now sold the subsidiary and left the site.”

The action group claims that in November 2021, anonymous sources told them staff working at the factory had been issued with mass redundancies and that the site was being cleared in preparation of Elbit leaving.

“The closure of the factory in Oldham means very clearly that direct action is working. Combined with the intensive community organising efforts by local groups, we’ve got Elbit where it hurts – their profits – and forced them to shut down the factory.

“After an incredible effort by dozens of activists, enough disruption and damage was caused to make Elbit reconsider their operations in Oldham – a strategy we’ll keep using until Elbit’s remaining 9 sites in Britain are shut and Elbit are forced out of the country.”