The UK’s leading antifascism campaign group, Hope not Hate, is fundraising to pay for the cost of an independent insolvency expert to look into Robinson’s finances and hidden assets. 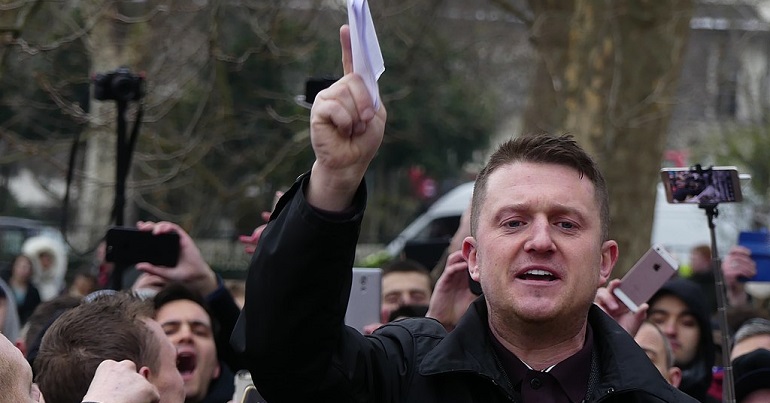 An investigation has been launched into Tommy Robinson’s assets and ‘hidden millions’, after the former leader of the far-right English Defence League claimed he was bankrupt after being ordered by a judge to pay damages.

The UK’s leading antifascism campaign group, Hope not Hate, is fundraising to pay for the cost of an independent insolvency expert to look into Robinson’s finances and hidden assets.

Creditors are attempting to recover over £2m in debts owed to them by the far right extremist Stephen Yaxley-Lennon (better known as Tommy Robinson).

On 3rd March 2021, Robinson declared himself bankrupt and unable to pay his debts. He went on to lose a libel case brought against him by Jamal Hijazi, a young Syrian refugee who Robinson publicly smeared in 2018, wrongly portraying him as a violent thug. Although a High Court judge ordered Robinson to pay Jamal £100,000 in damages and his legal costs, he has not seen a penny.

HOPE not hate now has reason to believe that Tommy Robinson has access to assets worth up to an estimated £3m, gained through property acquisitions, company investments, donations and book sales, and will shortly be supplying a dossier of evidence to the new investigation.

An independent investigator would have a number of powers at their disposal including accessing Robinson’s bank and company records, interviewing witnesses under oath and – if necessary – applying to court for search and arrest warrants.

HOPE not hate is now fundraising to raise the costs of the new investigation to expose Tommy Robinson’s hidden millions so that he is forced to pay his creditors what they are owed.

Nick Lowles, CEO of HOPE not hate, the UK’s leading antifascism campaign group, said: “Jamal Hijazi is a victim of Tommy Robinson’s vitriol, and it is important that Robinson is held to account. We cannot stand aside and let this hateful far right extremist defraud an innocent victim out of a life-changing sum of money and walk away free to continue to spread his vile ideology with the help of the millions of pounds he claims not to have. It is wholly unjust that while his victim’s life has been turned upside down, Tommy Robinson carries on his life as before.”

“HOPE not hate is putting together a detailed dossier which will assist with revealing the truth as to how and where Tommy Robinson has hidden his assets. To help us ensure that the new investigation has the resources it needs to conduct its work properly and has the means to begin asset recovery, we are asking people to donate to our fundraising campaign.

“Tommy Robinson has to understand that there are real consequences to his hate. It is time to make him pay up and ensure that his victims get proper justice.”

To donate to the fundraiser by HOPE not hate, click here.