'Over the years, the Conservative and New Labour governments have chipped away at the NHS by privatising some of its services, such as physiotherapy and blood-testing'. 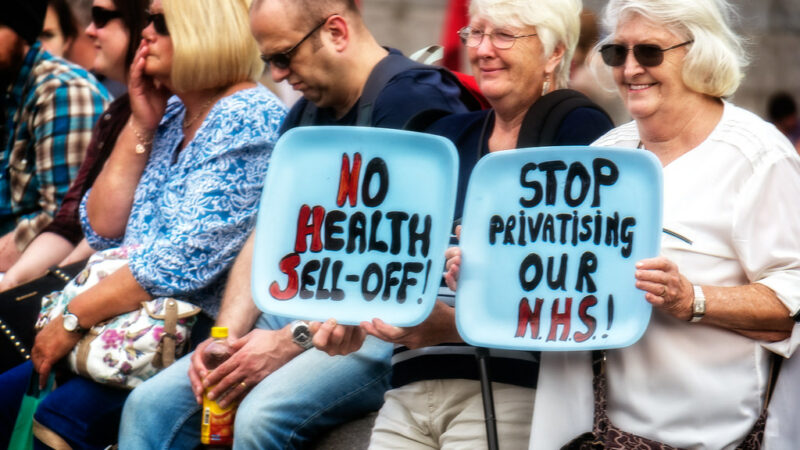 Over the years, the Conservative and New Labour governments have chipped away at the NHS by privatising some of its services, such as physiotherapy and blood-testing. Many staff had to reapply for their jobs on inferior terms. The 256 page Health and Care Bill, currently going through the House of Lords and already passed by the House of Commons, makes it easier for profit-seeking corporations to secure further NHS and care work.

The Bill comes at a time when due to lack of investment, the NHS is in a dire state. In 2010, when the Conservatives came to office, the waiting list for hospitals in England was around 2.5 million.  By the end of 2019 the waiting list grew to nearly 4.5 million and is now nearly 6 million. There is a shortage of nearly 84,000 full time equivalent staff, including 37,000 nurses. Face-to-face appointments with family doctors are becoming rare and the Bill does not guarantee access to a family doctor.

The Bill removes the need for endless competitive tendering for NHS services, but corporate representatives on the Boards will make decisions about procurement. Entire Hospitals can be handed over to corporations. There will be conflict of interests and there is little in the Bill about public accountability. So the likes of Virgin Healthcare, which has paid virtually no corporation tax on its healthcare deals, would have seats on the ICBs. Private equity firms who have long profiteered from care homes and dodged taxes would have a seat on the ICBs. Such interests would facilitate further privatisation.

Previous privatisations have drained the NHS resources. A typical cataract operation is 50%-100% more costly in the private sector than the NHS. Knee and hip replacements can cost two to three times more in the private sector. In 2012 Hinchingbrooke Hospital in Cambridgeshire was privatised on a 10 year contract, but in 2015 was brought back to the NHS as its corporate owners could not make high profits and provide acceptable levels of patient care.

Up to 11% of the NHS budget is already handed to the private sector. Around 25% of the resources vanish in dividends and concocted costs relating to rents, lease payments, management fees, royalties and other charges, often to offshore affiliates. This leaves little for frontline services and waiting lists grow. Undeterred, the Bill facilitates more of the same. In the event of a corporate collapse, local authorities and the NHS would need to take over the services and this inevitably creates moral hazards.

The government claims that the Bill will facilitate integration of the health and care system though there is little detail. Let us look at some practical issues. The clinical services are controlled by the NHS and social care is under the control of local authorities. Access to social care is means-tested and local authorities cannot overspend. Access to clinical services is universal and is not means-tested. Overspends are permitted. So how are these two budgets to be integrated?

The task of integration could be eased by putting social care on the same basis as the NHS, but the Bill does not do that. An integrated budget is a code for a fixed budget. So what will happen when the budget is spent? People will be denied clinical services. Under the strain of pain and worry, many will go private and thus achieve the government’s aim of more privatisation. Integration of dissimilar services creates fuzziness at the boundaries. There is nothing to prevent the boards from reclassifying some services as ‘care’ and thus forcing patients to either pay more or wait.

The Bill hands new powers to the Health Secretary over almost all NHS functions.  They will be able to retake decisions already made by NHS leaders and direct them to consider new service changes. Contracts could be awarded to third-parties, hospitals and sub-units could be closed. None of these powers are subject to any parliamentary scrutiny. The response to the coronavirus pandemic is hardly an advert for closer Ministerial involvement in the running the health system. Ministers awarded Covid-related contracts to cronies, without adequate public accountability. The same will become common practice.

The privatisation of healthcare is a bonanza for corporations, but a threat to universal healthcare. People need to fight for their NHS or lose it.