"You know being Secretary of State for Culture, Media & Sport doesn’t mean you’re the boss of journalism right.” 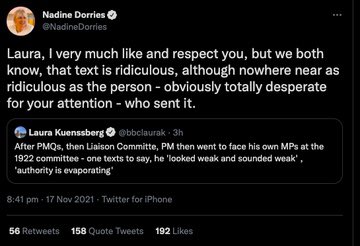 The culture secretary Nadine Dorries has deleted a tweet after receiving a backlash to what her critics say was an attempt to police the BBC’s output.

Dorries, who has been a vocal critic of the BBC, took issue with an anonymous Tory MP telling Laura Kuenssberg, the BBC’s political editor, that the “prime minister’s authority is evaporating” during a gathering of the party’s 1922 Committee of back benchers. The prime minister was meeting with the MPs as he sought to deal with growing Tory disquiet over the way he handled the Owen Paterson lobbying scandal.

In reply to Kuenssberg’s tweet, Dorries quoted her and said: “Laura, I very much like and respect you, but we both know, that text is ridiculous.

“Although nowhere near as ridiculous as the person – obviously totally desperate for your attention – who sent it”.

Dorries later deleted the tweet, but not before a backlash, with critics accusing her of trying to police the Corporation’s output.

Associate editor of the Daily Mirror Kevin Maguire tweeted: “Bullying the BBC and @bbclaurak for fair reporting? Culture Secretary @NadineDorries deleted this Tweet but must be held accountable for it.”

Karl Turner MP tweeted: “Sec of State for Digital, Culture, Media and Sport publically tells off @bbclaurak for having the audacity to report Johnson’s terrible state today and then quickly deletes the tweet. What you say, Laura? Anybody got a screen shot?”