Pledges to address England’s regional inequality transpires into broken promises with the scaling back of Northern Powerhouse Rail. Naturally, northerners are in uproar. 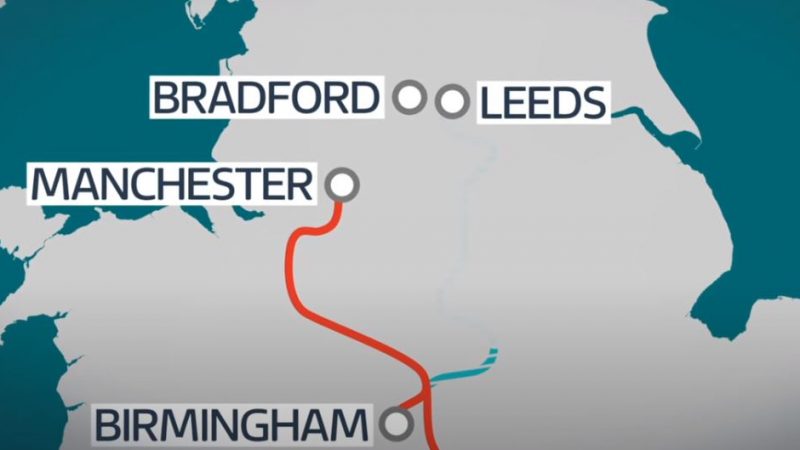 In a crushing blow to long-awaited plans to curtail economic, cultural, and social disparities between the north and the south, the HS2 rail plan has been derailed.

Resentment is bubbling in the north following confirmation this week that the eastern journey of HS2 to Leeds and a full high-speed line linking Leeds to Manchester has been abandoned.

The Integrated Rail Plan, published on November 18, revealed that the high-speed rail network to Manchester will still go ahead but will the Northern Powerhouse Rail (NPR) project will be scaled back. Instead of running from Birmingham to Leeds, as promised, the route will stop at an existing station in the West Midlands.

The news has sparked an outraged backlash from many in the north, labelled as a “great northern rail betrayal.”

As ministers insist the downgrading of the £96bn railway proposals across northern England will create money-saving changes that will see faster commutes earlier than planned, regional leaders and industry figures contend the announcement is a betrayal to the north.

Richard Burgon, Labour MP for Leeds East, believes the scrapping of the plans demonstrates a lack of respect among Tories for the people of the north. Sharing his derision over the announcement, Burgon tweeted:

“Today with their decisions on high speed rail we’ve again seen the Tories treat people in Leeds and our region with contempt.

“We were promised levelling up – instead people have been let down again.

“Tory talk of “Northern Powerhouse” and “levelling up” is a Conservative con job.”

Resentment to the scrapping of plans designed to balance England’s southern-centric economy isn’t confined to the opposition.

It seems to be finally dawning on many senior Tories that Johnson’s pet ‘levelling up’ project is decidedly off-track, with Conservative MPs voicing disapproval over the announcement, particularly in the north.

Martyn Cox, Conservative leader of Bolton council, signed a letter to Boris Johnson, stating how the scaling back of the NPR was “contrary to your ambition to ‘level up’ the north” and “runs the risk of holding back out regional economies and compromising our plans to cut carbon emissions.”

The letter was organised by Tracy Brabin, the Labour mayor of West Yorkshire. Brabin is a vocal critic of the government’s broken ‘levelling up’ promises.

In response to a speech Boris Johnson made on levelling up, Brabin said: “The people of West Yorkshire were looking forward to hearing the Prime Minister lay out his strategy to back up the often-uttered phrase ‘levelling up.’

“Sadly, what we got today was a speech empty on detail. We’ve had so much rhetoric from government over the past years.”

On the scrapping of HS2 plans, the mayor said that it would affect the north’s “potential, investment and opportunity and it’s just not good enough.”

Keighley is not far from Bradford, which is one of the worse connected cities in Britain.

“The Bradford district has been in my view completely short-changed. We are one of the most socially deprived parts of the UK and we must get better transport connectivity and I still want to see Northern Powerhouse Rail delivered with a main stop in Bradford, so that we can unlock our economic opportunities,” said Moore.

Unions have expressed their disproval over the changes to railway plans, with Unite branding to the decision as “industrial vandalism.”

Jerry Swain, Unite’s national officer for construction, said the move had put national infrastructure planning back by a generation.”

“The government is demonstrating that it is simply not serious about its levelling-up agenda and that its manifesto commitment to improving regional connectivity was nothing but hot air,” said Swain.

The ‘northern powerhouse’ slogan was coined by the former chancellor George Osborne in 2014.

The phrase may have stood the test of time, being regularly bandied around by Boris Johnson, but the catchy catchphrase has, for most part, remained nothing but a slogan, an attempt to bolster Tory support in traditionally Labour-supporting communities in the north.

Since the start of his premiership almost two years ago, Johnson and transport secretary Grant Shapps, have repeatedly backed commitments to deliver HS2 in full, alongside the Northern Powerhouse Rail (NPR).

Shortly after becoming PM, Johnson pledged to specifically fund the Leeds to Manchester route. In 2019, he insisted there was a “very good case” for the £39hn investment in NPR, as Shapps said the government was to invest “£23 billion to deliver Northern Powerhouse rail and the TransPennine route upgrade” combined.

The prime minister went onto make several commitments to building the eastern leg of HS2. As recently as February this year, Johnson told MPs of his intention to build it.

Former transport secretary, Chris Grayling even made a “personal commitment” that Bradford would benefit from the NPR.

Such pledges, as confirmed by this week’s news, have been broken.

“This is what you get with a liar as Prime Minister.”

Gabrielle Pickard-Whitehead is a freelance journalist in contributing editor to Left Foot Forward.