Protestors gathered in central London over the weekend, demanding the release of the WikiLeaks’ founder. 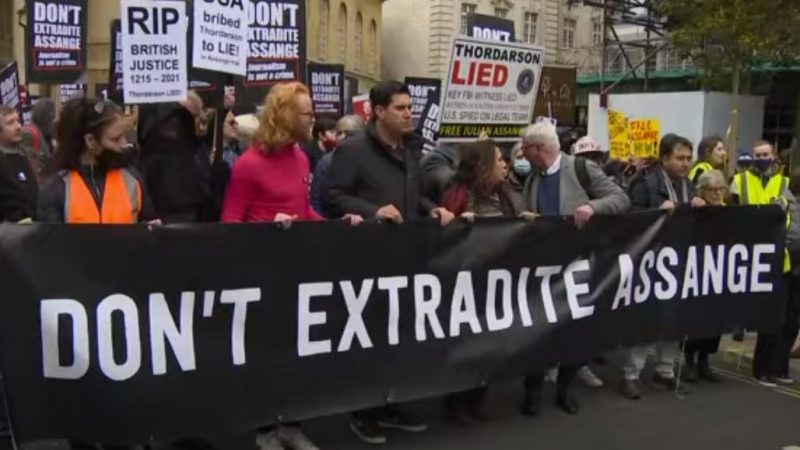 Hundreds of Julian Assange supporters marched to London’s High Court on Saturday ahead of the journalist’s appeal to his extradition case taking place this week. The US appeal will challenge the British court decision that blocked the WikiLeaks publisher’s extradition.

Assembling at the High Court, speakers told the gathering that the decision on Assange’s future will be hugely important and symbolic for press freedom.

Labour MP and former shadow chancellor John McDonnell was among the speakers. McDonnell is also the Secretary of the National Union of Journalists parliamentary group, which works with the trade union for journalists, in promoting its campaigns and policy, and in scrutiny of legislation that affects members.

A ‘chilling effect on media freedom’

In February 2020, McDonnell had visited Julian Assange in Belmarsh Prison, where the WikiLeaks’ founder had – at the time – been detained for more than ten months. During McDonnell’s meeting with Assange, Dunja Mijatovic, European Commissioner for Human Rights, demanded the journalist’s extradition to be blocked, warning it would have “a chilling effect on media freedom.”

Speaking to the rally this weekend, John McDonnell explained why he visited Assange in prison, stating:

“What I found in Julian was someone standing up courageously to all the attempts to silence him and oppress him. And the reason he is standing up so courageously and valiantly is because he knew that there are people like you supporting him throughout this campaign.

McDonnell continued to speak about Assange’s plight representing more than an individual case, but the right to freedom of expression and the right of freedom of the press.

“It isn’t just about the individual. This is about a basic human right that we thought we had established centuries ago. It’s the right of freedom of expression. The rights of journalists to speak truth to power.

“What we are seeing is the oppression of a journalist and a whistle-blower. This is about their rights and someone to be able to report and speak the truth,” McDonnell added.

Julian Assange founded WikiLeaks in 2006. In 2010, following leaks provided by the US Army Intelligence analyst Chelsea Manning that include the Baghdad airstrike Collateral Murder video, the Afghanistan war logs, the Iraq war logs, and Cablegate, the US government launched a criminal investigation into WikiLeaks.

Assange, the founder of the classified media and news leaks site, was charged with counts of espionage for publishing classified documents. If extradited and convicted in the United States, the Australian journalist, editor, publisher, and activist faces a potential prison sentence of up to 175 years.

A ‘positive step for Assange but a blow to press freedom’

In January 2021, a London court decided not to extradite Assange to the US to face criminal prosecution, citing he would be at risk of suicide. However, Judge Vanessa Baraister failed to outrightly reject the Justice Department’s case against Assange, which advocates of press freedom say criminalises some newsgathering practices.

Baraister’s decision was described as a “positive step for Julian Assange but a blow to press freedom.”

On October 22, 2021, the Belmarsh Tribunal: Free Julian Assange event was held at the Convocation Hall in Westminster. Leading figures from politics, law and journalism gathered to speak against existing crimes, both in the UK and the US, against the WikiLeaks founder. The meeting sought to hold the US accountable to its alleged war crimes.

Speaking at the event, Labour MP Richard Burgon said: “Julian Assange is being persecuted for, in the best traditions of journalism, revealing war crimes and human rights abuses carried out in our name, including in Iraq and Guantanamo Bay.

“Julian Assange is being treated in the most inhumane and appalling way in an attempt to intimidate journalists and whistle-blowers from revealing the truth and holding the powerful to account.

“Everyone, regardless of their politics, who believes in free journalism should oppose his imprisonment and extradition,” Burgon added.