Labour left are rallying support to MP caught up in an investigation threat issued by the party. 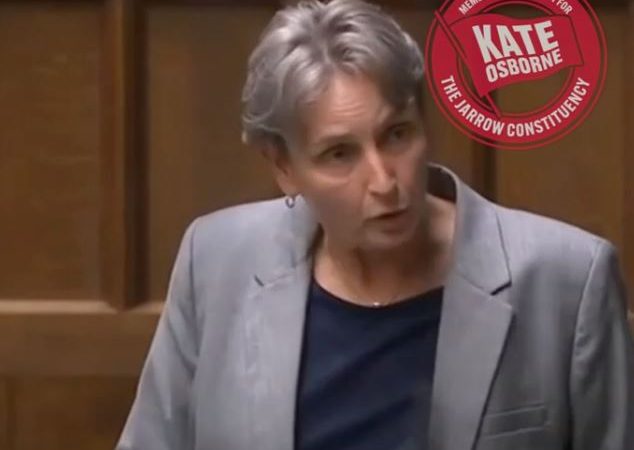 Messages of support and solidarity from the left-wing faction of the Labour party are being showered at Kate Osborne, after the MP for Jarrow was issued with an investigation warning for allegedly breaching party rules.

On Friday September 17, the MP – who is positioned on the left of the Labour Party and is a member of the Socialist Campaign Group of MPs – revealed that she was issued with a notice of investigation by the party.

Osborne swiftly responded with a lawyer’s letter, and, within an hour, Labour retracted the investigation and issued an apology for the ‘administrative error.’

A spokesperson for Labour said:

“This should not have happened. We have rescinded our notice and apologised to Kate.”

The incident follows a similar case just days earlier, when Labour apologised for briefly placing the chair of its youth wing, Jess Barnard, under investigation for alleged “hostile or prejudiced” behaviour.

Like the case involving Kate Osborne, Labour said the investigation letter to Barnard was an administrative error that occurred amid an attempt to clear a backlog of complaints.

The concurrent incidents have fuelled suspicion and contempt among many, particularly those on the left of the party, that they may be an attempt by Labour leadership to demonise the party’s left-wing figures.

In response to Osborne’s plight, Richard Burgon, Labour MP for Leeds East, and secretary of the Socialist Campaign Group of Labour MPs, tweeted:

There is a disturbing pattern.

How many more, less well known, left members is this happening to.

Another supporter of the left-wing MP showed his support, tweeting:

“Solidarity, always, Kate! But I ask you to please show solidarity with the hundreds/thousands of ordinary members who have been through the same as you. Except they don’t have an MPs profile, nor can they afford lawyers.”

Alongside the contempt of Labour’s ‘errors’, and support to those of the receiving end, speculation is surfacing over why the party may be targeting certain figures.

Alex Nunns, who worked as Jeremy Corbyn’s speechwriter from 2018-20, alluded to a tweet Osborne had posted that stated solidarity to ‘comrade’ Rebecca Long Bailey, as the reason why she was put under investigation.

Provoking widespread anger among much of the Labour rank was recent high-profile dismissals of left-wing members and activists, including what was branded as the “scandalous expulsion” of left-wing film director Ken Loach.

Calls are being made for what has been referred to as “marginalising the left through bureaucratic stitch-ups” to be a key focus of this year’s Labour Party Conference.

“@UKLabour @Keir_Starmer this has to stop.

I raised the @JessicaBarnard situation on Tuesday and I was assured that this would not happen again.

Putting Kate and others through this is distressing for them. We have a conference in a week’s time that should be the focus.”

In a public statement made by Kate Osborne that was sent to LFF, the MP said:

“I have decided to speak out because if they come after elected MPs with baseless claims they will come after others. We need a serious close look at ourselves and what is happening to our party.”