The technology is new, and expensive, but may help offset unavoidable carbon emissions from steel and cement production. 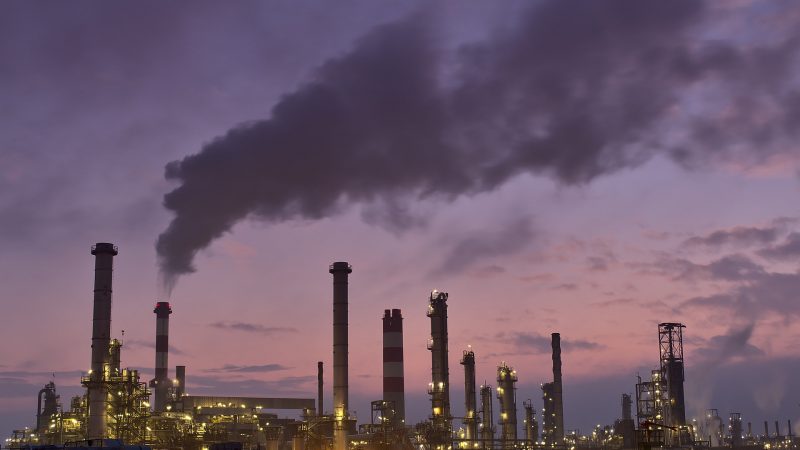 The world’s biggest direct carbon capture facility has opened in Iceland, promising to take 4000 tonnes of carbon dioxide out of the atmosphere each year.

After proving the viability of the technology this week, Climeworks, the Swiss start-up behind the facility, have plans to open a much larger facility in the next few years.

The UK government has pledged to go down a similar route, with plans to open four carbon storage plants in the next ten years.

But with Climework’s Orca facility charging €1000 per tonne of carbon stored, questions have been raised about the cost and the usefulness of such projects.

CCUS stands for carbon capture, usage and storage and is the process where carbon dioxide is stored underground or used elsewhere, instead being emitted into the atmosphere.

There are a few different ways this can be done.

One way is to capture the CO₂ in the factory or power station where it’s produced as a by-product and process it there.

Fuels such as coal are burned, producing “flue gas” which contains a range of chemicals including carbon dioxide.

The flue gas is fed into equipment known as an absorption column or tower. There, the CO₂ attaches to a specially made solvent, separating it from the flue gas which is then released.

Another way is to capture the carbon from fuels before they are combusted, by turning the fuel into a gas before burning it and extracting the CO₂ with solvents.

Carbon dioxide can also be captured from the atmosphere – although this is harder because of the low density of CO₂ in the air.

After the CO₂ has been extracted there is then the problem of what to do with it. Some can be used in carbonated drinks and to make materials, but the vast majority has to be stored.

The extracted CO₂ can be injected into rock formations deep in the Earth’s crust – often in spent oil and gas fields – where it will remain locked away and out of the atmosphere, potentially for tens of thousands of years.

Has the UK tried it before?

The government has made a few attempts at carbon capture projects in the past, but none of them made it to completion.

In 2009, the government held a contest which pledged £1 billion to develop the UK’s first commercial scale carbon capture project.

It was narrowed down to just one competitor, ScottishPower, which successfully demonstrated a project that captured over 90% of CO₂ emissions.

But in 2011, the government pulled the funding and the power station it was planned for was earmarked for demolition.

Another attempt was begun a few years later, but the project was again cut short by the government in 2015.

What are the UK doing now?

In November last year, Boris Johnson announced that the government would invest in carbon capture, usage and storage as part of his 10 Point Plan to make the UK a leader in green technologies and help the path to net zero.

They pledged £1 billion for a CCUS Infrastructure Fund.

The government hopes to build two CCUS schemes by the mid-2020s and two more by 2030. They hope to capture more than 10 million tonnes of CO₂ a year.

In July it was announced that five companies who had submitted plans all had passed initial tests. Ministers are expected to choose two projects in October.

What could it mean for net zero?

Critics of carbon capture say that the technology is expensive and it is not possible to be rolled out on a meaningful scale.

But similar concerns were raised in the early days of wind and solar power, both of which have been overcome with time and investment.

The UKCCS Research Centre is optimistic about the future of carbon capture and the role it can play in helping the UK reach net zero.

They say that the technology is proven, is safe and could open up new markets for the UK.

The group also says that it is the only way to decarbonise certain industries, such as steel, cement, refining chemicals, glass and ceramics all emit CO₂ as part of a chemical process required in production.

It also seems like there will be no choice but to pursue CCUS if the UK is to reach net-zero by 2050.

UK net-zero scenarios involve aggregate annual capture and storage of 75-175 metric tonnes of CO₂ in 2050, which would require a major carbon capture infrastructure.

The CCC estimates it would require CO₂ transport and storage infrastructure servicing at least five clusters and with some CO₂ transported by ships or heavy goods vehicles.

For the UK to reach net-zero, CCUS is a necessity not an option.