Three-day weekends and ending fire and rehire – trade unionists call for urgent action to improve pay and conditions for workers. 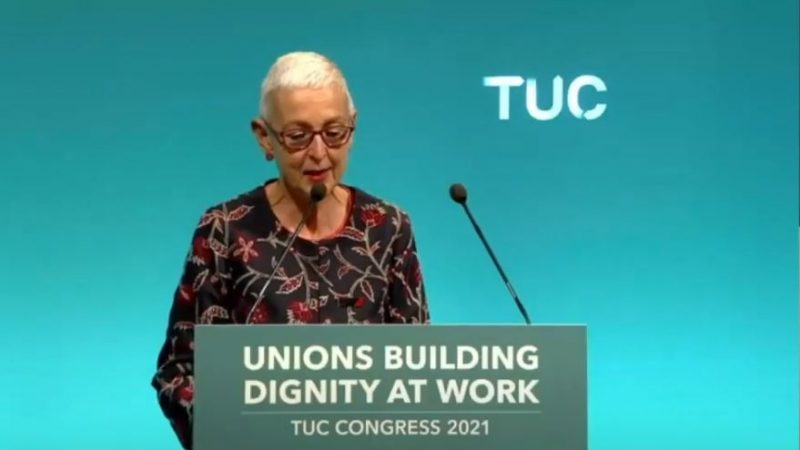 This issue of fair pay, workers’ rights and pensions has been a key focus on Day 2 of TUC Congress 2021, with several motions aimed at improving rights at work.

In a motion submitted by the Public and Commercial Services Union, seconded by the Educational Institute of Scotland and supported by the NASUWT – a TUC-affiliated trade union representing teachers – Congress says it condemns the government’s continued public sector pay restraint policy and its refusal to address public sector pension deficiencies.

The TUC notes how the government’s public sector polices have resulted in the value of the average public sector worker’s pay falling over the last 10 years.

“Workers are working harder and more flexibility, for less pay in real terms. Long-term pay restraint is having a detrimental impact on the living standards of workers, and it is compounded by rising inflation,” Congress noted.

Condemning the government for “ripping up the pensions cost-sharing agreement for public sector schemes”, the TUC says it welcomes the legal action being taken forward jointly by unions to challenge “scandalous government actions.”

Congress also questions the justification for higher pension age, stating how there are great variations in life and disability-free life expectancy. Consequently, the TUC is calling for the pension age to urgently be reduced as a means of addressing the “shameful levels of social and health inequality.”

It is calling on the General Council to implement a high-profile coordinated campaign in 2021/22 focused on pay restoration that recognises the vital contribution made by all frontline workers across public and private sectors during the pandemic. The campaign should be aimed at improving the value of public sector pensions, executing the immediate honouring of the public sector pension cost-sharing arrangement measures, and reducing the state pension age.

During a fringe event today, the topic of fair pay for key workers was discussed. Recognising that key workers have been lauded as heroes for their contribution during the Covid-19 crisis, but “applause won’t pay the bills,” the fringe event discussed how to build pressure for action to deliver pay justice.

Speaking at the Fighting for Justice – Fair Pay for Key Workers event was a panel from the Trade Union Co-ordinating Group (TUCG). The panel was chaired by NUJ secretary Michelle Stanistreet. Also on the panel was Sarah Woolley, general secretary of the Bakers, Food and Allied Workers’ Union (BFAWY). Woolley spoke of the need to put a stop to exploitative zero-hour contracts and how being classed as a keyworker doesn’t necessarily pay the bills.

“Just because you don’t need a university degree to work at Greggs, doesn’t mean you are unskilled.

“We need to work together to tackle exploitative giants like McDonalds and Uber,” said Woolley.

Also speaking at the fringe event was Mick Lynch, the recently elected general secretary of the National Union of Rail, Maritime and Transport Workers (RMT). Lynch spoke of how, as ever, it was the poorest in society who have not only lost the most but have worked the most.

Referring to the government opposition as the “most passive, docile Labour Party” that he’s ever known and one that has complete irrelevance to the working people of Britain, Lynch said “we cannot wait for Labour and bland politicians to wake up and smell the coffee.”

“All the wealth in society is made by the workers.

“We have to get back to the fundamentals of what trade unions are all about.

“We have to recognise we are in a class struggle.

Putting an end to ‘fire and rehire’

The controversial practice of fire and rehire, a tactic used by unscrupulous bosses during the pandemic to cut labour costs, is also being called into question at the conference today.

Speaking later today, Sharon Graham, Unite’s new leader, is expected to slam the practice of giving workers no choice but to accept inferior pay and working conditions as “one of the scandals of our age”.

Calling for support for Labour MP Barry Gardiners’s private member’s Bill to put a stop to the fire and rehire practice, Graham is expected to say:

“With Labour in opposition and a government reluctant to act, our response now must be industrial.

“No politician is coming to save us. Now is the time for trade unionism.”

In another bid to bolster workers’ rights, the Union of Shop, Distributive and Allied Workers, has put forward a motion centred on strengthening redundancy rights.

Recognising the devastating impact of redundancy is being worsened by the current lack of adequate rights to support and training opportunities, Congress is calling for the immediate implementation of a series of provisions to assist all workers facing redundancy. These provisions include a 90-day statutory period of redundancy consultation and a personal retaining budget for all workers that are given notice of redundancy.

Calling for a three-day weekend

In a bid to contribute and strengthen the push for more free time for working people, the University and College Union (UCU) is moving a motion for a public campaign for a three-day weekend. The motion is being seconded by the Communication Workers Union (CWU).

Coming as the Scottish government follows Spain in announcing it is to trail a four-day week, UCU leader Jo Grady says:

“There’s never been a better time for reclaiming our lives from the domination of employers.”

Gabrielle Pickard-Whitehead is a freelance journalist and a contributing editor to Left Foot Forward.