Davey was clear about the seats he wanted his party to take, specifically mentioning seats in Cambridgeshire and the Cotswolds, Stockport and Surrey, Hampshire and Hertfordshire. 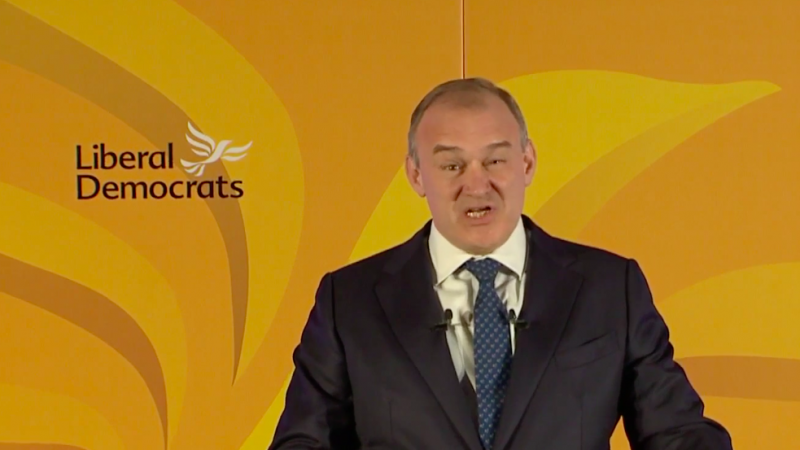 As the Lib Dem conference entered its third day, leader of the Liberal Democrats, Ed Davey, delivered his keynote speech. For a party still buoyed by their shock by-election win in Chesham and Amersham, this was a speech where Davey sought to set out his vision to build on that election win and make further electoral gains.

We take a look at some of the key takeaways from his speech.

An emphasis on the Tory blue wall

Even before Davey began his speech, there was a blue wall on the stage that was knocked down by Layla Moran MP and the party’s treasurer. Indeed, while the blue wall was mentioned throughout his speech, the Labour party was only mentioned once. Davey was clear about the seats he wanted his party to take, specifically mentioning seats in ‘Cambridgeshire and the Cotswolds,  Stockport and Surrey, Hampshire and Hertfordshire’. Repeated reference was made to the shock win in Chesham and Amersham, with an attempt to woo over Tory voters who felt let down by the government. The question some seem to be asking, is whether Davey’s gamble of focusing on the blue wall voters will go down well with the party membership. Its membership has declined by 27% in a year, with younger members blaming the party’s strong opposition against the Government’s proposed planning reforms. Is it a gamble that Davey could come to regret?

“We must be the party of education again”

A flagship Catch-Up Voucher policy was also announced by Davey as part of his major emphasis on education in his speech, as he sought to portray himself as leader of a party that was focused on a fair deal for everyone, especially after the A-levels and GCSE debacle last year that saw those from poorer and disadvantaged backgrounds disproportionately affected.

As part of the package, Davey called for a £5 billion programme of Catch-Up Vouchers for every school child, putting the money directly into parents’ hands to spend on whatever their children need most: tutoring in reading, writing or maths; music lessons; swimming classes or other physical education.

He said: “A third of the Education Catch-Up Fund should go to parents directly – in the most radical empowering of parents ever. Parents should get Catch-Up Vouchers to spend on what they want for their child’s education.

“Parents could choose to spend it with their child’s own school – on an after-school homework club, on one-to-one tuition, on special extra-curricular activities from sports to music lessons, provided for that child by their school.

“Or parents could choose to spend it on tuition they organise. Or with a music teacher they find. Or on therapy and counselling.

“As long as it was supporting the education and well-being of their child, it would be the parents’ choice.”

A personal and impassioned plea for greater support for carers

The Liberal Democrat leader became emotional as he spoke about carers and the government’s broken promises to fix social care, drawing on his own personal experiences of being a carer. He said: “I thought of the millions of people across the country who at that very moment were making big sacrifices, struggling to make ends meet, and feeling utterly exhausted as they do all they can to look after their loved ones.

“I thought of my mum, my nanna and my son John – and all those who the Prime Minister has let down. And I felt angry. Because as carers, we know that Johnson’s claim to have fixed the crisis in social care is just another of his broken promises.

“We know his plan won’t ensure our loved ones get the quality care they need.”

The Lib Dem leader called the Tories’ social care plan ‘perverse’ and one that makes the shortage of carers worse. He pledged to offer carers a fair deal, giving unpaid carers – and the people they care for – their own care budget.

The party of small businesses

As part of his attempts to park Lib Dem tanks on the Tories’ lawn, Davey was keen to portray his party as the party of small business, vowing to create new jobs and competing with multi-nationals to give consumers real choice. He vowed to replace business rates with a land tax and to raise the tax-free allowance against employers’ National Insurance Contributions.

Preventing the break-up of the Union

Davey didn’t miss the opportunity to take a swipe at nationalists both in England and Scotland, warning that the time to stand up for our union had never been more crucial. He was keen to emphasise that only Liberal Democrats and their liberal opposition to nationalism could make all the difference between ‘the break-up of our country or its salvation’.

Basit Mahmood is the co-editor of Left Foot Forward