Here's how we can show practical solidarity, not just sympathy. Pictured: more chaotic scenes from Kabul airport on Monday. 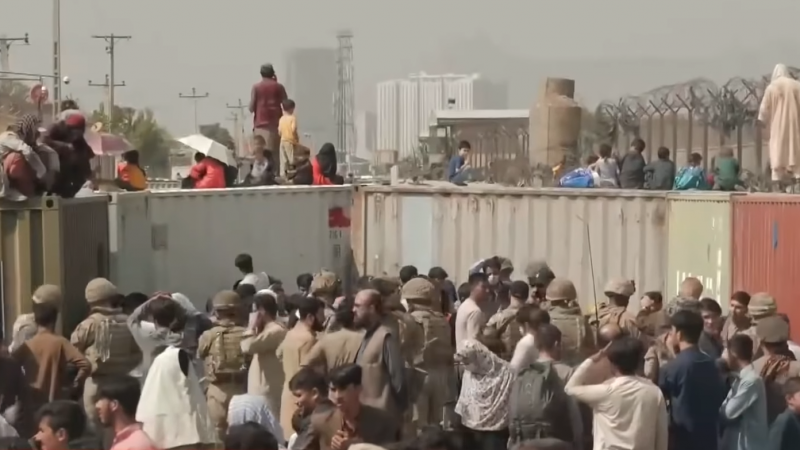 “Just like we are seeing now on our TVs, hundreds of us had to run for our lives because we were in danger of being killed.”

Gloria Peters is part of the All African Women’s Group – a community of over 100 women asylum seekers, refugees, and immigrants from all over the world who meet at Crossroads Women’s Centre in London. “We get together to help each other because we had no help from the government, just a hostile environment,” Peters says.

The “hostile environment” Peters refers to has been a common accusation made against the UK government – especially following Brexit – as harsh, inflexible immigration controls continue to be pushed through in Parliament. With the Taliban take-over in Afghanistan, more than one million Afghans are expected to be driven out of their homes, 80 percent of whom are women and girls.

“We see that this government says it is concerned about people, particularly women and children, who are fleeing for their lives from Afghanistan,” says Peters. “But hundreds of women in our group have been in that situation and we got no help – just a hostile environment. We have had to rely on ourselves and other women to find somewhere safe to live.”

Refugee women all over the UK feel similarly about the support received in the UK. “The women we work with at Women for Refugee Women have often been refused asylum and are therefore living destitute, with no right to work or housing, which can make them vulnerable to further abuse and exploitation,” says Natasha Walter, founder of Women for Refugee Women. “The Afghan women I have met in my time at WRW are often highly educated and ambitious women but face the huge challenge of trying to rebuild their lives far from home. Right now, they also struggling with the trauma of seeing their friends and family facing extreme danger as the Taliban retake power.”

“The public wrongly assumes that once people seeking asylum arrive in the UK they are ‘safe’ and can start their new lives but that can’t be further from the truth,” says Sol Escobar, Founder of Give Your Best, a non-profit offering an online catalogue of donated clothing where refugee women can shop for free.

“There are women in our community who have been waiting for their status to be recognised for years, especially over the last year of lockdown where cases were pushed and court cases cancelled. They are banned from working and have to survive with a £40 stipend per week for food, clothes, phone credit, bus fare, medicine, menstrual products, and in many cases they have children.”

For those who oppose the government’s lack of action for women refugees amid the chaos in Afghanistan, one question looms: what can we do?

Write to your MP

“Everyone who cares needs to advocate strongly with our MPs for more support from the government for evacuation and resettlement for refugees from Afghanistan and neighbouring countries,” says Natasha Walter. “The security situation is making it extremely hard to help women still in Afghanistan, and in this fast-changing situation we have to be prepared to continue to give support and not to lose interest when the news moves on.”

The Women’s Equality Party has drafted a letter which can simply be copied and pasted into an email to send to MPs. It urges the government to grant refugee status to current Afghan asylum seekers in the UK, provide safe routes for women and girls facing misogynistic violence, reduce barriers to family reunification, and commit to long term defence of the rights of women and girls in Afghanistan.

Choose Love, Women for Refugee Women, Refugees at Home, Women for Afghan Women, Give Your Best, and local refugee projects are all fiercely working for the rights of refugee women. They are doing good work in sustainable ways –  teaching English, developing skills and confidence, providing emergency food and accommodation, organizing therapeutic mental health support, and arranging immigration advice. For their work to continue, they need funding. Donating is a simple, straightforward way we can step up and support women refugees from Afghanistan.

Escobar urges those who care to sign up to support these groups:  “Follow them on social media and keep an eye out for anything they might need: monetary donations, clothes, food, phones, volunteer time, etc. The best way to support refugee women is via these organisations who know the needs of the refugee community. Donate mindfully and remember that what you give to a person, regardless of their immigration status, shows them what you think of them, so make sure it’s in good state.”

On the 20th of October, there is a Refugees Welcome event in Parliament Square to show the government that people in the UK support refugees and pressures the Home Office for more humane policies.

There is a government webpage set up to give British citizens options to help refugees in the UK. While this isn’t just for Afghan refugees, it is one way to support women seeking asylum in the UK. You will be given options of how to help based on your postcode – donating clothes, kitchenware, toys, and baby equipment, housing a single person or family, offering voluntary jobs, providing legal services, and befriending are just a few of the opportunities provided.

“People arriving from Afghanistan will most likely be arriving with nothing,” says Escobar. “It’s important to remember that reaching the UK is not the end of their journey and that women refugees also need long term to rebuild their lives in the UK.”

“Refugee women above all need the safety of being given refugee status and leave to remain, so that they are not constantly in fear of detention and deportation,” says Walter. Their greatest need may not be one most can meet, but it is a need we can advocate, sacrifice, and loudly champion for.

“My grandmother was a refugee woman from Nazi Germany who was welcomed into the UK and while she never forgot the horrors she had fled she was able to bring up her family in safety. I’d like to see all refugee women given the same chance for a fair hearing and a chance to rebuild their lives.”