This time the group wants to shut down the City of London. 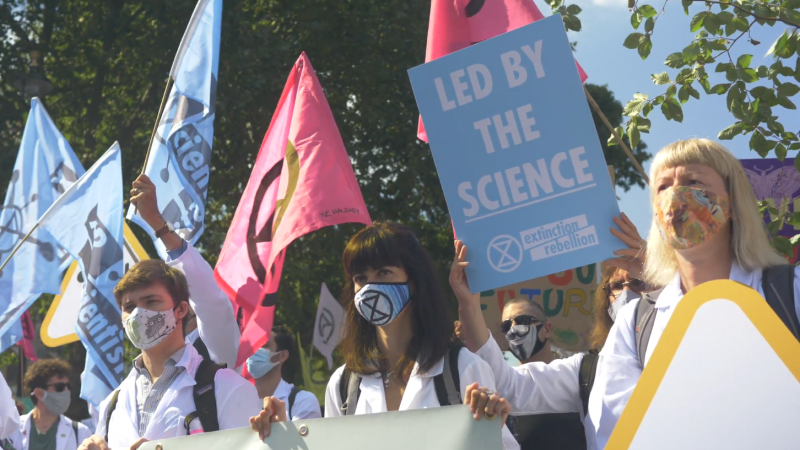 Extinction Rebellion activists have launched plans for two weeks of civil disobedience in London, beginning this month, following the release of the IPCC report on climate change on Monday.

The direct action group will take to the streets with plans to disrupt the City of London, targeting the ‘root cause of the climate and ecological crisis’ – the economic system.

XR has thrown its weight behind a new, immediate demand: that the UK government ‘stops all fossil fuel investment immediately’.

Monday’s IPCC report found that to have a 50 per cent probability of limiting warming to 1.5°C, the world needs to get to net zero carbon emissions in the next 20-25 years. Global carbon emissions have doubled over the past 50 years.

There is no formal end date to the upcoming XR protests – suggesting they could go on for significantly longer than the planned two weeks.

In a statement, the group said: “The future we fear is already here and there’s nothing left to do now but act.

“On impacts, the IPCC confirms what has become obvious: from heatwaves, to flooding, to droughts, every region on Earth is experiencing unprecedented weather extremes because of the CO2-jacked climate. Tropical cyclones are also intensifying and moving north.

“The IPCC also confirms that the land and oceans are on course to be – if they aren’t already – a net source of carbon emissions even in the lowest possible emissions scenario. The Earth’s carbon drawdown ability which has bailed us out for so long is hugely weakened.”

The group noted that since the Paris Agreement was signed in 2015, money being invested in fossil fuels has increased, not decreased.

The International Energy Agency said in May this year that all new fossil fuels investments must end immediately if we are to stay below 1.5 degrees of warming.

Clare Farrell, co-founder of Extinction Rebellion, said: “We are in the midst of a collective act of global, social evil which is unprecedented in all of history. We spend more time measuring it than trying to stop it, this is in and of itself a crime.

“We don’t need any more data to tell us how bad it is, we need to understand how change works. The time to work together is now, mass movements can create rapid change and we are in open rebellion until we see real action. This government is a joke, telling us how to wash our dishes when they should be leading the world towards a mobilisation that saves humanity. The UK has a duty to set a good example and other countries will follow. People want to live, but we need leadership and it’s nowhere to be seen. So join us, and we will be the leaders we need. Disobey the system that is killing life on earth.”

Under the name the ‘Impossible Rebellion’, this Rebellion will call on people across the country to take to the streets. “As floods and fires rage across the world – from Turkey, California and Athens, to London, Germany, China, Belgium and North Korea – it is clear that our climate is breaking down and that change – for better or worse – is coming, whether we like it or not. Taking to the streets together is the only reasonable response to the many crises we now face,” a spokesperson added.

Professor of Ecology and Ecological Economics at the University of Leeds, Julia Steinberger, said being part of XR was ‘one of the few ways I know my actions are in line with my research’: “I encourage every human who can to join the Rebellion.”

The richest countries have spent $40 billion more on fossil fuels than clean energy since the pandemi, the Guardian recently reported.

The protests come ahead of global summits on Climate (COP26) and Ecology (COP15) this Autumn.

XR will be holding its own parallel ‘crisis talks’ around the time of the conferences.

This month’s actions – beginning on Monday 23rd August – are expected to include occupying spaces in London, including roads to bridges.

Find out more about the Impossible Rebellion here.