Dave Carr said that the issue is not only about money, but also about the survival of the NHS. 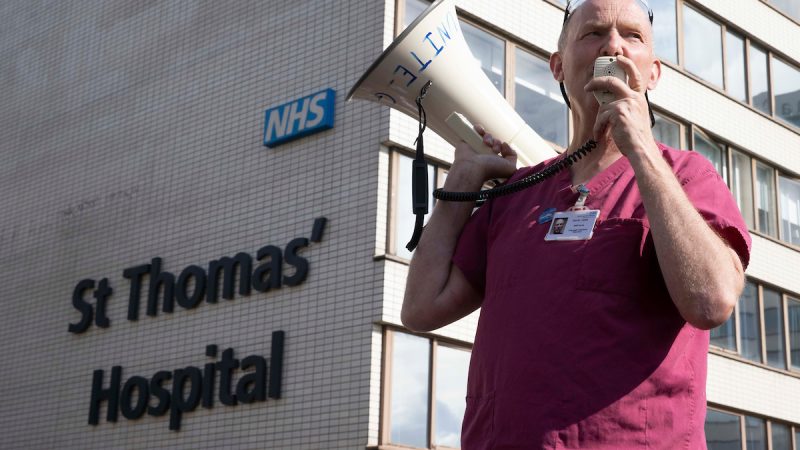 An NHS critical care nurse has spoken out against the government’s 3% pay rise for healthcare staff announced last week.

Dave Carr, who works at Guy’s and St Thomas’ Hospital in London, said that staff are “infuriated and dismayed by the pay rise” after being worked to breaking point during the pandemic.

Carr, who has been a nurse since 1991, said that the issue is not only about money, but also about the survival of the NHS.

The government announced on July 21 that NHS staff including nurses, paramedics, consultants, dentists and salaried GPs would receive the raise, backdated from April 2021.

Health and Social Care Secretary Sajid Javid said that healthcare staff were receiving the raise in recognition of their “extraordinary efforts” during the pandemic.

Members of the Unite Guy’s and St Thomas’ Hospital branch, including Carr, marched to Downing Street yesterday in protest.

They argued that the NHS Pay Review Body recommendation is an insult for an exhausted workforce who have battled Covid for the last 18 months.

Many healthcare workers also have seen 19% pay drop in real terms since the Conservatives took power in 2010.

Carr said: “For ten years our pay has been eroded by the low inflation pay rises that have effectively meant a pay cut for health workers.

“In real terms I’ve lost about 20% of the value of my salary in the last ten years.”

Carr is concerned that large numbers of staff will leave an already exhausted workforce.

He said: “We’ve gone through perhaps the most brutal periods in the NHS’s history. Not only have we had to work above and beyond, but we did it incredibly short-handed.

“We are shattered after the two waves of the pandemic, and we are expected to do our core job plus pull down the waiting lists. Now we’re facing the third wave.

“The impact of that offer is that people are demoralised. If you’ve got a service where the morale is as low as it’s ever been and then you compound it by saying you’re only worth 3%, people will leave the NHS.”

Carr is hoping the government will change their mind, and will choose to invest in the NHS and the people that work in it.

He said: “Our staff are utterly exhausted, demoralised, concerned about the third wave, and infuriated and completely dismayed by the government offering a 3% pay rise.

“If you value health in this country and if you want an NHS that actually works and can deliver its core services, you need to invest in it and invest in the people that work in it.

“The protest today is to kick off the campaign to let the government know that we’re sick of this. We want to see a restorative pay rise and an NHS that’s invested in properly.”