"There is nothing irrational about consulting a cycling organisation about measures to encourage cycling," the judge said, in a withering put-down. 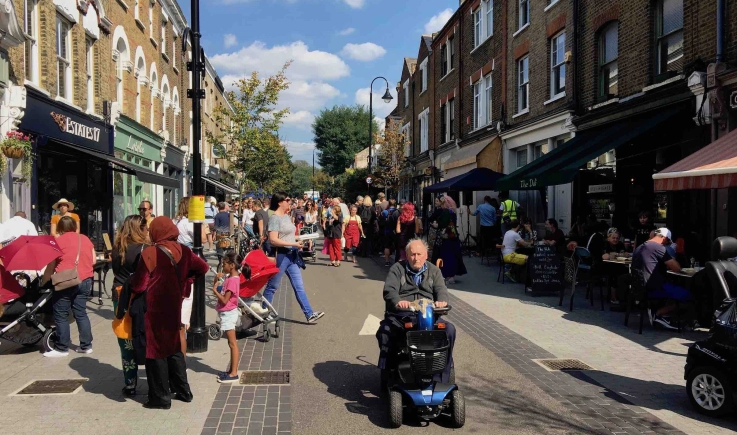 The High Court has thrown out a legal challenge to Low Traffic Neighbourhoods (LTNs) set up in a South London borough during the pandemic.

Councils across the country had been encouraged and part-funded by the Department of Transport to make cities more amenable to walking and cycling when public transport and car use was strongly discouraged.

Areas including parts of London have seen LTNs become wrapped up in a ‘culture war’ between pedestrians and car-users over the past year.

But green groups and public transport bodies have almost universally welcomed the move to more pedestrian-friendly streets. Contrary to much of the commentary, LTNs allows vehicle access to all properties for residents living on that street.

Transport for London has noted that more than 80% of deaths on London’s streets are people walking, cycling or on motorbikes and mopeds. “If traffic keeps increasing without changes in neighbourhoods, streets will become more unsafe for people to walk and cycle on,” the public body has stated.

On Monday, Mr Justice Kerr dismissed all four of a local campaign group’s allegations regarding the traffic control measures – which have been hailed as a victory for the move to greener, more pedestrian-friendly cities.

While many LTNs are initially controversial, there are already at least 25,000 in place across the UK – with many people not realising that their local quiet streets have often been low traffic zones for decades.  Research by the BikeIsBest campaign found that London has nearly 3,700 such schemes, while there are more than 1,500 in Greater Manchester, 1,000 in West Yorkshire and 800 in the West Midlands.

The judge said: “In my judgment, the evidence is clear: it was the coronavirus epidemic and the resulting statutory guidance that led to abandonment of [the] conventional and leisurely approach to introducing LTNs. The Secretary of State urged local authorities to take radical and almost immediate measures to enhance walking and cycling and pointed to their power to do so using TTOs and ETOs.”

Dismissing another anti-LTN complaint – Lambeth Council consulting some organisations but not others  – he added: “Nor do I accept that the claimant can complain of an irrational choice of organisations with which to consult. There is nothing irrational about consulting a cycling organisation about measures to encourage cycling.”

He said it was acceptable for the council to use a ‘rolling’ equality impact assessment of LTNs, due to ‘the urgency expressed in the statutory guidance, the near stasis of public transport and the need to restrain vehicle traffic in residential areas to allow walking and cycling to flourish’.

However, the claimants in this court case, backed by anti-LTN group One Lambeth, have been granted permission to appeal on one of their four claims, the allegation that the Public Sector Equality Duty was breached.

Local resident and Green Party member Leon Maurice-Jones told LFF he ‘loved’ the LTNs, but was concerned the debate has shifted from the environment and pollution to technical disputes.

Another resident, Emma Slack, a car-owner who lives in one of Lambeth’s Low Traffic Neighbourhoods, hailed the move towards ‘more active and less car-dependent travel’: “The introduction of the LTN was wanted by many many residents to stop the extraordinary amount of traffic using our road, and surrounding roads, as a short-cut between Brixton Hill and Tulse Hill.”

She added: “The traffic was huge both in volume but also in the size and weight of the vehicles – totally unsuited to our residential road….The LTN in my area really made me think long and hard about the city I want to live in and it’s caused a fundamental shift in my own behaviour.  The more of us who embrace this the less polluted and less congested our city will be for all of us.”

Campaign group Living Streets has been particularly vocal in promoting LTNs, noting: “Motor vehicles have come to dominate our cities, towns and villages. In 1970, there were 13 million vehicles on Britain’s roads driving 145 billion miles. Last year, there were 38 million vehicles driving 329 billion miles. Add to this the rise of technology such as Sat-Navs and mapping tools which route drivers through any area to reduce journey time. Our local streets have never felt more dominated by motor traffic.”

Streatham Wells is the only LTN in the council’s transport strategy that hasn’t yet been established. Alex Yedigaroff, chair of the Livable Streathham Wells group, told LFF that after the court case, residents are hopeful that the Streatham Wells LTN will be implemented without further delay: “Our traffic issues are as bad as ever and we’re ready to work with Lambeth on implementation.”

The lawyer for claimant Sofia Sheakh, said: “We welcome Mr Justice Kerr’s decision to grant permission to appeal….In view of the proliferation of LTNs around the country, there is a compelling reason why this appeal should be heard.”