'I know how dehumanising it is to be treated like you’re faking your disability,' says Rachel Charlton-Dailey. 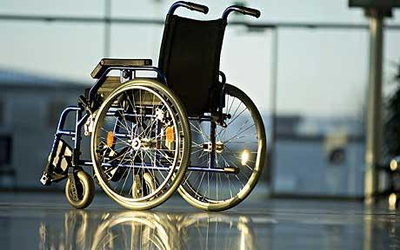 Last year £15 billion of benefits went unclaimed in the UK, the charity Turn2us has found, but it’s not necessarily because people don’t try to claim them.

While it may seem like people just aren’t checking that they are entitled to benefits, it can’t be ignored that many disabled people face barriers in claiming the benefits that they are technically entitled to.

Disability benefits including ESA but also Personal Independence Payment (PIP) are notoriously hard to qualify for. The application process is complicated and exhausting, with the application itself being over thirty pages long.

It then typically takes three months for an assessment, which includes stringent, invasive questions and a physical assessment. All of which are carried out by unsympathetic assessors who aren’t medically qualified and in some cases seem to be trying to trip the claimant up.

After going through the awful process of having to prove our illnesses to someone who doesn’t have any knowledge of the nuances of our lives, disabled people may still find themselves proved to be not disabled enough and denied the benefit that by rights they should be entitled to.

As a disabled person I have been through this myself and know how dehumanising it is to be treated like you’re faking your disability (but at the same time like you’re not doing it well enough) and then cast out by the people who were elected to protect you.

In my assessment report the reasons for not qualifying include the fact that I said I could go leave the house as long as I was accompanied. They paired this with the fact that I said I could work at a computer for an hour a day. They took this to mean that I could work an office job, though I’m not sure what office would’ve let me take my Mum and leave after an hour.

On the day of the assessment they were running behind by three hours, they used the fact that I waited instead of leaving for fear that I may not get a new appointment any time soon as proof that I could sit for a long period of time, despite the fact that this wasn’t something I’d said I couldn’t do.

They also made personal assumptions based on their own judgements about me to determine whether they thought I was depressed. These included the fact that I had made an effort with my appearance, was maintaining eye contact (I wasn’t) and made a joke – a self deprecating one about my mum having to hide all the knives.

The whole experience was deeply traumatising and something I struggle to come to terms with still.

The problem isn’t that benefits are going unclaimed, it’s that people are either denied benefits they’re technically entitled to, or they’re made to feel ashamed when they do need to claim them.

Sonya Ruparel, Director of Programmes and Partnerships at Turn2us, said: “There is an endemic issue of unclaimed benefits in the UK. The confusing, sometimes hostile, and often stigmatising world of social security has led to millions of people not claiming their entitlements.”

While it’s important to highlight that many are missing out on benefits, it’s even more important to bring light to the reality that disabled people face when we seek help.

The reason so many disabled people miss out on benefits is that we are deemed unworthy of them, not because we don’t try hard enough. This isn’t our fault.

Rachel Charlton-Dailey is a freelance journalist and disability activist.