As the one-year anniversary of George Floyd's murder approaches, action accelerates to stamp out systemic racism. 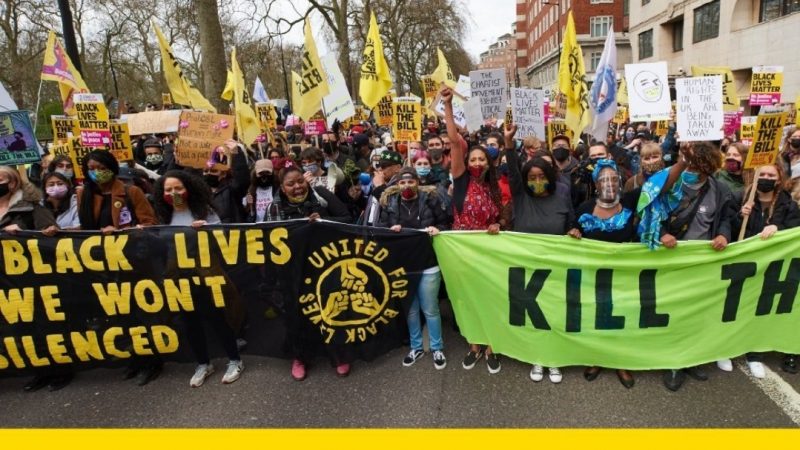 Activists from the Kill the Bill movement are calling for a fourth national day of action.

Led by Kill the Bill Official – a female-led coalition of activist groups created and spearheaded by United for Black Lives – the event will take place on Saturday, May 29.

It will involve a new wave of protests across the country, as the solidarity movement gathers pace once more. In London, the protest will be attended, once again, by former Labour leader Jeremy Corbyn, who will be speaking at the event.

‘Action is a must’

The announcement of another day of Kill the Bill action comes after the Queen’s annual speech last week, where she outlined parliament’s vision for the coming year. The speech confirmed the government’s plans to crack down on protest rights.

Speaking of the “undemocratic and authoritarian Police Crime and Sentencing bill” being delineated in the speech, Kill the Bill Official said:

“It is clear that our government is determined to push this bill through and restrict our human rights. Their vision for the country is an undemocratic and racist police state. The need to keep up the pressure is great; action is a must.”

Kill the Bill Official describe other aspects of the speech as “deeply troubling,” including new migration laws seeking to block refugees entering our country and pushing right-wing culture war issues like freedom of speech.

One-year anniversary of the murder of George Floyd

May 29 is just days after the one-year anniversary of the murder of George Floyd at the hands of US police, which took place on May 25, 2020.

Floyd’s death sparked a global Black Lives Matter uprising against, not only his murder, but all systemic anti-black racism. Protests were held throughout the UK with tens of thousands of people gathering in solidarity.

Figures by Inquest, Truth, Justice and Accountability show that since 1990, there have been more than 1,700 deaths in police custody or of those following contact with the police in England and Wales.

The forthcoming Kill the Bill event will be made in solidarity and remembrance of George Floyd and all those who lost their lives to police brutality.

“We have been brought together to oppose the government’s Police, Crime, Sentencing and Courts Bill, which seeks to further the UK’s attack on human rights. This date is of particular importance to us as an organisation, as it represents the tyranny and racism we seek to resist,” say Kill the Bill Official.

The activist coalition group also warns that handing police more power to crack down on protest, increase stop and search and criminalise Gypsy, Roma and Traveller communities, will lead to more violence from the state and further entrench the injustices in our society.

As well as another day of action, Kill the Bill Official will also be hosting an activism event on Instagram on May 25. The live streamed event is in association with United for Black Lives to mark the anniversary of George Floyd’s murder and Africa Liberation Day.

It will feature a range of speakers from the UK and abroad, speaking about the impact of George Floyd’s murder, the growing BLM movement, systemic racism in our society and many more topics.

United for Black Lives is hosting an online rally on May 23 to raise of the #FreeSiyanda campaign.

Siyanda Mngaza is a 20-year-old black woman who is currently serving a four-year prison sentence. Siyanda was the victim of a brutal racist attack by two white men and a white woman while holidaying in Wales in May 2019.

As Lee Jasper, a human right’s activist who is working with United for Black Lives on the Free Siyanda campaign describes, as a consequence of defending herself, the young woman was charged, convicted and sentenced. Her attackers all walked free.

The campaign is currently raising funds to appeal Siyanda’s case at the Supreme Court of Appeals. The public petition calling for justice has already raised over 500,000 signatures.

In response to the continued campaigning, support, and solidarity to build and international, intersectional and intergenerational mass movement to fight police brutality, racial injustice and the government’s commitment to curb the right to protest, Delia Mattis, a social justice activist with Kill the Bill Official, said:

“The attempt by this government to restrict our right to protest has backfired spectacularly. Last week we saw the scenes in Glasgow as the Home Office attempted to detain and deport two Muslim men during Eid, their most religious day. The Kenmure Street community responded in solidarity and many protesters blocked the Border Agency van forcing them to release the two detainees.

“On 29th May we’ll be sending a clear message to the government that we will continue to protest for as long as we feel the need and we’ll also be remembering George Floyd,” Delia Mattis told Left Foot Forward.