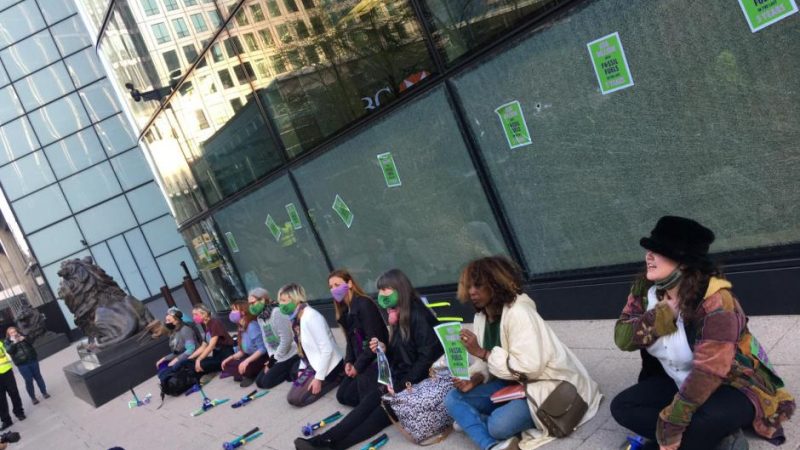 At 7 am this morning, women from Extinction Rebellion and political party Burning Pink broke windows at HSBC’s UK headquarters in Canary Wharf.

The women referenced the suffragette movement with patches on their arms reading ‘better broken windows than broken promises.’ They also placed stickers saying  ‘£80 billion into fossil fuels in the last 5 years.’

After breaking the windows the women then sat down and waited to be arrested.

According to a report released this year from the Rainforest Action Network, HSBC is Europe’s second-largest financier of fossil fuels after Barclays. The report details how HSBC has provided at least $111bn (£81bn) to some of the world’s largest fossil fuel firms since the Paris Agreement was signed in 2016.

Grandmother and member of Extinction Rebellion from Preston Susan Reid, 62, said: “I shouldn’t be having to do this but I think we owe it to our children and grandchildren to act in whatever way we can. I would like to enjoy my retirement with my grandchildren, but instead I have to spend it fighting for their future because banks like HSBC are happy to keep making money from fossil fuels no matter the risk.

“We’re in a planetary emergency and people are dying right now. Just because it’s not on our doorstep doesn’t mean it’s not already happening in the global south. What we are doing today is an act of care.”