The police had a choice with the Sarah Everade vigil. And they choose wrongly. 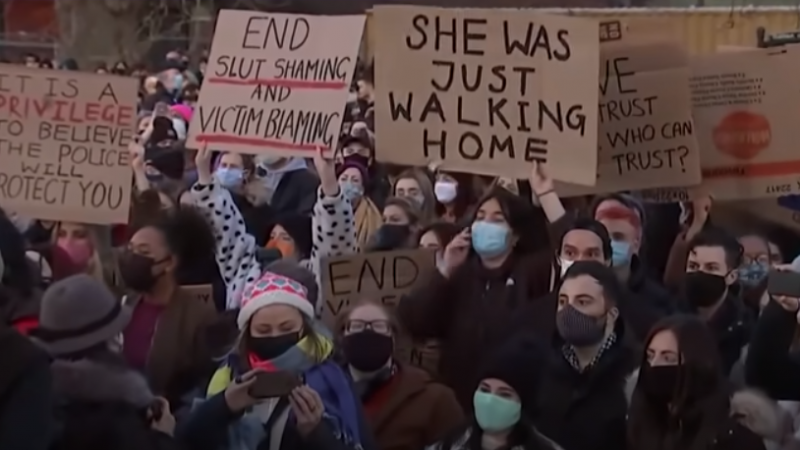 The vigil wasn’t even a protest and the organisers were the most cooperative, respectable bunch the police are likely to find. Imagine what they will do on a regular basis with the extra-ordinary, post-Covid powers the government is planning to give them to break up peaceful protests.

The right to hold the vigil went to court and the judge made clear that the police had a choice of letting the Sarah Everade vigil go ahead in an organised, Covid safe way. Imagine the images we might have had this morning of police quietly patrolling the vigil, having a quiet word with people about the need to keep a social distance and handing out hankies, or spare candles. It would have been everything we all needed after the tragedy and shock of a police officer’s arrest.

Instead, we have anger. Anger at the physical intrusion of uniforms and heavy boots into a gathering of women in mourning for someone who felt like one of them. Anger at the way the police kettled women into a small space around Clapham Bandstand and squeezed them together. Anger at the initial press statement from the Met Police justifying their assault with the usual abusers refrain of ‘you made me do it. I had to keep you safe from yourself.’

I think that Commissioner Cressida Dick should resign. Of course, we need to change the culture of the police, so they don’t issue victim blaming advice to women about not going out alone. We need a more interventionist Mayor who will make clear to the police when they are making a mess of things. However, the biggest thing we have to do is stop this kind of thing happening again. Experience tells me that won’t come from a new Commissioner, or changing the canteen culture, it relies mostly on not giving them wide ranging powers and expecting them to use them sparingly. It never happens.

The Covid regulations have led to one wrong arrest after another. The minimal parliamentary scrutiny and a huge government majority have combined to push through laws at a frenetic pace, with the police unable to keep up. In the first eight months of the pandemic the Lords never debated a current set of rules, as they had already been replaced by a new set. I often felt sorry for the police as they made a false arrest and got the regulations wrong. It wasn’t all their fault it was mostly the government’s failure to communicate properly.

Government attempts to rush through new rules on protests

The government is trying to rush through their new set of rules on disruptive protest with similar haste. They managed it on the Covert Human Intelligence Sources (spycops) Bill and they hope that a similar lack of Labour opposition will enable them to do it with this. The spycops Bill gave police and their criminal spies illegal immunity from any law they felt it was “reasonable and proportionate” for them to break. It was one of the most dangerous pieces of legislation any country could enact, yet a Labour frontbencher in the Lords said he was “proud” to support it. My fatal amendment to kill the Bill was supported by a few brave, Labour rebels, but most voted with the government.

Labour need to defend the right to protest

As much as I welcome the Labour leadership saying they will oppose the Policing Bill due to its lack of action on women’s safety, I want to also hear them talk about defending the right to protest and to explain how many changes to government policy have resulted from disruptive challenges to vested interests. Think of the local people blocking road outside fracking sites and the way the UK finally dumped this climate damaging policy. Think of Extinction Rebellion and the huge Parliamentary vote in acceptance of the climate emergency. Think of the successful protests in Sheffield and elsewhere against the mass cull of local trees. These campaigners already had to risk fines and criminal charges to make an impact and get politicians to change course. This Bill makes all of this harder for ordinary people and easier for the vested interests.

It is awful that Sarah Everade’s family have had to suffer being in the midst of all this controversy, when I’m sure they simply want justice and space to mourn. Her death is a tragedy. Her memory and whether her death changes anything is down to us to decide.