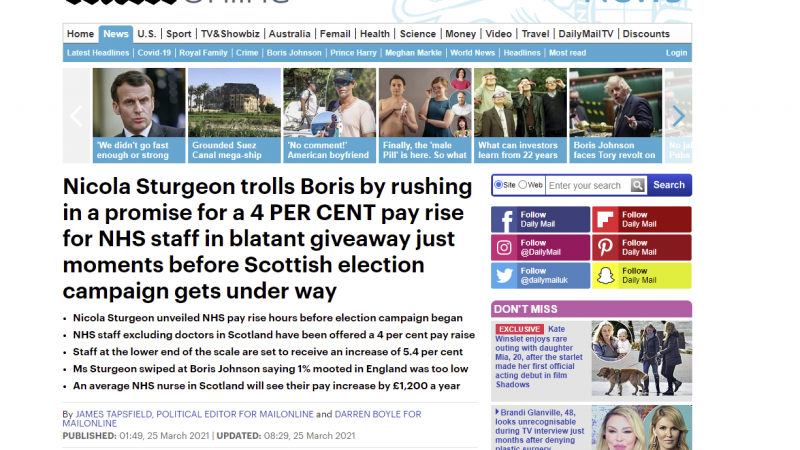 After the Scottish government offered NHS Scotland staff a pay rise of at least 4%, the Daily Mail said the move was an attempt to “troll” Boris Johnson over his real-terms pay cut for staff in England.

While Scottish Health Secretary Jeanne Freeman said the move was designed to “mak[e] the applause real”, the Mail called it a “blatant giveaway just moments before Scottish election campaign gets under way”.

While 4% is more than the UK government’s 1% offer and Labour’s 2% demand, it is far less than the Royal College of Nursing 12.5% ask. Scottish health unions will now discuss the Scottish offer with their members.

Polling shows a majority of the UK public thinks the 1% offer is too low and that NHS staff in England should go on strike against the move. NHS staff organised a ‘slow clap’ to protest against it.

Elections for the Scottish Parliament are being held on 6 May. The latest polls have the SNP on around 50% with Labour and the Conservatives around 20% each.

Their association with Boris Johnson and the UK government are widely thought to be a drag on the Scottish Conservative’s popularity. In December, Scottish Tory leader Douglas Ross said he is “not bringing up the Prime Minister” on the campaign trail.