The Scottish Conservatives are struggling to distance themselves from an unpopular PM...while keeping the cash from Tory HQ. 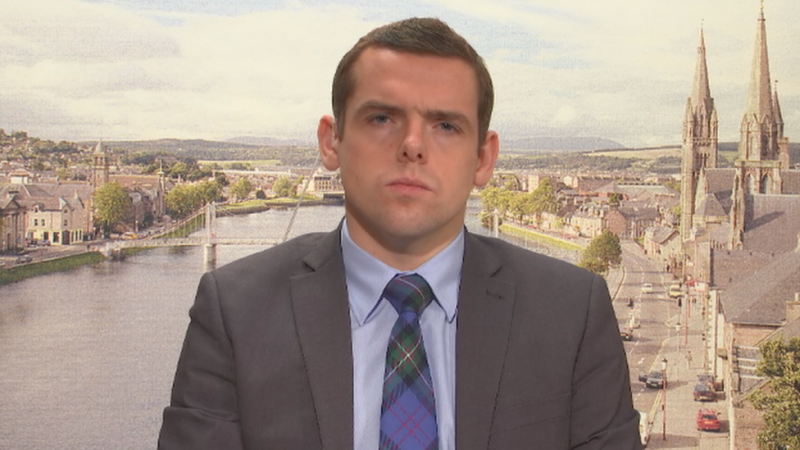 The leader of the Scottish Conservatives has said that he is “not bringing up the Prime Minister” when campaigning for next year’s Scottish Parliament elections.

Douglas Ross – who was appointed leader of the troubled Scottish Conservatives in August – told Times Radio that rather than talking about Boris Johnson, he was focussing on the SNP’s domestic record instead.

The Scottish Tory leader acknowledged Boris Johnson’s low approval ratings in the country, saying “he is not immune to the opinion poll ratings that suggest he is considerably less popular than other political leaders in Scotland”.

Boris Johnson came under fire last month for branding Scottish devolution a ‘disaster‘ – because the Scottish National Party has become so popular.

Mr Ross was left having to defend Johnson’s comments. On Times Radio today, he insisted that it was “healthy” that he “can disagree with the Prime Minister and that I can take different positions from the UK party.”

Boris Johnson’s approval ratings in Scotland are shockingly low – with 74 per cent of Scots saying he is doing badly, according to a recent YouGov poll.

The Scottish party reportedly feared a funding cut from HQ in London if Douglas Ross did not get behind the PM after his comments on devolution.

Douglas Ross: “I’m focussing on…how we take the challenge to the SNP, so I’m focussing on their domestic record. I’m not bringing up the Prime Minister, if he comes up, some people like him, some people don’t, that’s the nature of politics. You know, he is not immune to the opinion poll ratings that suggest he is considerably less popular than other political leaders in Scotland, but he is the Prime Minister of the whole country, he is the Prime Minister of the United Kingdom and he is absolutely passionate about the UK remaining a strong family of four nations together.”

Matt Chorley (Times Radio): “It’s slightly odd, isn’t it? A politician out campaigning, not mentioning their leader when they are out and about.”

“You know, we can have this relationship, and I’ve made this point before. Some people seem to think it’s strange that I can disagree with the Prime Minister and that I can take  different positions from the UK party. I think that’s healthy.”

Commenting, SNP Depute Leader Keith Brown MSP told Left Foot Forward: “No amount of bluster will distance the Scottish Tories from Boris Johnson – it is an insult to think that if Douglas Ross just doesn’t mention his boss then voters in Scotland will forget about him.

“The people of Scotland won’t forget Douglas Ross endorsed and voted for Boris Johnson to become Prime Minister, enabling him to drag us out of the EU against our will, strip powers away from the Scottish Parliament threatening things like our food standards and environmental protections.

“If the Scottish Tories were a different party then they would have voted at Westminster to protect Scottish jobs and the economy instead of trudging through the yes lobbies, at Boris Johnson ’s beck and call.

“If the Tories wants to take on the SNP on domestic issues then they are more than welcome to, as the people of Scotland consistently trust the SNP more than the Tories to deliver for Scotland in education, health and the economy.”

The Scottish Conservatives have had a string of leadership crises, and came under fire for continuing to use Ruth Davidson on their general election leaflets last year…despite her standing down as their leader nearly six months before.

Ruth Davidson is now a Conservative peer in the House of Lords – as well as an MSP, and leads the party in the Scottish Parliament, since Douglas Ross doesn’t hold a Holyrood seat.