"Liz Truss cannot simply ignore these problems while businesses and jobs across the country are under threat." 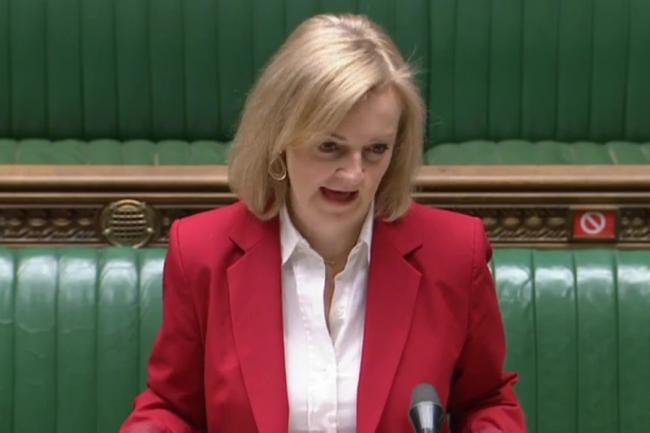 MPs have written to trade minister Liz Truss after it emerged that she vetted questions for next week’s ministerial questions – removing submissions relating to Brexit.

In correspondence seen by LFF, Shadow Secretary of State for International Trade Emily Thornberry told civil society groups on Tuesday: “As many of you know, every six weeks or so, I have the opportunity – alongside every other MP – to ask questions to Liz Truss in Parliament on behalf of our constituents and the country about international trade.

“There are always a huge variety of topics tabled in advance for discussion, reflecting the number of different businesses affected, and the range of connections between trade and other vital issues like human rights and climate change.

“Today, we received the extraordinary news that Liz Truss has gone through the list of topics for next week’s session and ordered the removal of six questions relating to trade with Europe, despite the severe problems that have recently been facing British exporters.

“I have never known anything like it, and neither have most of my colleagues in Parliament. With representatives from the other opposition parties, I have written to Liz Truss to register our protests. I will keep you updated on what response we receive.”

Emily Thornberry told LFF: “Liz Truss cannot simply ignore these problems while businesses and jobs across the country are under threat. We need to demand answers and action, and this letter is just the start.”

LFF has republished the letter to Liz Truss in full below, signed by Labour, the SNP, Lib Dems, Plaid Cymru, the Green Party and the Social Democratic and Labour Party.

A Department for International Trade spokesperson told LFF: “All parliamentary questions are directed to the department best placed to respond. This is standard practice in Government and has been the case under successive governments.

“The Cabinet Office lead the Brexit Business Taskforce to support businesses with regards to the EU Trade Deal.”

We are writing to register our grave concerns and strong protests regarding your refusal to answer a number of questions relating to the UK’s trading relations with Europe – and one on inward investment in Northern Ireland – at next week’s session of International Trade oral questions.

At a time when British exporters are crying out for the government to acknowledge and address the problems they are facing in the wake of Brexit, the Secretary of State for International Trade cannot simply put their head in the sand and pretend that these issues are not their concern.

Even if you are anxious to distance yourself from the mess that your Cabinet Office and Downing Street colleagues have created, there are four practical reasons why that position is untenable:

In summary, there is no sensible, logical reason for you to refuse to answer questions about the UK’s trading relationships with the EU, let alone inward investment in Northern Ireland, other than your desire to shirk responsibility for the failures of your colleagues elsewhere in government, and the consequences being felt by exporters throughout the country.

With all due respect, that is not a good enough excuse. Officials in your department, including those employed in European capitals, are working hard every day to help UK businesses with their trade and investment activity and resolve their export problems, and the least they all deserve is a Secretary of State prepared to answer questions about that work in Parliament.

We would therefore urge you to reconsider your rejection of MPs’ questions in this area, if not for the next session of International Trade orals on the 25th February – given the call lists have already been drawn up – then certainly at future sessions in the coming months.

After all, many of us may wish that one single Minister was taking a grip of these problems and accepting full responsibility for dealing with them, but in the absence of that, what we cannot afford is individual Ministers deciding to exempt themselves from their share of the collective task, least of all the Secretary of State for International Trade.