Climate campaigners are celebrating the news, following a long-running campaign to stop the practice. 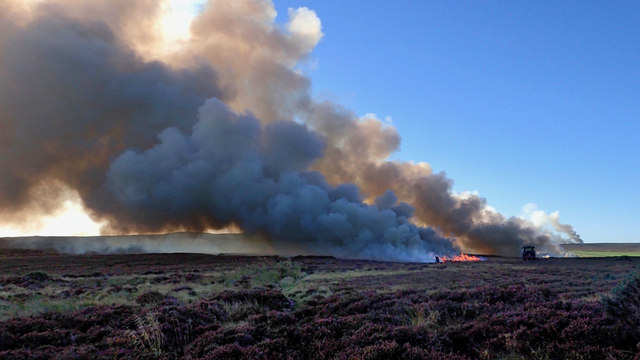 The government has announced new legislation which will prevent heather burning on peatlands, following a campaign by environmental groups and Labour MP Olivia Blake.

The controversial practice of burning heather-covered peatland has long been criticised by campaigners for releasing millions of tonnes of CO2 into the atmosphere, damaging biodiversity and increasing the threat of flooding. Campaigners have also credited the practice with recent increased flooding.

The ban follows a Government pledge to phase out the practice of moorland burning over a year ago.

Moorland burning is designed to encourage the growth of new heather shoots, to create a more attractive habitat for grouse. But climate campaigners say it damages the peat underneath, releasing previously locked-in greenhouse gases into the atmosphere.

Earlier this year Sheffield Hallam MP Olivia Blake, whose constituency contains areas of moorland in the Peak District National Park, secured a debate on the issue in Parliament, noting: “There is no way that this Government can tackle the climate crisis without ensuring that our peatlands continue to store this colossal quantity of carbon. It would be an absolute catastrophe if it is released.”

The new regulations will prevent the burning of any specified vegetation on areas of deep peat (over 40cm depth) on a Site of Special Scientific Interest that is also a Special Area of Conservation or a Special Protection Area, unless a licence has been granted or the land is steep or rocky.

Paul de Zylva, nature campaigner at Friends of the Earth, told LFF: “Burning peat has no place in managing land. It contributes to climate breakdown and is damaging to nature. It’s great that the government wants to end peat burning on the nation’s nature havens, but with lots of Britain’s peatlands falling outside nature reserves this announcement still leaves vast areas at risk of being burned.”

Following the government announcement Blake said: “This is a hugely welcome victory for campaigners who have been pushing the government on this for years now. It is a positive step that ministers have finally recognised that a ban is necessary, rather than the voluntary agreements which they have favoured in the past.

Blake added that campaigners are still awaiting details of the policy from ministers.

“Banning heather burning is also only part of the picture. The government must do more to restore our peatlands. I have asked the Government several times when we can expect their long-awaited strategy for peatland restoration and I will continue to hold them to account on this. One thing is clear: the climate and nature emergency demands action. We urgently need a strategy for our peatlands that will lock CO2 in the ground, protect biodiversity, and help restore this precious natural resource,” Blake said.

The victory comes a week after new regulations were introduced in Scotland making it illegal to intentionally kill, injure or take mountain hares at any time unless a licence is obtained from this March.