A Spanish court ruled they were workers and so entitled to social security payments. 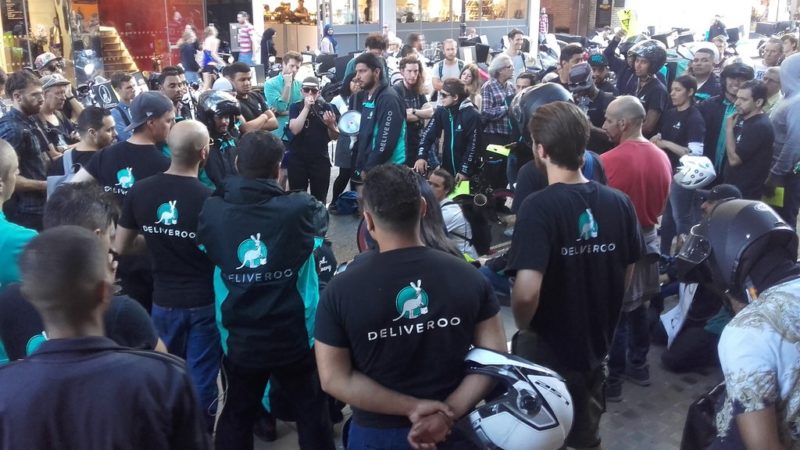 This Tuesday, a judgement in a Barcelona court meant that Deliveroo suffered a stinging defeat and workers (as the court decided they were) have won a significant victory.

Thanks to the work from RidersXDerechos, 748 riders were declared ‘false autonomos’ (fake self-employed) and, barring a successful appeal from Deliveroo, they will be forced to pay the €1.3 million in social security payments that they withheld.

The judge reasoned that, if they weren’t using these riders, they would have to hire delivery people (who would have had social security paid).

The judge also ruled that Deliveroo riders are subordinates not independent contractors. This is because they don’t get to decide when the job is done or what the rate is. And they wouldn’t be able to find work without Deliveroo’s app.

This ruling follows on from a string of similar cases in Spain which have clawed back €25m for workers.

This might sound familiar to British readers. Although the UK has seen some victories such as the GMB-led win over Hermes, a 2018 ruling that Deliveroo riders were not workers was a significant setback.

The laws working against unions in the UK must be fixed but the Spanish case also shows that we sometimes overlook the vital role that unions play in the actual enforcement of laws.

In Spain too, left-wing politicians are promoting another law change when unions on the ground are simply asking for the current law to be enforced.

This overemphasis on legalisation and policy is understandable when you look at the composition of modern, apparently left-wing, parties and the Labour party is no exception.

As well an embarrassing indictment on the Labour Party’s ability to claim to represent working class people, it’s no surprise that a gentrified political party has far too much faith in policy-wonkery and places too little emphasis on getting their hands dirty.

If there is to be a labour movement worthy of the name in the post Covid world, then this liberal think tank, graduate style Fabianism needs to be massively reined in.

It may make the well-paid advisors in Parliaments feel good when another law goes on the books but without union boots on the ground, all they will ever be is paper tigers.

For now though, even in these bleak times we can all feel a little bit happier that the tide may slowly be turning in the right direction.

Edward Anderson is a former Labour member living in Spain and is currently a member of UGT, one of Spain’s largest Trade Unions