The Right doesn’t get to define ‘family’ – Labour’s promise to be the party of family can present a radically different offering to all kinds of families across the UK. 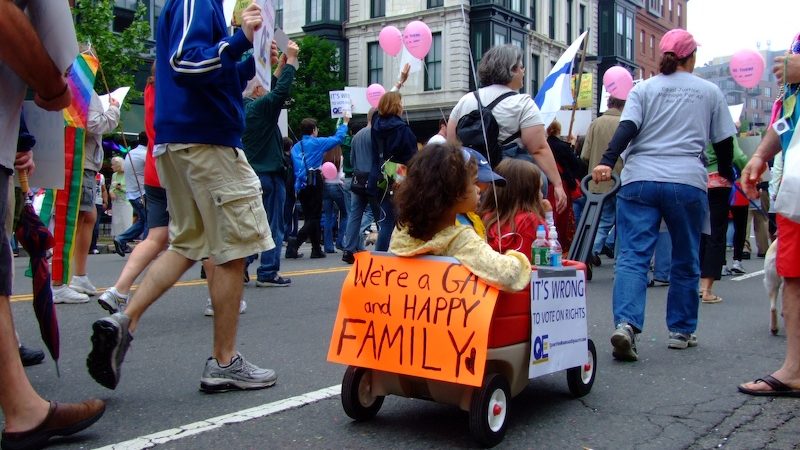 Growing up in a gay household in the 1990s, I was, according to the Conservative Government’s Section 28, living in a “pretended family relationship.” The State didn’t recognise my family – only caring about the father, mother and 2.4 kids model. So when the New Labour Government of the early-00s swept away anti-LGBTIQ legislation including Section 28, unequal age of consent and a ban on gay adoption, it felt like this was a party for the family – families that looked like mine.

In a piece for the Telegraph, Keir Starmer told readers that Labour will be the “party of the family.” The comments provoked a backlash – not least because the term ‘family’ is now almost always accepted on far and religious right terms to mean anti-LGBTIQ, anti-abortion, anti-sex education and pro-smacking.

As someone who has spent a lot of time researching the far and religious right’s attitudes to family (in fact, I’m writing a book about it), I understand the uneasy reaction to Starmer’s comments. For decades now, the rar and religious right have sought to hide their reactionary and sometimes violent views under the moniker ‘family rights’. Take, for example, the World Congress of Families – a far right organisation designated as a ‘hate group’ by the Southern Poverty Law Centre. While claiming to be ‘for’ the family, WCF pushes an anti-LGBTIQ and anti-feminist agenda. Then there’s CitizenGO, linked to WCF via board members, who claim to be ‘pro family’ – while pushing an anti-LGBTIQ agenda.

These are two of many examples. And they’re examples that demonstrate the urgency for the Left to reclaim the family narrative from a reactionary far right.

So what would it mean for Labour to reclaim ‘family’ from the right? It means being a party dedicated to equality – that supports parents of whatever gender or relationship status to care for their children through welfare, early years education, and a commitment to making sure that parents are supported to have a real choice when it comes to work, flexible working and caring.

This is urgent. The welfare cuts instigated by Conservative austerity have led to an increase in child poverty in what surely counts as an anti-family move. The cuts to child tax credits, which limits the benefit to two children, has forced women to abort a wanted child because they simply cannot afford to support a larger family.

A left idea of family means recognising that care isn’t solely about parent and child. It will focus on providing support to carers of any dependants, including parents, siblings and partners, both through direct benefits and by creating a National Care Service.

A commitment to family would lead with chucking out hostile environment policies such as the income threshold for non-EU nationals to be allowed to marry and make a home together. Anti-immigrant policies have split lovers, parents and children apart, violating the human right to family and creating a hierarchical system where British nationals have greater rights than those migrating to the UK.

It, of course, prioritises equality for LGBTIQ couples and families. Equality goes beyond marriage rights and builds a safer and more equal society for all family relationships. This has to include the right for LGBTIQ couples to access IVF without having to jump through impossible hoops to have a wanted baby.

And, in a real rebuke to the far right, a left definition of family rights means the choice not to have a family at all – so decriminalised abortion which gives women control over their own fertility and full bodily autonomy. Similarly, making Labour the party of family would mean ensuring women (and men) always have a real choice to leave an abusive or dangerous relationship – that again involves a strong welfare state and a fully-funded refuge network.

Of course, Labour has always been the party for the family. That’s why it’s so frustrating to see the concept of family rights co-opted by the right.

After all, Labour is the party that, as mentioned above, recognised that my family wasn’t “pretend”. It’s the party that introduced radical pro-family economic policies such as Sure Start, child tax credits – and with women MPs who persuaded male-dominated ministries that family-centred policies mattered and should be central to any government agenda.

When Starmer talks about Labour being for the family, he isn’t (or shouldn’t!) be offering a dog whistle to those who believe family is a private, domestic household matter where a patriarch has ultimate authority. Family is about society – it’s care and welfare and education and work and choice. It’s time we reclaim family from the right’s narrative. Let’s make sure Labour continues to be the party for the family by offering everyone security, human rights, support, care and autonomy – no matter what the family looks like and who is part of it.

Sian Norris is a writer and journalist specialising in women’s and LGBTIQ rights. Her book on the far right’s assault on reproductive rights will be published by Verso in 2022.