Students are angry at being locked into 'exorbitant' contracts - despite teaching being moved online. Universities are in a bind. 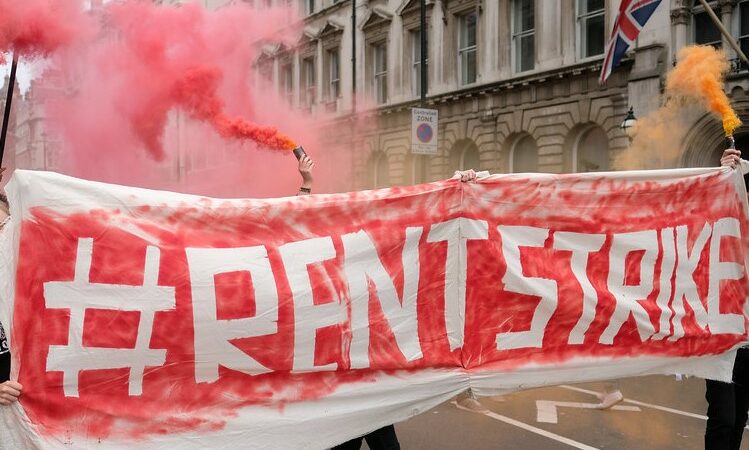 Students at the University of London (UoL) are set to join a wave of rent strikes taking place across UK universities.

Organisers at the federation of London universities are demanding 40% rent reductions, amid growing anger at being locked into expensive rental contracts while teaching has moved online.

Lectures at all English universities moves online from this Wednesday. Many students took advantage of a ‘window’ to return home last week – but remain stuck in ‘exorbitant’ rent contracts with no get out clause.

Students in London face rents at levels higher than the average student maintenance loan, with rooms often costing £10,000 a year or more.

Organisers of the University of London rent strike – which was launched at the weekend – say they have been subjected to ‘arbitrary’ whole-floor quarantines, and eviction threats for alleged breaches of university Covid rules.

One of the rent strike organisers, LSE student Emerson Murphy (19), told Left Foot Forward that the pandemic had made the problem of high rents clear. “Students are unable to find jobs, loans don’t meet the cost of rent, and tuition fees leave nothing left. The university has encouraged students to move into halls – despite knowing student life would be almost completely online. Students are being used as cash cows.”

Murphy added that it is the fault of how higher education is structured, with universities highly reliant on rent after years of cuts to public funding.

University of London students will officially begin withholding rent from January. Around £100,000 in rent has already been pledged to be withheld, with plans to rapidly increase the number of sign-ups.

Murphy said the campaign was aiming for several hundred students to take part, and will only go ahead if 100 sign up. They say they have had no response from the UoL so far.

“There’s no option to cancel your [rent] contract – you have to find someone to take your place. The vast majority not able to do that,” Murphy noted. Contracts run for the duration of the academic year.

England’s university sector among the most reliant on private funding in all of Europe. University of London rent strikers are demanding:

Activists have protested at conditions in halls during the last lockdown, with complaints over a lack of food and with students unable to leave.

Student rent strikes took off in April during the first lockdown at University College London, and have since spread across the country. The universities of Manchester and Bristol are among those currently facing rent strikes.

The National Union of Students is supporting the rent strikes, which are being backed by organisations such as Liberate the University and Rent Strike.

The actions represent the largest wave of rent strikes in the UK in 40 years. As the NME has reported: “At least 20 rent strikes currently underway or being organised on campuses, while other institutions such as Goldsmiths, University of London, and Edinburgh and Cambridge universities are preparing to take action. Last month, Manchester University cut rent in its halls by 30% for this term following a successful mass strike.”

UPDATE 9th December: A spokesperson for the University of London told LFF: “We work closely with the GLA and other organisations on initiatives to make rents more affordable for students across London. We offer a number of catered halls at a variety of price points, and offer a range of flexible payment options, scholarships and hardship funds to support students who are struggling.

“Our staff have worked incredibly hard to protect the health of students in our halls. We have had lower levels of Covid-19 than many other universities, and in large part this has been due to the careful behaviour of students, the support/ advice they have received from staff, and our close working relationship with Public Health England.

“In regard to quarantine, we have always followed Public Health England Guidance. That did initially advise isolating floors, but this advice was modified in mid-October.  In order to further reduce students in isolation, in mid-October we also developed our own contact and trace service. This reduced the number of students in isolation by 75%.  We do not hold NHS Test and Trace data.”

The spokesperson added that no one has been evicted for non-payment of rent.

Responding to concerns about lack of hygiene and toilets being shut for months, they added: “We have had problems in one block with toilets where antiseptic wipes were flushed. This has been repaired several times, but continues to be a problem. We are therefore making a major change to plumbing in this block to deal with the issue. Alternative facilities have been made available to residents.”