Trying to shift the blame? 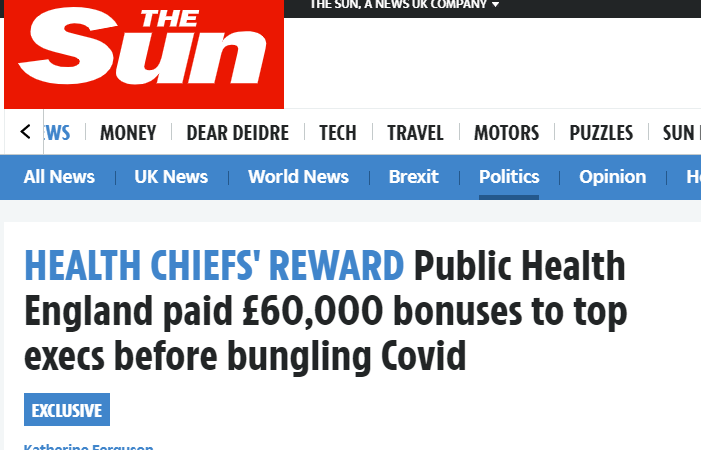 Since the pandemic first hit the UK, the government and their media cheerleaders have been looking for someone to blame for the UK’s huge death rate.

Like many Taxpayer Alliance ideas, this criticism was taken on by the government itself. In August, they announced they would scrap PHE and replace it with a new body chaired by Dido Harding – the failed ‘test and trace tsar’ and Tory MP’s wife.

This provoked a huge backlash from public health experts. Bolton’s Director of Public Health re-tweeted a tweet saying: “Appears to me that public servants and public service organisations can be sacrificed in order to protect or advance political careers/interests.”

But the government persisted. Now, the Taxpayers Alliance and the Sun have worked together on a hit piece. “Public Health England paid £60,000 bonuses to top execs before bungling Covid” screams the Sun’s headline.

Second, there’s the hypocrisy. A Sun editorial says that PHE leaders are “lavishly paid”. They’re not wrong. One PHE director gets £260,000 a year. That’s more than 99%+ of the population but it’s pales in comparison to what the Sun’s bosses get.

According to its latest accounts, the unnamed highest-paid director at The Sun’s parent company News Corp UK & Ireland gets £2,700,000 a year. Ten times what you can earn after decades of public service and scientific excellence at the top of PHE.

Most importantly, what they got paid has nothing to do with how they handled coronavirus. Nobody is saying PHE is perfect and Left Foot Forward has reported on their gaffes but the government is the reason we have the fifth highest death rate in the world. Everything else is a distraction.