One young woman was knocked unconscious and could have been killed. 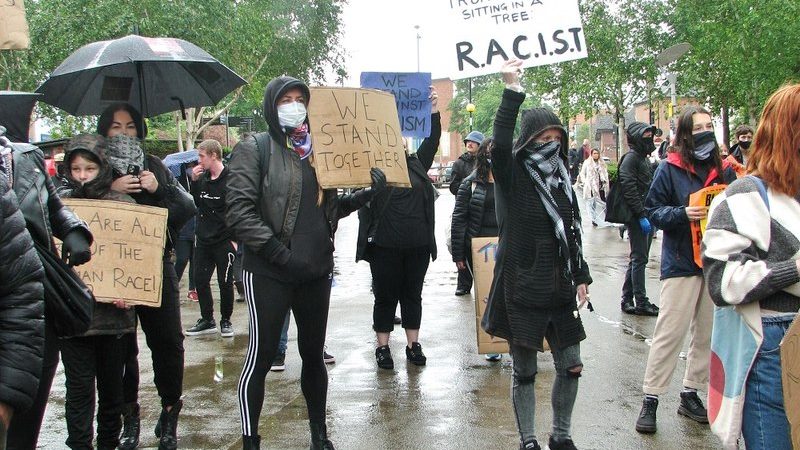 Metropolitan police officers endangered Black Lives Matter protesters by denying them medical treatment and charging horses at them, a report has claimed

The Network for Police Monitoring has compiled evidence from protesters and legal observers at the Black Lives Matter protests across the country this summer.

In one incident, police charged horses into a crowd of around 100 protesters. The report claims “there appears to be little reason for this charge, except to disperse a peaceful crowd”.

It was raining heavily, the ground was slippery and one officer fell off their horse, which then ran free and knocked a young black woman unconscious.

The woman, a student nurse called Jessie Tieti Mawutu, told ITV News: “I was told I was unconscious for a few seconds, I could just see a whole crowd around me – my sister crying over my shoulder. She was shaking me, trying to get me up. I just screamed in pain, if I’d have made one wrong move then that horse would have killed me.”

According to the report, it was the protesters not police who came to Mawutu’s aid. The next day, she contacted the police the next day to report the experience and that her mobile phone had been smashed by the horse. The police said she should get “your people” to pay for it, the report claims.

Mauwtu’s injury was not mentioned in the police’s statements to the press and most media reports failed to mention it, focussing instead on the police officer injured falling off her horse.

The report found this was just one of “multiple reports of officers failing in their duty of care towards sick or injured protesters”.

The report claims a young woman who was having an epileptic fit was arrested “for no apparent reason”. The woman’s friends told police about her fit. They reportedly laughed and said she still had to go to the police station.

In another alleged incident, a 16-year old black boy was attacked by far-right activists. He was hit with a bottle and punched and kicked on the floor. When the boy escaped, he asked the police to be escorted to safety and for an ambulance to be called.

The officer said the boy’s injuries were not serious and he didn’t have time to help him but, the report says, “the officer did find the time to stop and search the bloodied and traumatised teenager”. A member of the public then escorted the boy to another police officer who did call an ambulance.

According to a legal observer, an East Asian man who was not part of the protest was also attacked by the far-right. He was punched in the face and his glasses broke. The police refused to help him and were not interested in his report of a crime, the legal observer said.

This violence was allowed to happen, the report claims, because a far-right demonstration by the ‘Democratic Football Lads Alliance’ was under-policed, at least early until 1-2pm.

According to one witness: “There were so few police present that they were unable to protect journalists or passers-by attacked by the crowd, and the one time I saw them attempt this the police line fell apart in moments.”

While protests took place across the UK, the police’s actions in London and Newcastle are singled out for criticism in the report. In Newcastle, police refused to sanction Black Lives matter or left-wing protests while allowing the far-right to gather.

On the other hand, Bristol police’s non-violent response to the taking down of the statue of Edward Colston is praised in the report as “no violence or harm [came] to the public, protestors or the police”.