We've banned eight million people from voting, for a start. 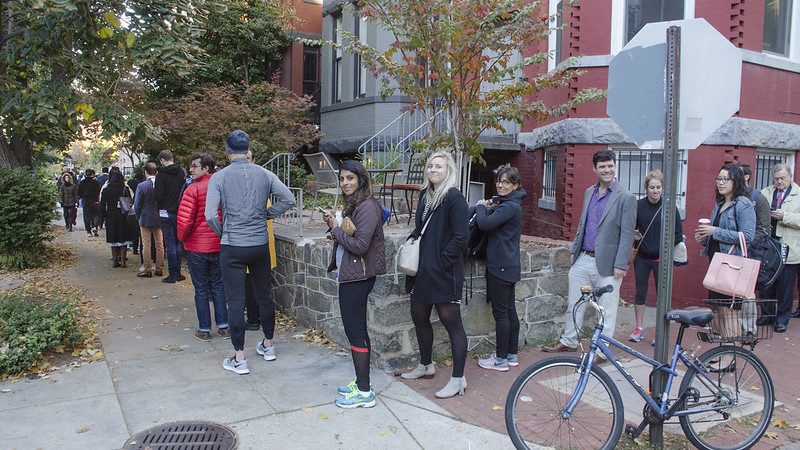 Watching the US election results, us Brits have many occasions to feel smug. We’ve never waited hours “in line” to vote. We don’t have to make sure our signature is in the box and matches our other signatures on record. And we wouldn’t dream of allowing our leader to be annointed without Lord Buckethead in attendance. It just wouldn’t be right.

But, while we don’t have quite the vicious racist history of voter supression they have in the States, our smugness is misplaced. Our elections share many of the Americans’ flaws. To start with, the UK and US are one of the very few countries in the world who vote on a working weekday. The vast majority of democracies do it on a Sunday when it’s easier for working people to get to the polls.

The effect of this is to discourage working people from voting. The midwife gets back from a long shift at 9pm. She changes into a tracksuit, pours a glass of wine and turns on the telly. ‘Ah, election day’, she thinks, before looking at the rain outside and deciding not to bother. Meanwhile, the pensioner next door was at the polling station by 10am.

And, even if she’d made it down to the polling station, she would have had to have registered to vote at her current address at least 12 working days previously. She’s moved flat twice since the last election while the pensioner next door has been registered at the same address for decades. The effect is to make it harder for young people to vote.

Here, the UK is behind many US states. In places like California, Michigan and Utah, voters can register to vote on election day itself. A 2013 report found states which allow this have a much higher turnout than states which do not.

If the government wants to increase turnout, particularly among young people, then it should do the same. But it’s doing the opposite. A month ago, a cross-party group of Lords proposed a motion requiring the government to take measures to get more young people on the electoral register. The government’s Lords voted against it. If you didn’t know better, you’d think they didn’t want young people to vote.

Then there’s all the people who live and pay taxes in a country but simply can’t vote for its leader. The US bans non-citizens (and 3m+ plus people in Puerto Rico) from voting. In general elections, the UK also bans around eight million non-citizens from from voting. There are exceptions to this. If you’re from Ireland, Ghana or Australia, you can vote. If you’re from France, the Ivory Coast or the USA, you can’t. It makes no sense and swings election results across the UK.

The US and UK also have systems where the party with the most votes doesn’t necessarily win. Donald Trump and George W. Bush were both elected despite getting less votes than their opponents. In 1974, Labour’s Harold Wilson did the same. He got less votes but more seats than his Tory opponent.

Elsewhere, the Greens got 3% of the vote and one seat while the SNP got 4% and 48 seats. This is why the nations to use First Past the Post are mainly former colonies we’ve inflicted it upon. Nobody else wants it.

So, as in the US, democratic reform of our election process is long overdue. With parliamentary constituencies now being redrawn and Scottish independence on the cards, now is the perfect time to do it.