A Facebook event started as an in-joke for friends and family tapped into 'justifiable anger', says one of the organisers. 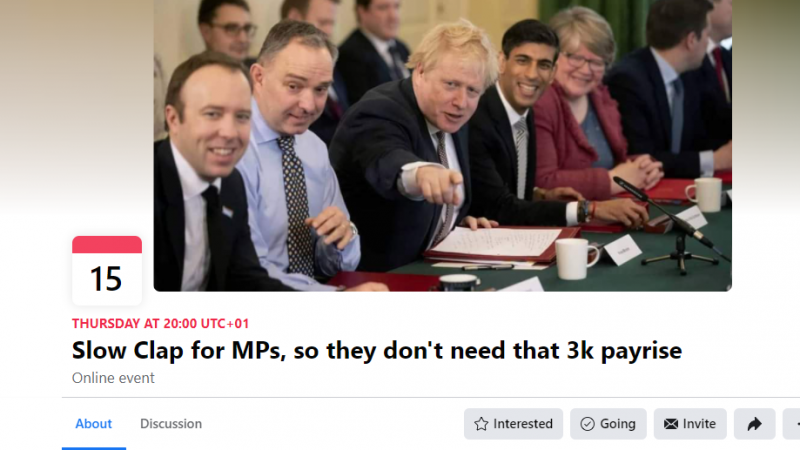 An online event proposing a ‘sarcastic slow clap for MPs’ who are set to receive a pay rise of more than £3,000 while nurses’ pay remained stagnant gained more than 25K followers overnight. Created on Sunday morning, the ‘Slow Clap for MPs, so they don’t need that 3k payrise’ attracted the attention of more than 27,000 people, with numbers rising.

Organised by Nottingham couple Steve and Wendy Barry, the page invites people to have a ‘national clap’ for MPs on Thursday evening, like the one for NHS workers and carers.

The event description says: “Those poor people have worked really hard with their additional working from home allowance this year and now feeling under appreciated have decided they need another inflation smashing pay rise from the public purse.

“Maybe a clap will do instead?

“Join me Thursday in a clap for MPs from your doorsteps to let them know how valued they are, and remind them that if now isn’t the time to talk about nurses pay it isn’t for MPs either.”

Mr Barry told Left Foot Forward that he created the event as ‘a bit of a joke’ for family and friends and it ‘has taken a life of its own’.

The dad-of-two said he believes the reason the event struck a chord was the ‘hypocrisy’ of MPs getting a raise after denying a raise for nurses and other healthcare workers amidst the pandemic.

“It is contrasted directly to Matt Hancock’s words where he said ‘now is not the time to talk about nurses pay’, in the middle of a health crisis where they are working their hinds off.

“But the money is there for them to give themselves £3,300 each.

“You can’t pay your bills with a clap,” he said.

“It was a combination of giving themselves a big pay rise after denying the nurses after we had been clapping them for months.

‘It is just cheeky, isn’t it? It is like, let’s give them a slow sarcastic clap so that they see the irony of what is going on.”

The 33-year-old pointed out that the MP salary had already increased by more than £20,000 in the last ten years alone.

“It seems to me they pocketed as much as they can from this crisis, I don’t know any other career that in the last ten years has had a £20,000 pay increase for essentially the same job,” he added.

“That is in the same time frame. And they have a lot more skills, they are on top of their career,” he said.

Unlike GP on maternity leave Mrs Barry, Mr Barry does not work in healthcare, but said that his own field of engineering has not seen anything comparable to the rise in pay scale of the MPs.

“I do my work, I pay my taxes and I don’t pay my taxes for people to take liberties with it, basically,” he added.

“And that doesn’t even go into the dubious PPE contracts.

“I think a lot of people are like me, justifiably mad.”

Anyone interested in Thursday’s slow hand clap should join here.