Left Foot Forward speaks to the writer and Corbyn appointee as he joins the second chamber. 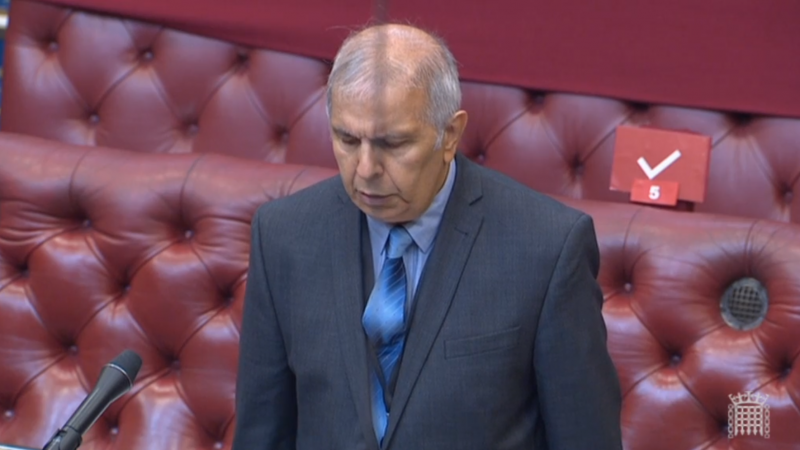 When I speak to Professor Prem Sikka, he is a couple of days into his new role as a peer, and is keeping an eye on amendments to the government’s Parliamentary Constituencies Bill. Calls keep coming in about the votes.

The House of Lords is a strange place at the best of times, but the left-wing accounting professor joins the unelected chamber in especially tricky circumstances. While he can’t yet speak in debates until his Maiden Speech, he can join the virtual division lobbies.

In contrast to the government’s 80-seat Commons majority, the political arithmetic in the Lords is a different story. Prem cast his first vote last Tuesday, on the Immigration Bill and the right to asylum. The government was defeated by more than 100 votes – though Priti Patel and her Tory colleagues may overrule it when it’s back in the Commons.

Prem joined the chamber alongside ex-Labour MP (and Corbyn critic) Frank Field. Both eschewed the traditional robes in their ‘introduction’ ceremony: ‘I said I feel comfortable as I am’, he tells me. Nonetheless, it’s a ‘bewildering place’ for anyone from a working-class background, stuffed with arcane traditions and pageantry. How did he get there?

Prem arrived with his family from India in 1966: “There were two big important events that year. England won the World Cup, and I arrived in the UK!” He went to school for just two years, leaving in 1968 with no qualifications, before landing a job as an accounts clerk at an insurance broker in London’s Aldgate. Studying part-time, he gained his O Levels and A Levels, before training to become an accountant.

He was becoming more political. “My father, mother were working-class people – and work killed them in the end.” His mother was just 53 when she passed away. His father, who had been a Labour activist, was 59. “British workers work some of the longest hours in Europe, but they get a raw deal,” Prem says.

After qualifying as an accountant, Prem went on to work for some major corporations, before joining academia. Activism and academia soon became entwined, as he set up the Tax Justice Network: “We succeeded in getting the message out about tax avoidance being wrong.” Translating complex scholarly ideas with left-wing messaging inevitably brought him into contact with politicians.

“Initially I approached Tony Benn, who was very helpful and very interested”. Through allies of the late socialist, Prem got involved in what is now the Campaign Group of left-wing Labour MPs, of which rowdy backbenchers Corbyn and McDonnell remain members.

Prem held fairly regular briefing sessions with them, while ‘the left was in the complete wilderness.’

Fast forward to Corbyn’s leadership, and Prem soon got closely involved in policy development work with both the then-Labour leader and former Shadow Chancellor John McDonnell – on tax, corporate governance, and executive pay.

The Emeritus Professor of Accounting at the University of Essex had built a profile over the years through widespread media work (including a weekly column for Left Foot Forward), as well as high-profile investigations into major bankruptcies and accounting scandals such as those at Carillion and BHS.

Prem’s appointment was one of the few nominations that Jeremy Corbyn got through the Lords – former Corbyn official Karie Murphy was among those rejected by the appointments commission.

“It was a complete and utter shock to hear that I’d been nominated – it was not something I’d ever sought in any way,” he says.

“My initial thought was ‘no, this is not for me’. My second thought was it could give a platform to issues which are ignored, marginalised, and routinely swept under the rug. I took over a week to decide.” He came down on the view that it was better to have someone from the left in there, than not. Johnson has made dozens of new peerages, including for Tory donors.

Though still smarting from December’s defeat, the Labour party has now definitively shifted to the left. Prem’s energy and anger will remain directed at booting out the Tory government: “We need to reshape society and common sense: to make people feel that empathy for other humans is right, and that we have public services, fully funded and in public ownership…It’s on that basis people can succeed.”

Instead, elections have been fought (and for the left, lost) ‘on the terrain created by the right’. Prem wants to learn from the so-called spirit of 1945: “At the end of the Second World War, we remade common sense to say ‘we’re not going to back to squalor again’.”

Can Keir Starmer turn around Labour’s fortunes? “It’s early days. He is relatively new. He’s doing pretty well in Parliament, but that doesn’t necessarily translate into doing well for the people.” Starmer has retained many of Corbyn’s left-wing policies – including abolishing the House of Lords – while gaining in the polls.

Towards the end of our conversation, a message comes in. The government is defeated by 95 votes on an amendment to the Parliamentary Constituencies Bill, which critics say could lead to gerrymandering.

With around 800 unelected members, the Lords is the largest second chamber in the world. There’s no doubt that it’s bust. Until reform comes though – “and I hope I’d be able to vote for that within my lifetime” – it’s one platform to challenge ‘utter bloody incompetence from the government’, as this socialist academic puts it.

Josiah Mortimer is co-editor of Left Foot Forward. Prem Sikka is a regular columnist for the site.