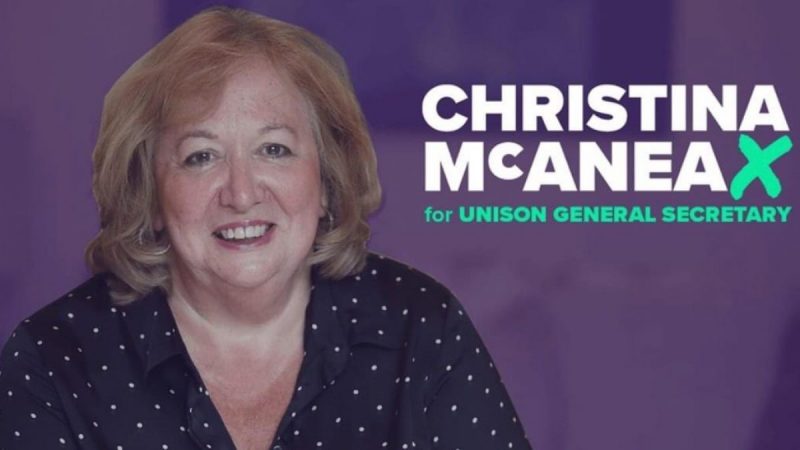 Christina McAnea is one of four candidates to be the general secretary of Unison, the UK’s largest union with 1.3m members, largely representing public service workers.

Left Foot Forward spoke to her and is hoping to conduct interviews with all four candidates who secured enough nominations. Voting starts on October 28th and the results will be announced on January 11th.

This is the second part of our interview with Christina McAnea. Read part one of the interview here.

What political direction do you want to see Unison going? Are you close to Keir Starmer?

“We try and influence the policies of the Labour Party rather than the other way round. I would support Keir where I could, provided I thought it was heading in direction beneficial to Unison members. We would support the party on issues we support. Where they bring in policies we don’t support, we would campaign against them – across the UK.

“Devolution is a fact: it’s not just Scotland, Wales and NI, it’s the influence of the Metro mayors too. More issues are being decided at a local and regional level. We need to decentralise and give more flexibility.

“[Members in] the devolved nations already have an element of that, but perhaps not enough. We could have more freedoms and responsibilities for them. If something happened in Greater Manchester – I’d expect our regional office to respond to that, and that they had the resources to deal with that. We’re a bit like a juggernaut sometimes [moving slowly].”

Would you hold back cash to Labour if you disagreed on policy?

“That would depend. We have a structure depending on how many members check the affiliation box. There’s this perception that the General Secretary becomes this all powerful figure – the GS still has to follow union rules set by members, conference, and NEC.

“No one who comes in as GS can suddenly say ‘I will stop this’ – one [area] in particular is our political fund. I strongly believe that decisions on Labour Link should only be taken by members of the Labour party.”

Do you mean only Labour members should sit on the Labour Link committee?

“I think if you’re not a member of Labour you shouldn’t decide on that.”

“It’s gesture politics. It’s means very little to most people. And it runs counter to what we as trade unions do. We argue all the time people should get the rate for the job…so this is an empty gesture people say.

“All the candidates will take the money…what they then decide to do with it is entirely up to them…I may well decide to give some to charity, but I won’t advertise that.”

Would you do a live-streamed national hustings, as Roger McKenzie is calling for?

“So far the hustings haven’t seen to have done a good job to bring in women. I’m sure there are far more innovative things to boost participation. Hustings didn’t particularly help with participation.

“Some candidates did online events…none of them attracted many participants from what I saw. If I’m wrong, I’m happy to take part in it. But at this point evidence doesn’t seem to suggest it will do more to get people who don’t take part in the other hustings to take part. They’re predominantly men.”

“We should learn lessons from other orgs that have gone out of the way to attract other groups to get involved in the democracy of the organisation.

Are you confident? Is it a shoe-in?

“It’s not a shoe-in. I’m incredibly grateful that I’ve got so much support, including from the national women’s committee.

“I’m really grateful for the level of support I’ve had. The key is whether people will return their ballot papers, when that ballot paper drops through your letter box. I’m not complacent…I’ll be continuing to campaign and get my message out.

“Unlike Labour elections, we don’t have access to members email or phone numbers. Our only access is the election address [sent to members]. Branches get up to 100 words when they nominate you to all members. They can’t say ‘we encourage you to vote for Christina.’

“I’ve got 211 branches to urge to send out 100 words! And hopefully nine regions will too. It’s the first time we haven’t had an incumbent for a number of years. Dave Prentis has name recognition which none of us has got. Even Roger…I don’t think either of us, no disrespect to Roger [have recognition]. Dave Prentis has been around for so long.”

Dave Prentis has been union leader for nearly 20 years. Is it the end of an era?

“It will be different regardless of who gets it. Obviously, there’s things you want to do that are very different. It’s definitely the end of an era. It’s a very difficult time…coming out of the pandemic, the economy is going to crash. It will be public sector workers who have to deal with it. They’re funded through the public purse and have to pay the price as well.

“I only started seriously considering this [candidacy] less than two years ago, I’d say. Now I’m glad I did it. I’m a steady pair of hands, I’ve been there and done it. I took the first strike in the NHS in over 20 years over pay, and forced the government to back down. I’ve led national negotiations in almost every part of the public sector apart from the civil service. We need someone with that solid trade union background.”

Could major strikes be on the cards?

“There could be. Legislation always makes that difficult. It’s not impossible, and we’ve shown we can do it locally…I wouldn’t rule out national industrial action.

“If I had to hear some of the other candidates talk about the RMT or the miners one more time though…Our members do jobs which mean they’re essential workers. Most of our areas, you have to organise emergency cover. That completely changes the atmosphere. When our ambulance workers go on strike the government brings in troops.

“That’s how serious the government takes it. So, I don’t think we should bandy around the words ‘national strike’ in an easy fashion. You have to take the members with you. That’s the question.”