They say the restaurants profit from Deliveroo's bad employment practices. 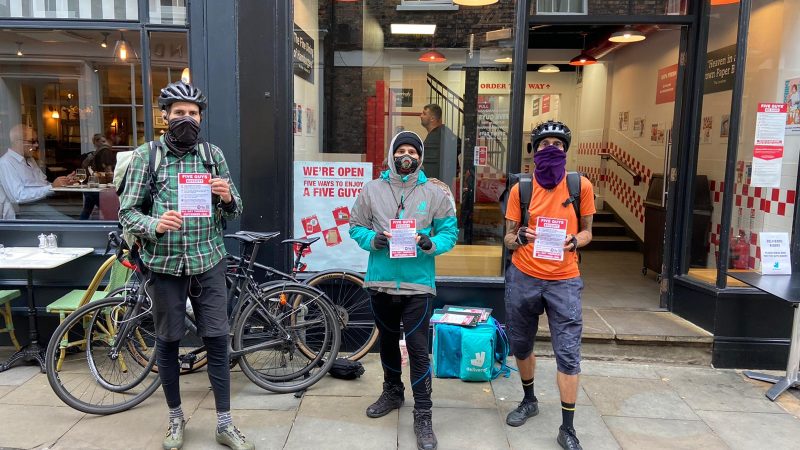 Deliveroo couriers in York and Sheffield are boycotting Five Guys and Wagamama today as they accuse the restuarants of profiting off Deliveroo’s bad employment practices.

Couriers in York are boycotting Five Guys from 11am to 11pm today over long waiting times at the burger chain. The couriers want Deliveroo to pay them for this waiting time.

One of the couriers from the IWGB union, Cristian Santabarbara, said: “Five Guys is making riders wait on average fifteen and as much as forty minutes for an order. So in some cases riders will only be making one order in an hour and earning less than four pounds.

He continued: “How are you supposed to raise your children or pay your rent on that kind of money? If Five Guys wants to spend hours making each order, polishing each burger and individually slicing each onion with a precision knife, that’s fine, but they should demand that Deliveroo pay for our waiting times.

“What they can’t do is continue to profit off the back of a hyper-exploited workforce and not expect there to be some kind of reaction,” Santabarbara added.

In the evening, Sheffield couriers will also boycott their city’s Wagamama. They are calling for a living wage after costs, the re-instatement of courier Khalid Kalil and transparency and fair treatment over how couriers jobs are terminated.

Sheffield courier Dee Uddin said: “We used to be able to make minimum wage but now it has become impossible. I have to work as much as 12 hours to make just £100 and that’s before you take into account my car payments, petrol, insurance and all my other expenses.”

He continued: “On top of it all, it seems now they are just booting riders off the app for the fun of it. Khalid was one of the hardest working couriers out there and they just sacked him without giving him any evidence or a chance to appeal. Deliveroo and the big name restaurants are making millions while the riders are being treated like disposable waste.”

Speaking to Left Foot Forward three weeks ago, IWGB couriers’ national branch chair Alex Marshall claimed that riders were often sacked under false pretenses with no way to appeal. Those include being told they allowed a substitute to use their account when they say they haven’t.

Couriers in Sheffield went on strike three weeks ago but, at that time, Uddin told Left Foot Forward that many members could not afford to go on full strike and so would target individual restaurants instead.

Deliveroo did not immediately respond to a request for comment.