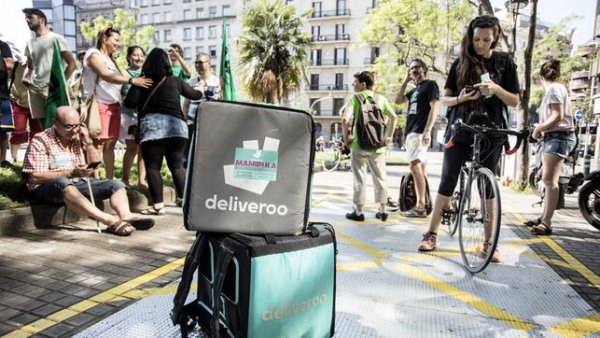 Deliveroo riders in Sheffield kicked off two weeks of strike action to demand fair pay and better working conditions on Wednesday. The gig economy workers are also protesting what they call unfair terminations in the midst of a pandemic.

They are demanding the right to appear those terminations, alongside fair pay and fair treatment by the company, restaurants and customers. The drivers, who have to cover the costs of running a car and insurance while getting no holiday pay or pensions, report being sent on six-mile trips for as little as £3.15.

Last Wednesday, Deliveroo drivers in Sheffield went on a general strike and didn’t accept any orders.

“The problem with having a general strike is that there are a lot of people who can’t afford it,” said Mr Uddin.

Instead, the workers plan to specifically target companies they say are complicit in their exploitation. In Sheffield, drivers are planning on specific days to stop accepting any orders from restaurant chain Mr Miyagi, due to long waiting times and poor treatment by restaurant staff.

Mr Uddin, who has been working for Deliveroo for three years, has seen his minimum rate reduced from £4.25 to £3.15 in that time.

When recruiting drivers, Deliveroo promises them they can make as much as £150 an hour, but Mr Uddin said that has not been his experience. He said that at best he would make £8-9 an hour, and that was before he had to cover costs such as fuel, insurance and data charges on his phone.

“The only thing we are asking for is a living wage and costs and a little bit more respect from the restaurants. When you get there you are treated like a second-hand citizens,” said Mr Uddin.

Despite suffering from asthma, Mr Uddin kept working throughout the height of the pandemic.

“When the country needed us we stepped up,” said Mr Uddin.

“The only reason we didn’t strike during the pandemic was that the country needed us. Everyone needed to do what is right.”

The driver, who works 60-70 hours per week, has been forced to claim Universal Credit in order to afford to take care of his family.

“This is the first time I had to have help from the government because I am not earning enough,” said Mr Uddin. “We are the backbone of the company. If we stop working, that is your Deliveroo done.”

IWGB couriers’ national branch chair Alex Marshall told Left Foot Forward that riders were often sacked under false pretenses with no way to appeal. Those include being told they allowed a substitute to use their account when they say they haven’t.

“Everyone has been clapping for these key workers like delivery drivers and instead of being rewarded at the end of the pandemic they’re being punished by their companies with this really poor treatment.”

Mr Marshall stressed that a general strike is not sustainable for Deliveroo drivers, who won’t be able to maintain momentum after days of seeing their earnings cut to zero. But targeted boycotts aimed at specific restaurants are a good way to indirectly put pressure on the delivery giant.

“It has proven to be quite an effective tactic to get involvement from riders,” he added.

The goal, said Mr Marshall, is for what is happening in Sheffield to become ‘infections’ and lead to solidarity actions nation-wide.

Actions during the two-week protest include further targeted boycotts, flyers to raise public awareness and a possible demonstration driving around the city.