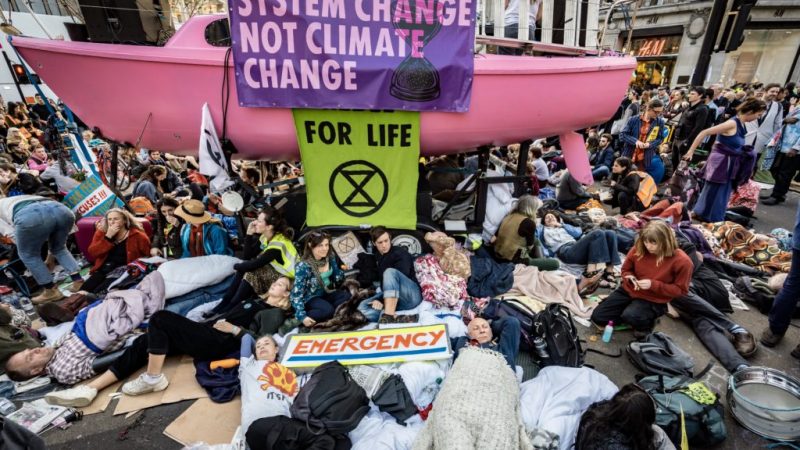 There was a tweet from Extinction Rebellion doing the rounds on Wednesday, which caused a stir on the left. In it, they suggest that XR is not in favour of socialism. They are, instead, in favour of a Citizens’ Assembly to determine a response to climate breakdown.

Superficially this is disappointing to someone who is a fan of both participatory tools like Citizens’ Assemblies and as someone who is a socialist. But it points to an important debate about strategy that the climate movement needs to have.

A Citizens’ Assembly is a participatory approach that takes a demographically balanced group of citizens and allows them to create proposals for a way forward. In Ireland this helped to deliver the long-running demand for equal marriage.

It’s not hard to work out why this approach appeals to some in XR. There has been a sustained and very effective attack on ideology over the past 40 years. This has left many to believe that socialism is unhelpful, a barrier to progress, and something that will get in the way of the change we really need. I believe none of that. But it is what we are told every day of our lives, and it’s unsurprising that this is what people believe.

For some, the response has been to attack the concept of the Citizens’ Assembly. This is also a problem. Throughout the twentieth century, the socialist movement actively fought the capitalist class, using mass mobilisation to win on many occasions. And it is attractive to believe that this is still something we can achieve. Indeed it is important to make the case that progressive change – from winning the vote for women to ending apartheid – is possible.

But we aren’t in that situation. As we saw in the UK in last December’s election, and in the US in the 2016 Presidential election, we can no longer rely on workplace and community organisation to drive change. Many voters in both 2016 and 2019 fell for the false promises of Trump and a Tory Brexit. They did this because the right has become much more effective at campaigning, creating fear and delivering electoral victories for Trump and Johnson.

A significant part of the right’s approach is to make politics so undesirable that only those with the thickest skins want to get involved. They do this through the sort of Trumpian attacks on opponents, through militaristic language and by whipping up culture war issues like what songs are sung at the Last Night of the Proms.

So we need to find a different way of doing politics. Part of that is a return to the mass politicisation of the 20th century. And during the pandemic we have seen that this is possible, with the rise of Black Lives Matter. But we also need to show people how politics can be done differently.

Part of the attraction of the Citizens’ Assembly is that it has resolved political issues in Ireland that were too difficult for the politicians. Of course, we can say that the Government should have just done the right thing and created equal marriage and given women the right to choose. But that’s to deny the reality of politics. And the Citizens’ Assemblies have delivered not just the change that was so desperately needed, but also loser’s consent. There is no movement to reopen these decisions.

The climate emergency is like equal marriage and abortion were in Ireland. It’s something a substantial majority want dealt with. It’s also something that significant minorities contest. That’s why a Citizens’ Assembly is attractive. It can create a set of practical measures that address the crisis, and that has value.

The Citizens’ Assembly on Scotland’s Future is turning out consistently radical proposals. It is doing so in a way that is bringing many people onside who would not otherwise have agreed to these. It is a better way to do politics. And it is important that we model new ways of doing politics. This prefiguration of a better politics is vital.

We know that market dogmatism is incompatible with halting the climate emergency. Big business has spent substantially more time, money and attention on creating conspiracy theories about how the climate isn’t changing than they have doing anything to deal with the climate emergency. Any solution will require curtailing the market to save humanity.

We need both socialism and a citizens’ assembly. But most importantly we need to understand how they should work together to create demands, mobilise society and design solutions.

Peter McColl is a Scottish Green Party activist and the former rector of the University of Edinburgh.