We need to move away from seeing nature as a resource to be plundered - and instead start re-building our ecosystems. 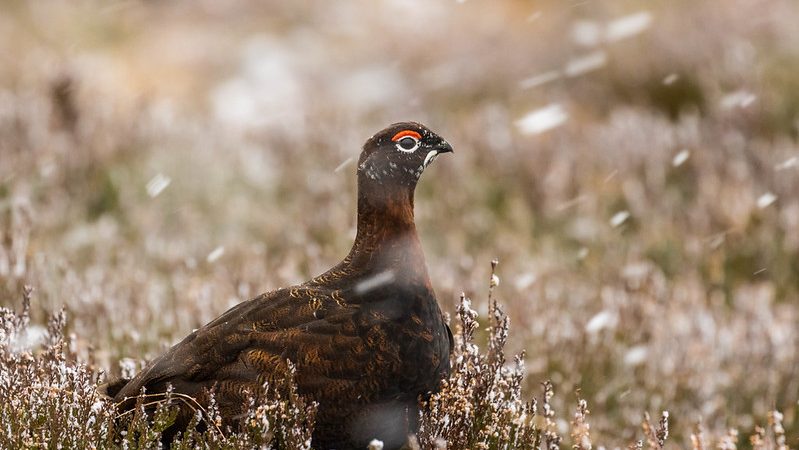 Today is usually the ‘Glorious Twelfth’, the day that a few (mostly) men in tweed take to the uplands to blast away at innocent, inoffensive red grouse.

But the signs were last night that it could be a, almost, a Glorious Twelfth: news from the moors is that many moors don’t have what’s called a “shootable surplus” of grouse.

In the peaceful silence of the moors where shooting isn’t happening today can be heard a message: that we are nearing the end of this so-called “sport”.

It’s good news for huge numbers of animals that are now legally slaughtered – corvids and mustelids, foxes and mountain hares – to maximise grouse numbers. Grouse are some of the most charismatic, wonderful wild birds to feature in our landscapes.

Blame for the lack of grouse is being spread widely. Chief Executive of the Countryside Alliance Tim Bonner is primarily attributing it to a wet spring and cold start to summer.

Mark Osborne, a North Yorkshire land agent, in the Yorkshire Post is giving top billing to a “plague” of heather beetle of “biblical proportions”, and bans on burning the heather, a traditional practice for managing driven grouse moorland.

Yet planned burning on the moors is clearly on the way out. Increasing numbers of institutional landowners are changing leases to forbid it, and the Westminster government is supposed to be bringing in a ban on burning blanket bog.

The chief reasons for ending burning are often given as reducing carbon emissions, protecting water quality and reducing flood risk. Those are all good reasons. But it also means saving all the invertebrates, reptiles, mammals, plants and mosses that are incinerated in the blazes – part of the explanation for the incredible lifelessness of our moors.

Mr Bonner typically tries to suggest that if we don’t have grouse moors we’ll get conifer plantations, which has happened in the past, often due to misdirected government incentives.

But we are heading into a new age. The House of Lords last month spent 60 hours debating the Agriculture Bill, which introduces the principle of what’s known as “public money for public good”, paying land managers to provide environmental services.

The details of that remain unclear – and the Lords, with campaigners, will continue next month the push for wider, stronger, clearer areas and levels of support. But it is certain that, particularly on the uplands – parts of Britain over 1,000ft high – there is huge potential for Environmental Land Management Schemes (ELMS) to pay for carbon storage and retention, and support biodiversity and abundance.

And there’s also huge potential for ecotourism. The charismatic megafauna now being destroyed (such as golden and sea eagles) to artificially boost grouse numbers, and the biological diversity of a landscape not shaped by heather monoculture, can be restored.

Decades of increasingly intensive management for driven grouse shooting have left the uplands in a parlous state. Each year the peat lands, mostly in the uplands, release the equivalent of the greenhouse gas emissions of 140,000 cars. Natural England estimates that just 4% are in a good condition.

Shooting up the agenda

And the illegal persecution of raptors associated with driven grouse moors has attracted increasing attention. On Saturday, people from around the UK and beyond got together online for the first virtual Hen Harrier Day: celebrating and defending these wonderful birds, in a way that’s not diminished by the change in format from the traditional physical gathering.

On the first such day, in 2014, star wildlife champion Chris Packham suggested it would take a decade to achieve a ban. That’s a timetable that now looks pretty well on track.

Campaigners have been building knowledge and public understanding of the plight of the hen harrier, and the mountain hare – whose slaughter has just been banned in Scotland due to great work from the Scottish Green Party. We are waking up to the damage being done to all of us by this disastrous, indefensible use of fragile, crucial land.

This is the start of a far broader debate. Public understanding that we live in one of the world’s most nature-depleted countries is growing fast.

A chance to change

The disastrous management of driven grouse shooting moors is mirrored in many other land uses, including much of our agricultural practices, soaking the land with pesticide and herbicide, destroying the soils and the ecosystems.

So using ELMS to protect some delicate and precious areas, such as our upland peatlands, and helping them become the sanctuaries for ecotourism they should be, is part of what the Agriculture Bill needs to do.

But there are problems. First, participation in ELMS is voluntary. And when the Brexit transition period ends on December 31st, we’ll be losing environmental protections that came with that.

Just focusing on ELMS signed-up lands is not enough. We have to ensure that no land management, anywhere on these islands, is doing further damage to our ravaged landscape. We need systems that produce healthy food for us and a healthy natural environment. We need food production and nature to share every bit of land – rather than some land being spared for nature and the rest trashed.

The grouse moor owners were hoping their customers would be letting rip today. That is not a viable option. Our nation cannot afford the costs of destructive land management, where we all pay, while a few profit.